Not much remains to mark the scene of one of Robert E. Lee’s biggest military blunders.

After defeat at the Battle of Gettysburg in July 1863 and months of inconclusive maneuvers in northern Virginia, Confederate Gen. Robert E. Lee withdrew his 45,000-man Army of Northern Virginia south of the Rappahannock River to wait out the winter. He left a small force on the north bank of the river to guard a pontoon bridge near Rappahannock Station, where he hoped to compel Union Maj. Gen. George G. Meade to divide his 76,000-man Army of the Potomac and expose it to attack.

Meade divided his army as anticipated, but things didn’t go well for the Confederates. Meade sent Maj. Gen. William H. French’s III Corps to cross the Rappahannock River at Kelly’s Ford and Maj. Gen. John Sedgwick’s VI Corps to attack Lee’s bridgehead at Rappahannock Station. On November 7, Union troops brushed aside the Confederate defenders at Kelly’s Ford, while Sedgwick bombarded Maj. Gen. Jubal Early’s division at the bridgehead. The delayed attack tricked Lee into thinking Sedgwick’s advance was only a diversion, so he sent no help to Jubal Early.

END_OF_DOCUMENT_TOKEN_TO_BE_REPLACED 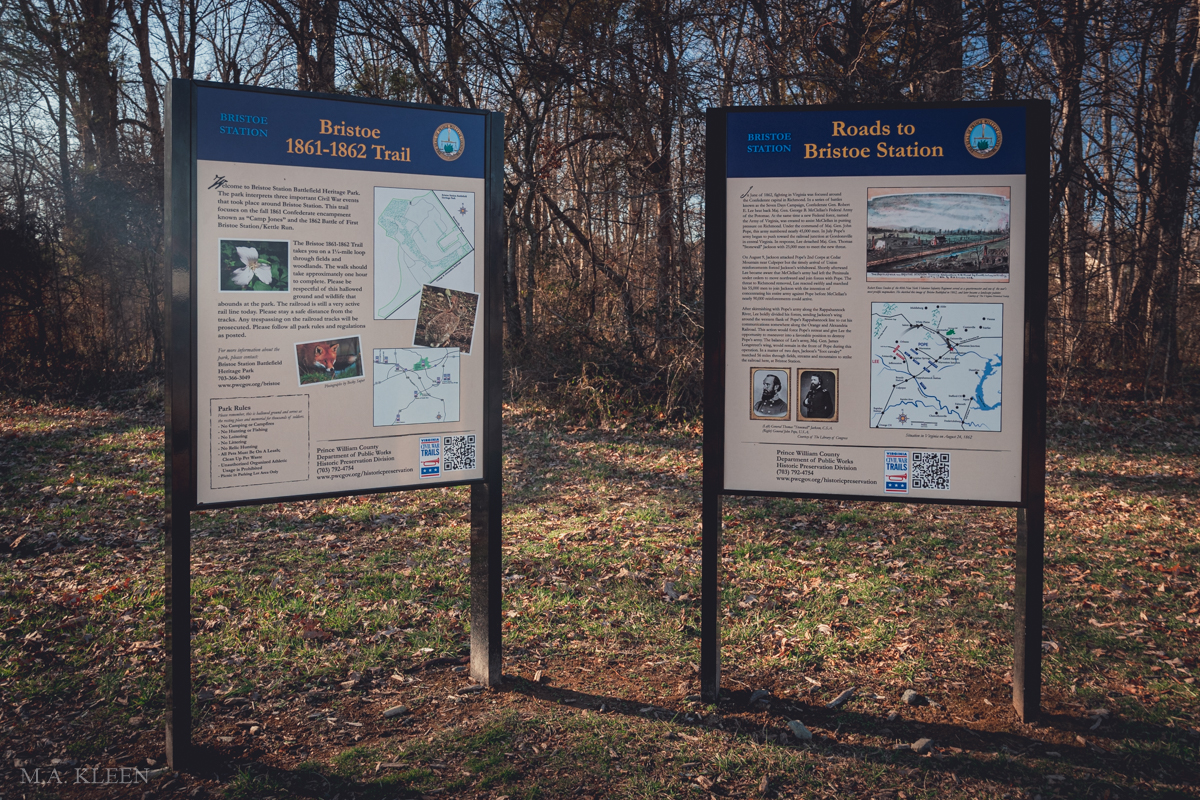 This often-overlooked prelude to the Second Battle of Bull Run saw combat between New York’s ‘Excelsior Brigade’ and the ‘Louisiana Tigers’.

The Battle of Kettle Run (aka First Bristoe Station) was fought on August 27, 1862 between Union forces commanded by Maj. Gen. Joseph Hooker and Confederate forces commanded by Maj. Gen. Richard S. Ewell in Prince William County, Virginia during the American Civil War. The battle resulted in approximately 450 to 550 total casualties and was a tactical Union victory, though Confederate forces were able to destroy two trains and miles of railroad before withdrawing.

Bristoe Station was a stop on the Orange and Alexandria Railroad, an important rail line running north-south from Alexandria, Virginia to Gordonsville. It formed the northern half of the only rail link between the Union and Confederate capitals at Washington, D.C. and Richmond. During the Civil War, both Union and Confederate armies sought to control this railroad for themselves or deny its use to the enemy.

END_OF_DOCUMENT_TOKEN_TO_BE_REPLACED 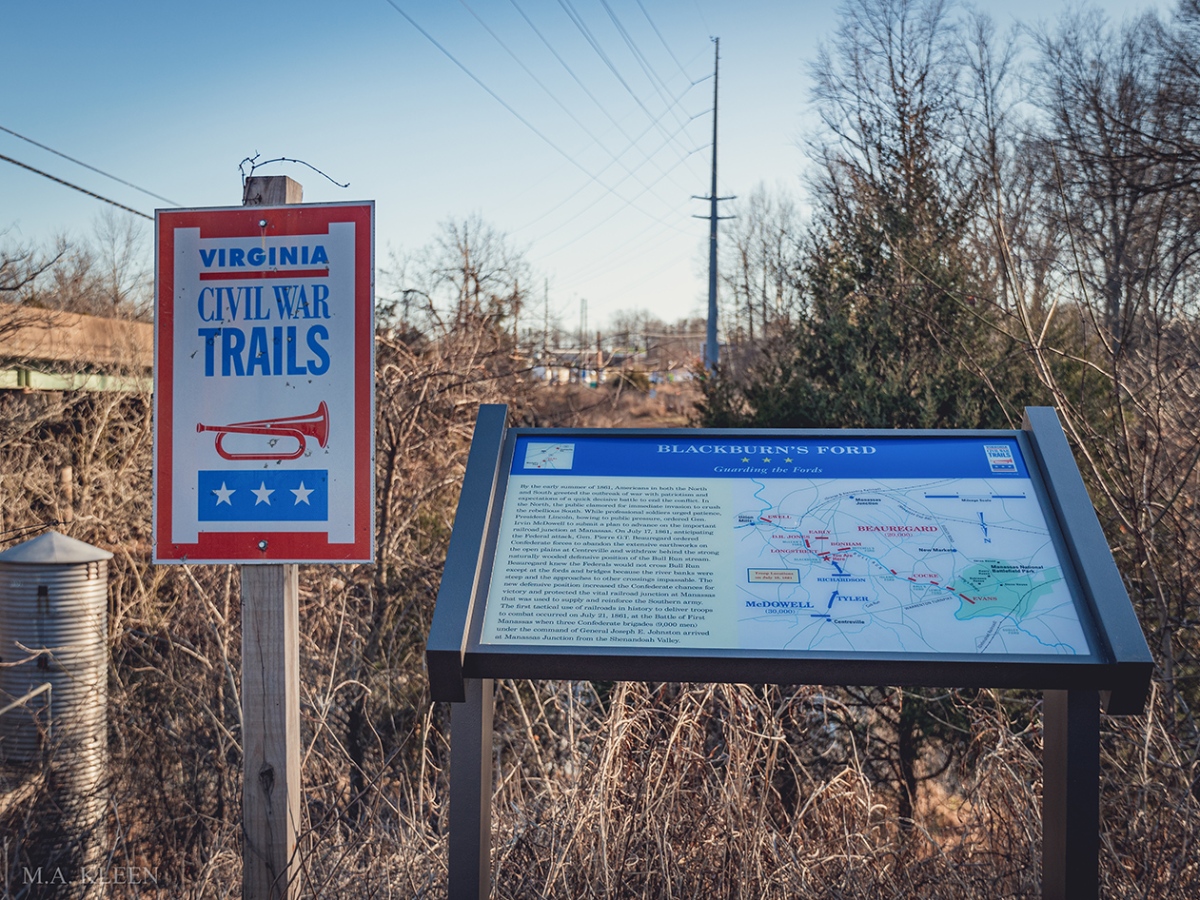 A couple interpretive signs are all that mark the location of this prelude to the first major battle of the Civil War.

In mid-July 1861, Union Brig. Gen. Irvin McDowell’s 35,000-man Army of Northeastern Virginia advanced into Virginia toward the railroad junction at Manassas. Standing in his way was the 22,000-man Confederate Army of the Potomac under Brig. Gen. P.G.T. Beauregard. At Centreville, McDowell ordered Brig. Gen. Daniel Tyler’s division to look for a crossing over Bull Run Creek at Blackburn or Mitchell’s fords. At Blackburn Ford, Tyler saw only a few Confederate artillery pieces and ordered forward a single brigade commanded by Col. Israel B. Richardson.

Tyler failed to see Brig. Gen. James Longstreet’s brigade hidden in the woods on the opposite shore. The inexperienced combatants subsequently slugged it out in the oppressive afternoon heat, until the 12th New York Infantry Regiment began to withdraw. After several hours of fighting, Union troops fully retreated in the face of Confederate reinforcements under Col. Jubal A. Early.

END_OF_DOCUMENT_TOKEN_TO_BE_REPLACED

A scenic drive will take you to often-forgotten sites of Civil War drama along the Rappahannock River.

In July 1862, Maj. Gen. John Pope’s newly formed 51,000-man Union Army of Virginia began to consolidate across northern Virginia. After a bruising at the Battle of Cedar Mountain on August 9th, Pope withdrew his army behind the Rappahannock River, where he skirmished with Confederate Gen. Robert E. Lee’s 48,500-man Army of Northern Virginia and waited for reinforcements. Between August 22 and 25, the two armies fought minor skirmishes at Waterloo Bridge, White Sulphur Springs, Freeman’s Ford, and Beverly Ford.

On August 22nd, Union Maj. Gen. Franz Sigel directed Big. Gen. Carl Schurz to cross the river at Freeman’s Ford and ascertain or disrupt the movement of Jackson’s corps. Schurz sent the 74th Pennsylvania Regiment, which captured some supplies and sent for reinforcements. That came in the form of two regiments from Brig. Gen. Henry Bohlen’s brigade. They quickly ran into Isaac Trimble’s brigade, who with help from John Bell Hood, overwhelmed Bohlen’s men and sent them fleeing. Bohlen himself was shot in the chest and killed while directing his men back across the ford.

END_OF_DOCUMENT_TOKEN_TO_BE_REPLACED

For decades, storytellers have claimed an ax-wielding “Bunny Man” has terrorized northern Virginia, but the truth might be stranger than fiction.

The year was 1904. A bus carrying inmates from the county asylum swerved along darkened country back roads towards Lorton Prison. One of the buses took a sharp turn and crashed in a particularly remote area, killing all but ten patients. Most were recaptured, except for Douglas J. Grifon, convicted of murdering his family on Easter. Since then, the carcasses of helpless teenagers and bunnies alike have been found hanging from a nearby bridge, slain at the hands of a deranged man wearing a rabbit-eared costume.

This ax-wielding bunnyman has reportedly appeared to startled onlookers as far away as Maryland, Washington, DC, and Culpepper, Virginia, but if he has a home, it’s in rural Fairfax County, Virginia near an old railroad bridge over Colchester Road. The bridge, variously known as Fairfax Station Bridge or Colchester Overpass, has become known as “Bunny Man Bridge” in popular imagination. It’s even labeled as such on Google Maps.

A remote, creepy bridge used during the 1950s and ’60s as a make out spot is like a magnet for urban legends and folklore, and Bunny Man Bridge is no exception. Though variations of common legends have taken root here, Bunny Man Bridge is unique in that at least part of the legend is based on real events.

END_OF_DOCUMENT_TOKEN_TO_BE_REPLACED

After more than 200 years, the mystery of the ‘Female Stranger’ continues to fascinate visitors to this Alexandria, Virginia landmark. Some say her ghost never left.

Alexandria, Virginia is an old town filled with historic buildings, populated by ghosts and legends. No less than 49 sites in Alexandria are listed on the National Register of Historic Places. Perhaps the most legendary is Gadsby’s Tavern at the corner of Cameron and Royal streets. Its mysterious tale of the “Female Stranger” has confounded local historians and folklorists for over 200 years.

In the late 1700s, Alexandria was the social center of northern Virginia. Charles and Anne Mason first recognized the potential for a tavern and opened a business at the corner of Royal and Cameron streets. With the end of the Revolutionary War, an entrepreneur named John Wise built a new tavern in 1785 and a hotel in 1792, red brick buildings which still exist to this day. John Gadsby leased and operated the establishments from 1796 to 1808, when Alexandria became part of the new Federal District of Washington, DC.

In those early years, Gadsby’s Tavern hosted travelers from all over the colonies, including prominent men like George Washington, John Adams, Thomas Jefferson, James Madison, James Monroe, and the Marquis de Lafayette. It was considered a premier establishment, hosting parties and balls in its large hall. It was during this heyday when the legend of the mysterious “Female Stranger” took root.