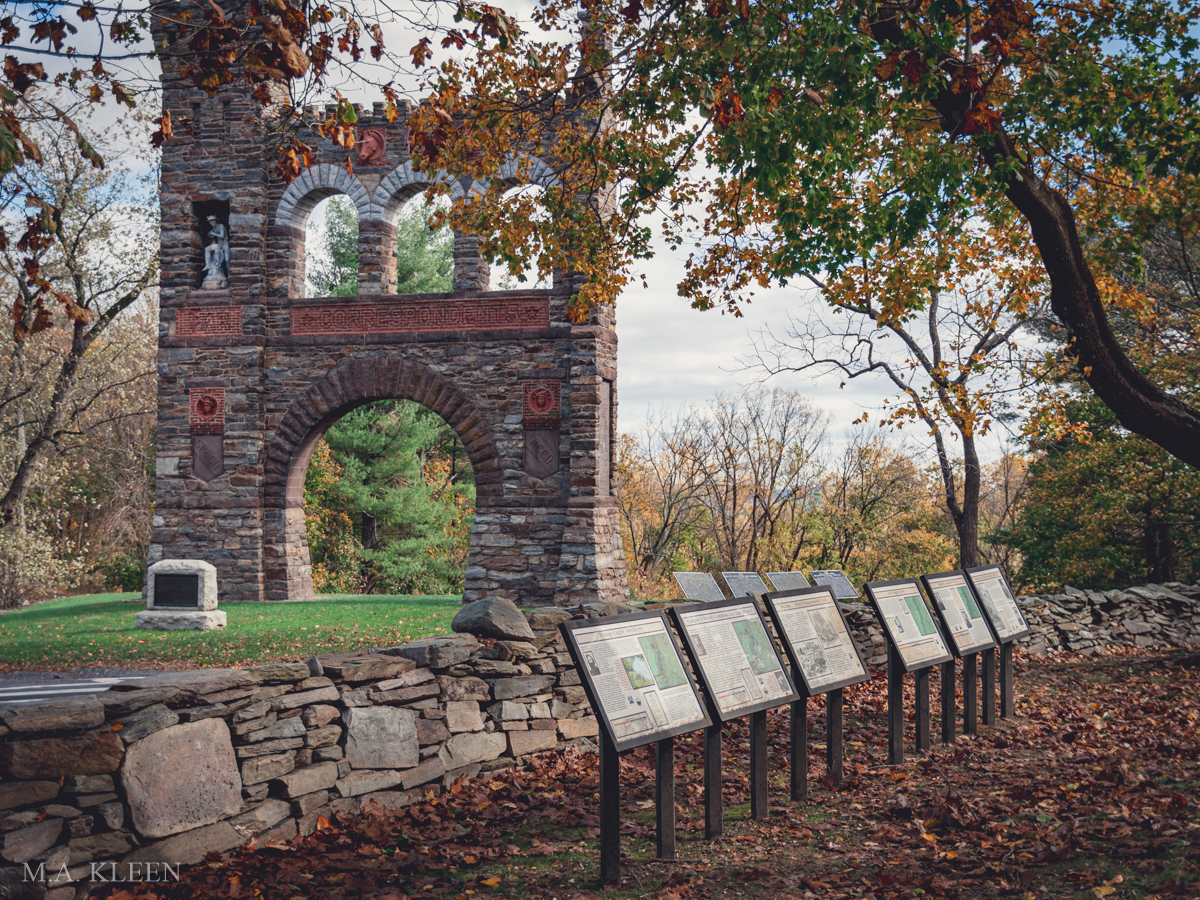 The Battle for Crampton’s Gap (aka Battle of Burkittsville), part of the larger Battle of South Mountain, was fought on September 14, 1862 between Union forces commanded by Maj. Gen. William B. Franklin and Confederate forces commanded by Col. William A. Parham and Brig. Gen. Howell Cobb in Frederick and Washington counties, Maryland during the American Civil War. The battle was a tactical Union victory, with Union troops seizing the gap but failing to relieve the besieged Union garrison at Harpers Ferry.

After General Lee and the Army of Northern Virginia destroyed the Union Army of Virginia at the Second Battle of Manassas, Lee saw an opportunity to invade Maryland, threaten Washington, DC, and possibly influence European powers to recognize Confederate independence. Lee divided his army and sent one wing to capture Harper’s Ferry, Virginia and the other into Maryland. A copy of his orders fell into enemy hands, however, and for once Union Maj. Gen. George B. McClellan acted swiftly to catch Lee off guard.

McClellan sent elements of his reconstituted Army of the Potomac to capture three strategic gaps in South Mountain, hoping to sever Lee’s army and destroy it in detail. The mountain passes were known as Turner’s Gap, Fox’s Gap, and Crampton’s Gap. Because of the difficult terrain and distance between them, the Battle of South Mountain was actually three separate engagements, though they all took place in a single day.

END_OF_DOCUMENT_TOKEN_TO_BE_REPLACED

This two-story house atop the former Moyer carriage and car factory, 1710 N. Salina Street in Syracuse, New York, was built by Harvey Moyer as a gimmick to attract attention to his business. The weathered facade hides the motor that powers the building’s freight elevator. The factory was later owned by the Porter-Cable Machine Company and then the Penfield Manufacturing Company.

This majestic granite tree is a monument to George W. Hamer (1830-1913), his wife Mary Megahan (1833-1913), their daughter Ida B. Hamer Brant (1863-1889) and her husband, John W. Brant (?-1915), and their three other children in Oak Ridge Cemetery, 1441 Monument Avenue in Springfield, Illinois. John Brant was a railroad engineer and supervisor. Ida died tragically of tuberculosis at the age of 26. Tree-shaped grave markers like this are common in the Midwest, but this one is particularly elaborate, with flowering vines, ferns, and acorns. Oak Ridge Cemetery is the second-most visited cemetery in the United States, and its 365 acres are the final resting place for over 75,000 dead.

A daring raid on Long Island loyalists results in a bloodless victory for colonial rebels during the Revolutionary War.

The Battle of Sag Harbor (aka Meigs’ Raid) was fought on May 24, 1777 between American patriot forces led by Col. Return Jonathan Meigs and British loyalist forces commanded by Cpt. James Raymond near Sag Harbor on Long Island, New York during the American Revolutionary War. The raid was a stunning success, with the Americans capturing British fortifications at bayonet point without a single casualty.

During the Revolutionary War, Sag Harbor was an important port on Long Island used to resupply British troops and launch raids across Long Island Sound on states like Connecticut. In May 1777, one such raiding party docked at Sag Harbor to join the 70-man Loyalist battalion stationed in a palisade on Meeting House Hill. Patriot Colonel Return Jonathan Meigs assembled a force of 234 men to attack the garrison and spoil their plans, although only 170 made it to Long Island.

Meigs’ small force landed in the early morning hours and divided into two parties. The first headed to the harbor to destroy British boats, and the second, with bayonets fixed, aimed to take the garrison on Meeting House Hill. The attacks took the Loyalists by surprise and only one shot was fired. The Patriots killed six men, captured 90, and destroyed a dozen boats before returning triumphantly to Connecticut.

END_OF_DOCUMENT_TOKEN_TO_BE_REPLACED

Designed by William H. Pratt and dedicated in 1849, Hollywood Cemetery at 412 S. Cherry Street in Richmond, Virginia, contains a veritable who’s who of Virginia history, including two U.S. presidents, two Supreme Court justices, six governors, and 22 Confederate generals. Its 130 undulating acres are the final resting place for approximately 65,000 people, including up to 18,000 Confederate veterans who fought in the American Civil War. The cemetery was added to the National Register of Historic Places in 1969.

This lovely, open air mausoleum contains the body of President James Monroe. Monroe (1758-1831) served in the Revolutionary War and was fifth president of the United States, from 1817 to 1825. He is best known for presiding over the “Era of Good Feelings,” when political partisanship was low. He supported recolonization of freed black slaves back to Africa, resulting in the country of Liberia, which named its capitol Monrovia after him. He was married to Elizabeth Kortright Monroe and the couple had three children.

END_OF_DOCUMENT_TOKEN_TO_BE_REPLACED

Friends share their reason for leaving (or planning to leave) the Prairie State.

Last week, I posted stories from what I call the “Illinois Exodus,” an outward migration of Illinoisans to other states. As someone who left Illinois to pursue better career opportunities, I’ve been interested in why so many of my friends and acquaintances have left Illinois for greener pastures. As of December 2019, Illinois as a whole saw six straight years of population loss. This decline has real consequences for the state’s political clout on the national stage, something its elected leaders seem not to have taken into consideration while steering it off a cliff.

As I noted before, Illinois currently has 18 U.S. representatives in Congress. In 1980, it had 24. As a result of the 2020 census, Illinois will likely see that number decline even further. The number of a state’s presidential electors in the Electoral College is also determined by population (technically it’s tied to the number of congressmen). In the 2000 presidential election, Illinois had 22 electors, while Florida (for example) had 25. In 2016, Illinois had 20 and Florida had 29.

Because Florida has seen a massive surge in growth and development over the past few decades, it will have a huge impact on the 2020 election and future presidential elections. Illinois? Not so much.

The trend is clear: the number of people moving out of Illinois is growing while the number of people moving to Illinois is declining. According to population estimates and the Illinois Policy Institute, Illinois lost the equivalent of a large city (223,308 people) between 2014 and 2019. That’s like more than the entire population of Aurora, Joliet, Naperville, or Rockford just up and leaving.

But these are only statistics. To understand why people are leaving Illinois, you have to talk to individuals and families about what is motivating their exodus. One of my friends, Tracey, now a realtor in Florida, told me taxes were a big factor for why her wife and she moved from Illinois to the Sunshine State. “I left because I was tired of the winters and tired of the taxes,” she said. “It was uber expensive and it felt like everything was taxed. Our personal property taxes were a killer… Our taxes are less here for a more expensive house. In 2014 they were $12k. When we moved here in 2015, we paid about $4500.” However, she noted the cost of insurance is nearly double in Florida.