Over the past eight weeks, we have explored RPG Maker MV, a program that allows you to quickly and easily (in theory…) design your own computer role playing game. We created a game called Mists of Tongass and learned how to create realistic interiors, design characters and enemies, and craft missions. Now it’s time to put it all together.

In case this is your first visit, here are links to previous articles and a summery of what each article explained:

If you correctly followed all instructions, your game should be ready to export. Exporting a game creates an executable file that allows it to be played on other computers. This edition of RPG Maker also comes with Smart Phone capabilities. Pretty cool!

END_OF_DOCUMENT_TOKEN_TO_BE_REPLACED

In Part VII of our exploration of RPG Maker MV, we set up shops where our hero Lucius York can purchase weapons, armor, and equipment for his quest to raise 1,000 gold pieces to spring his grandpa from debtor’s prison. In Part VI, we created his first mission and learned how to fill an area with enemy troops. In this installment, we will design a new mission, using a different method of enemy encounter.

My idea is to have a townsperson offer Lucius a mission, but instead of random encounters, several enemies will appear on the map. In order to complete the mission and collect the reward, the player will have to defeat each enemy.

To set up this mission, we’ll need to modify some features in the Database Editor. RPG Maker comes with a few default enemies: Bat, Slime, Orc, and Minotaur. We added two more: Rat and Rat King. For this mission, we’ll use the Orc. Click on the Enemies tab and select the Orc. You’ll notice the Rewards section is blank. Raise both the experience and gold to 50. 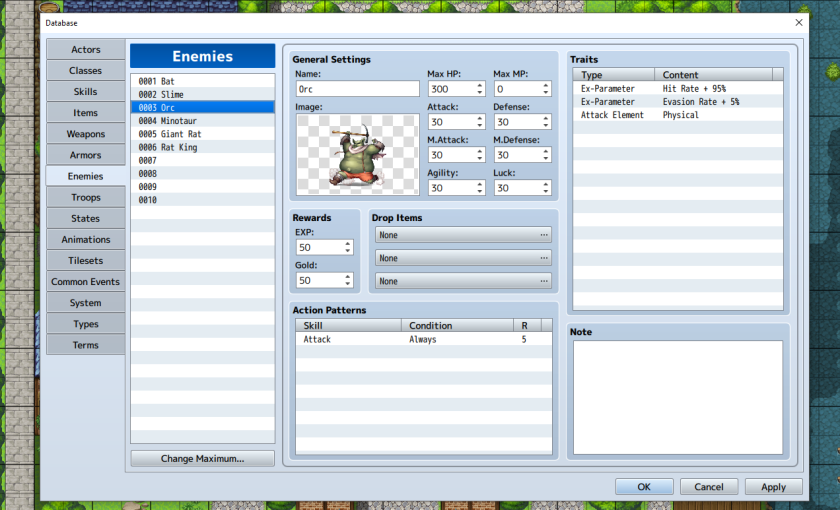 Now, click on the Actors tab and select Lucius York. In the Initial Equipment box, equip him with a Bronze Sword and Leather armor. This is will make sure he survives combat with the orcs while play testing the mission (don’t forget to undo this action before finishing the game).

END_OF_DOCUMENT_TOKEN_TO_BE_REPLACED

In Part VI of our exploration of RPG Maker MV, we set up our hero Lucius York’s first mission, created a level (house+basement), and filled it with enemy encounters. We set up conditions for completing the mission and its reward. In this installment, we’ll slow things down a bit and set up stores where our hero can purchase items and equipment for future missions.

RPG Maker allows players to control several heroes, or “Actors.” Each actor can be assigned a different class, and each class can be specialized with different weapons, armor, and skills. Our game only has one actor, so far, and we’ve already edited his class to be able to equip both swords and daggers. So the stores in our town should be stocked with weapons and armor our hero can use. This requires creating a few beyond the default that came with the program.

To get started, load the Database Editor (gears icon) and go to the Weapons tab. The maximum number of weapons should have already been changed to 10. We added the Rusty Knife in Part VI. Now we’re going to add a few more weapons, each slightly more powerful (and expensive) than the last.

I added three new weapons: Dagger, Bronze Sword, and Sturdy Sword. The Dagger’s Weapon Type is Dagger (obviously). The swords are Swords. This is all self explanatory, but it’s important for the Weapon Type to match the Weapon Types your actors are allowed to equip, otherwise your store will be offering products the player can’t use.

END_OF_DOCUMENT_TOKEN_TO_BE_REPLACED

First, we’ll need to make a small change to an event we built in Part IV. Remember Lucius was instructed to visit the jail where his grandpa is kept in order to find out how to release him. After speaking with the Constable, Lucius learned he needs to pay his grandpa’s debt of 1,000 gold pieces. But where to find that much gold? When Lucius exits the jail after speaking with the Constable, I want a new villager to appear to propose a quest.

This requires setting up a switch. Remember, a switch is like a trigger that activates when certain conditions have been met, in this case, speaking with the Constable. In event editing mode, return to the jail map and double click on the Constable. In the last line of the Contents window, beneath “: End”, double click on the empty line and select “Control Switches” from the Game Progression subheading. Add a new switch in line 0002 called “Rats!”, then click OK. Make sure the switch is set to ON, then click OK again. Click OK a third time to close out of the Constable.

Now, return to the Forest Town map. Somewhere on the road outside the jail, create a new event and choose an image of a random villager–maybe the guy with the mushroom hat in People4. Under Conditions, check the box next to Switch and then select “0002 Rats!” from the dropdown. Under Autonomous Movement – Type, select “Approach” from the dropdown. You want to make this guy hard to avoid.

END_OF_DOCUMENT_TOKEN_TO_BE_REPLACED

In Part IV of our exploration of RPG Maker MV, we created a jail interior for our game Mists of Tongass and set up the main quest and its resolution condition. Our hero, Lucius York, must somehow raise 1,000 gold pieces to spring his grandpa from debtor’s prison. To do this, we’ll eventually create another quest. Before then, however, we have to create some low-level enemies for Lucius to fight.

Previous versions of RPG Maker came with several dozen premade enemies, but there are only four in the latest version: Bat, Slime, Orc, and Minotaur. These don’t fit the quest I had in mind. So, to start, load the Database Editor (gears icon), and click on the Enemies tab. This displays all possible enemies in your game. Click “Change Maximum” and increase the number to, say, 10. Select 0005, which displays a blank enemy with default stats.

Call this enemy “Giant Rat” and select the Rat picture from the default list of images. You can change the image hue, in case you want a red rat, for example, but we’ll leave that alone for right now. Increase Attack and Defense to 20, and Agility and Luck to 30. M. Attack and M. Defense refer to the creature’s ability to attack with and defend against magic, but these rats have no magical abilities. Finally, under Rewards, change the EXP and Gold to 10. EXP is the amount of experience your hero gains from defeating an enemy.

END_OF_DOCUMENT_TOKEN_TO_BE_REPLACED

In Part III of our exploration of RPG Maker MV, we created a town for our game Mists of Tongass, added a few interactive townspeople, and learned how to enter and exit building interiors. Just to recap the game’s plot, our hero, Lucius York, discovered a letter from his grandpa explaining that he had been arrested for owing rent and sent to debtor’s prison. Today we will be designing the interior of that prison and setting up the main quest.

RPG Maker MV comes with several dozen premade locations, but a jail is not one of them. We’ll have to design our own. The weapons shop interior provides an adequate template. Right-click on Forest Town in the map list, then “Load…”, and then select “Weapon Shop.” You’ll notice a new map pops up at the bottom of the list, identical to the Weapon Shop interior you already have. Select it and press the space bar to edit its general settings. Just change the name to “Jail” for now.

In map editing mode, right-clicking on a tile clones whatever is in that tile–convenient for painting over scenery. Click on an empty floor tile and simply paint over everything in the room except for the walls. Now, because a jail usually has sturdy walls, pick the gray stone wall from tileset layer “A”. Every wall has a top view and a side view. The lighter shade is usually the top view. Now we have a plain, depressing-looking jail.

Add jail cells by painting three vertical walls extending down from the back wall. While doing so, it’s important to keep in mind perspective. Walls are two tiles high, so you have to extend the jail cells to give the prisoners enough room to wander. Each cell should also be three tiles in width. Why? Because one tile will remain open for the entrance–that’s where the cell door will go.

END_OF_DOCUMENT_TOKEN_TO_BE_REPLACED

I love Paradox Interactive’s historical strategy games like the Hearts of Iron series, Victoria, and Crusader Kings II. Built on the same game engine, Stellaris is something different–an open-ended space exploration and empire-building strategy game. Unlike Hearts of Iron and Crusader Kings, which are confined to a familiar geographic space and time, Stellaris allows you to explore and interact with a multitude of species in a randomly-generated universe. Its randomness adds to the fun, but its open-endedness, well, gets kind of tedious after a while.

Stellaris starts out strong. The initial game play, in which you can choose one of several default alien species (including humans), or create your own, is full of promise. In fact, creating my own alien species, then plopping them in an uncharted universe, is what I enjoy most about the game. You have so many options to choose from, including Humanoids, Mammalians, Reptilians, Avians, and well, you get the idea. The problem is, other than changing the appearance of your population, ships, and cities, species type doesn’t seem to have any affect on the game. When you start a new game, your species is confined to its home world with a small fleet, a space port, science ship, and construction ship. You begin by researching basic technologies and using your science ship to survey the solar system, hopefully discovering resources on planets and moons, or discovering and researching anomalies (which give bonuses depending on the nature of the discovery).

How you interact with other species is largely determined by your government type and ethics. If your civilization is fanatically pacifist, for example, you can only fight wars to defend yourself or your allies. You can be xenophobic or xenophile. A xenophobic civilization is allowed to purge and displace aliens from planets and enslave them. A xenophile civilization has better relations with other species and benefits from migration. You can set different rights for different species in your empire.