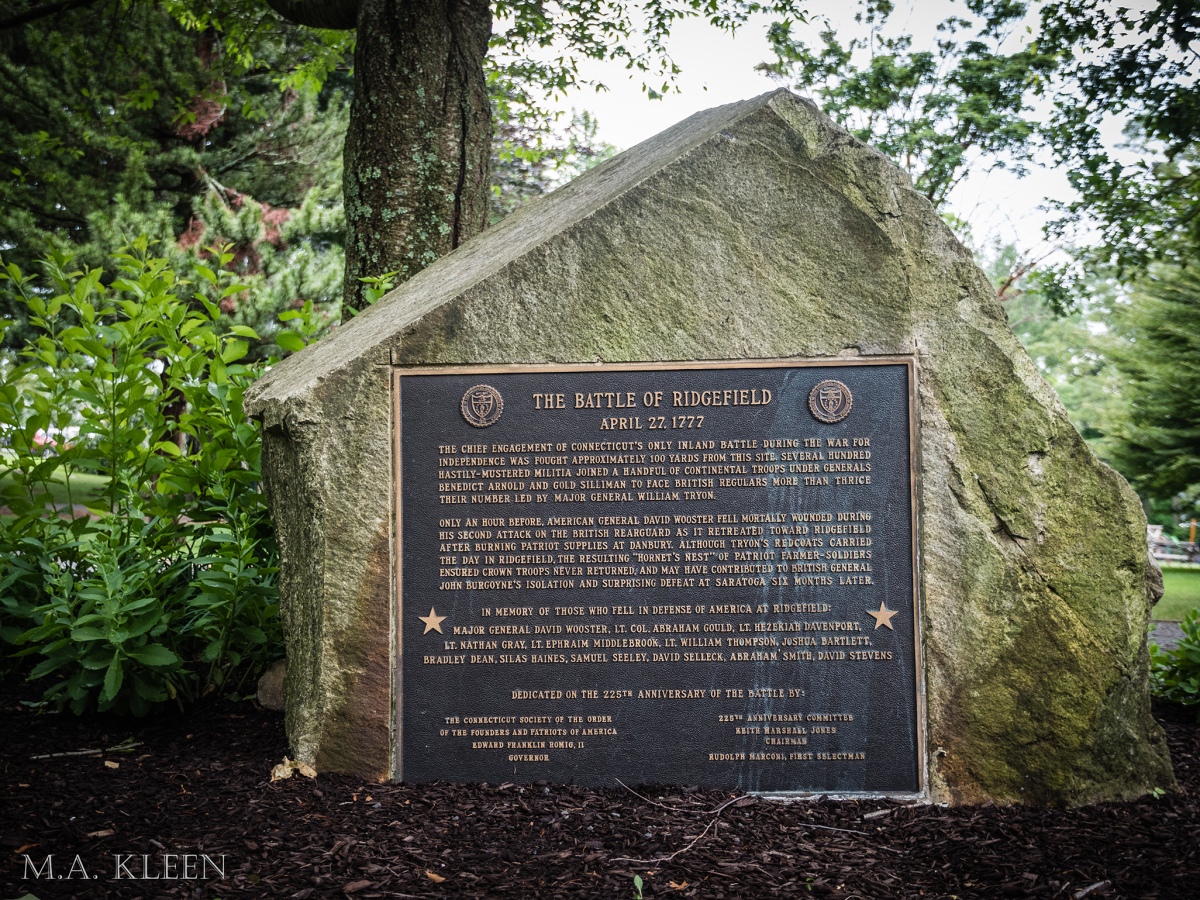 Colonial history is alive in the small Connecticut town of Ridgefield, where visitors can still see a British cannonball embedded in a wooden post in a former local tavern.

The Battle of Ridgefield was fought on April 27, 1777 between American Colonial forces commanded by Maj. Gen. David Wooster and Brig. Gen. Benedict Arnold and British forces commanded by Maj. Gen. William Tryon around Ridgefield, Connecticut during the Revolutionary War. The battle was a tactical success for the British, but their actions galvanized Patriot support in Connecticut. Enrollments in the Continental Army soared, and the British limited their operations in Connecticut to coastal raiding.

In spring, 1777, New York Royal Governor Maj. Gen. William Tryon landed on the Connecticut coastline with 1,500 regulars and 300 loyalist militia with the objective of destroying a military supply depot in Danbury, Connecticut. It took too long for colonial militia to muster to save the depot, and on the morning of April 27, the British torched Patriot homes in Danbury and moved south toward Ridgefield.

Brig. Gen. Benedict Arnold, with approximately 500 men, erected barricades throughout Ridgefield, while Maj. Gen. David Wooster pursued the British with 200 men. Wooster harassed their rear guard, but at one point the British put up a stiff defense bolstered with cannon. Wooster reportedly called out, “Come on my boys! Never mind such random shots!” moments before being mortally wounded.

The British overwhelmed colonial defensive positions in Ridgefield and it became a running gun battle through the streets. At one point, Benedict Arnold’s horse was shot out from under him. A British soldier called for his surrender, but Arnold shouted, “Not Yet” and shot him dead. The battle was over by early afternoon. The colonists lost approximately 20 killed and 60-80 wounded to the British 26 killed, 117 wounded, and 29 missing (reportedly captured).

Fought between Great Britain and her Thirteen American Colonies from 1775 to 1883, the Revolutionary War led to a Declaration of Independence and the formation of the United States of America in 1776. The Thirteen Colonies won their independence, at the cost of an estimated 158,000 British, American, French, German, Spanish, and American Indian lives. It was a dynamic and surprisingly international conflict.

Because the Battle of Ridgefield was fought at multiple points, there is no defined battlefield you can visit today. Ridgefield is a bustling town of over 25,000 people, a far cry from the small hamlet of less than 2,000 in 1777. Keeler Tavern, which was there at the time of the battle, still has a British cannonball lodged in a corner post on display. There is a small stone monument in Ballard Park, and a large obelisk honoring Gen. David Wooser at his grave site in Danbury.

Keeler Tavern, at 132 Main Street in Ridgefield, Connecticut, is open Wednesday, Saturday, and Sunday from 1:00 to 4:00 pm. Admission is $8.00 for adults and $5.00 for seniors, children under 18, and Students with ID. Ballard Park is located at 485 Main Street, across from Ridgefield Library. Gen. David Wooser’s monument is in Wooster Cemetery, Wooster Street Cemetery in Danbury, Connecticut.