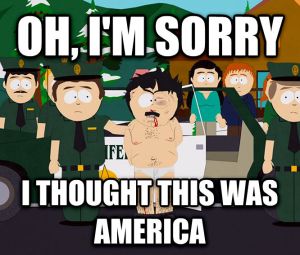 You’ve probably heard this disturbing story of Juli Briskman, who was fired after a photo of her giving President Trump’s motorcade the middle finger went viral. Her employer, a government contractor called Akima, LLC, justified terminating her employment on the grounds that she violated their “social media policy” by using the photo as her profile picture on Twitter and Facebook.

“Basically, you cannot have ‘lewd’ or ‘obscene’ things in your social media. So they were calling flipping him off ‘obscene,’” Briskman said. What a cheap excuse!

While it’s true Akima is a government contractor, and Briskman was clearly making a political statement, she did it on her own time, and posted the photo on her personal social media accounts. If this isn’t considered a direct attack on her freedom of expression, I don’t know what is.

In June, I argued that it was wrong for National Park Service employees to express their displeasure with the Trump administration because they were doing so on official government accounts.

It is inappropriate for Federal employees to engage in politics while at work, using government equipment, and in their official capacities, but I have no problem with them doing so on their own time, on their own social media accounts.

Likewise, if Briskman had been driving in a company vehicle, and the photo clearly showed Akima branding, I could see where they might have a case for reprimanding her, since it makes the company look bad. But not only was she riding her bicycle on her own time, you can’t even identify her in the photo.

There ought to be a separation between a person’s employment and his or her private life, and you shouldn’t have to fear reprisals at work for political opinions you express in your free time. Apparently Virginia is a state where an employer can fire an employee anytime, for any reason, but I still think this is ridiculous enough to open them up to a lawsuit.