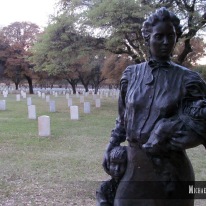 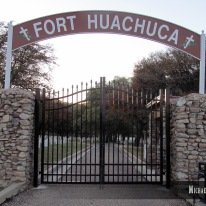 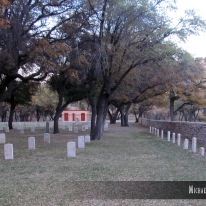 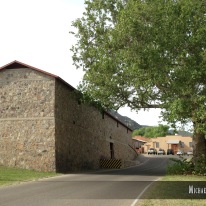 Fort Huachuca, located at the base of the Huachuca Mountains near Sierra Vista in southwest Arizona, has a storied history as a military outpost. Captain Samuel M. Whitside, at the command of two companies of the 6th Cavalry Regiment, created Camp Huachuca in March 1877 during the US campaign to suppress the Apache Indians. Since then, Fort Huachuca has played a valuable role in serving the US military.

Because of its history, the fort is also allegedly home to several haunted places. The Carleton House is the most famous, but “Hangman’s Warehouse” and the old Fort Huachuca Cemetery have their own macabre tales to tell. Even the Equal Employment Opportunity Office, which was originally the post’s jail, is believed to be haunted.

Fort Huachuca became a permanent military installation in 1882, to aid the fight against Bedonkohe Apache leader Geronimo. Geronimo, famous for his exploits against both Mexican and American authorities, surrendered on September 4, 1886 in Skeleton Canyon, Arizona. From 1913 to 1933, the fort was home to the 10th Cavalry Regiment.

The 10th Cavalry Regiment was an African American unit that served with distinction in the Western Indian Wars, Spanish-American War, and Philippine Insurrection. They were known as “Buffalo Soldiers,” a name given to them by Cheyenne warriors, who thought their curly hair resembled a buffalo’s. Today, Fort Huachuca is home to the US Army Military Intelligence Corps and is a training center for military intelligence disciplines and unmanned aerial system operations.

The Carleton House (also known as Quarters Number 9), located at 2133 Cushing Street, was constructed in 1880 to serve as the post’s hospital. It served many roles since then, with the most recent being an officer’s residence. It is widely believed to be haunted by the ghost of “Charlotte,” a young woman who died shortly after having a stillborn baby while the building was a hospital.

Joan Strom, wife of Colonel Roy Strom, deputy commander of the U.S. Army Intelligence Center from 1980-1982, named the ghost after reportedly having several encounters. “Charlotte” is believed to inhabit one corner of the living room in particular, which is always colder than the rest of the room. A rocking chair placed in that corner appeared to move on its own. While living in the house, the Stroms experienced electrical disturbances, moving wall fixtures, and other strange activity.

Located on Old Post at the corner of Clarkson Street and Shipp Avenue, Hangman’s Warehouse is a rectangular stone building that is mainly remembered for the execution of two murderers in the 1940s. In 1942, Private James Rowe stabbed a fellow soldier to death in a dispute over stolen cigarettes.

One year later, Staff Sergeant Jerry Sykes murdered a woman with whom he had been having an affair. Both were hanged for their crimes beneath the side windows of the warehouse, within sight of the post’s jail. A sign commemorates the hangings to this day. Visitors report seeing faces in the windows, smelling cigar smoke, and hearing agonizing cries.

The old jail is currently home to the Equal Employment Opportunity Office, which is also reportedly haunted. Employees have encountered radios and microwaves that turn on by themselves, and have heard the distinct sound of cowboy boots and spurs walking down the hallway.

In 2011, EEO Director and AEP Program Manager Beth Ford told the Sierra Vista Herald, “You could tell someone was walking, the footsteps were that clear. We all thought it was our co-worker’s son coming to visit his mother, but he wasn’t in the building — nobody else was wearing cowboy boots.”

Located at the end of Burt Road, behind Old Post, the Fort Huachuca Cemetery is also known for its ghostly activity. It is a sacred place where many visitors come to pay their respects to men and women who served their country. The cemetery is well maintained, and graves of historic significance are marked with small plaques. Indian scouts, their wives, and children are also buried here.

Its first burial was Private F.P. Kelly of the 6th US Cavalry Regiment, who died on December 22, 1877. 76 unknown dead, who were disinterred from the old cemetery at Camp San Carlos to make way for the Coolidge Dam, were re-interred in Fort Huachuca Cemetery in 1928. It is no wonder visitors have reported encountering chills, ghostly lights, and other apparitions.

Besides these buildings, there are many other things to see, including scenic hiking trails and two museums. As an active US Army base, Fort Huachuca is open to the public, but visitors must show their driver’s license, proof of insurance, and car registration before entering.