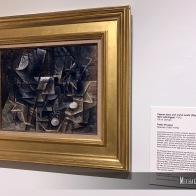 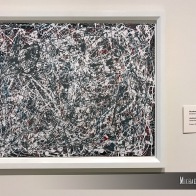 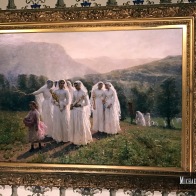 Located at 310 Genesee Street in Utica, New York, the Munson-Williams-Proctor Arts Institute is an enjoyable art museum with several notable pieces, including a Jackson Pollock, Salvador Dalí, and Picasso. It also has a fine collection of 19th-Century American painting and sculpture, as well as an annex showcasing the 19th-Century home of James and Helen Williams, “Fountain Elms”. I’m not a fan of modern art, but it was nice to see some pieces by prominent artists at a smaller art museum. Similar institutions would charge visitors to see such “high profile” pieces, but the M.W.P. Arts Institute only takes donations to see its general collection.

A special exhibition of Steve McCurry’s photographs will be on display until December 31st. Steve McCurry is best known for his haunting photograph of a young Afghan Girl with piercing green eyes taken in Peshawar, Pakistan in 1984.

The World through His Lens: Steve McCurry Photographs is an exhibition of more than 60 large-scale photographs by National Geographic photographer Steve McCurry. It costs $10 general admission, or $5 for students, and is free to children under 12.

According to their website, “McCurry’s evocative images reveal collective human struggles and explore diverse societies across the boundaries of language and culture. Organized around universal themes of personal adornment, place, and ritual, exhibition will include unforgettable images from across six continents and spanning ancient traditions, international conflict, and vanishing cultures.”

This a unique opportunity to see his photographs up close, as the M.W.P. Arts Institute is the only venue for this exhibition.

The art museum’s permanent collection consists of more than 15,000 objects, began in the late 19th-Century by the Williams and Proctor families, who collected American and European paintings and decorative arts. I personally enjoyed the museum’s collection of 19th-Century art. Many of these paintings were created by the Hudson River School, a group of Romantic landscape painters based in New York City who painted views of the Hudson River Valley and surrounding areas. This includes Thomas Cole’s four-painting series, “The Voyage of Life.” The museum’s website has examples.

As a lover of old books and libraries, I was excited about an exhibition related to “reading and writing in the visual arts.” The volunteer at the front desk promised it would be “enchanting,” however, it turned out to be a series of photographs of modern libraries, and a collection of book and writing-related objects. There were a few hidden gems, most notably a page from a medieval manuscript.

I was most impressed with “Fountain Elms.” The Victorian-era Italianate mansion is nearly perfectly preserved with furniture and decorations, and of course, beautiful pieces of art. The wallpaper is incredibly colorful and intricately designed. One of my favorite paintings in the mansion, by Jules A. Breton, 1888, hangs over the staircase and is titled Young Women Going to a Procession. It depicts a line of ladies dressed in white holding golden stalks and white and pink flowers. There are other images of simple, country life, evoking a fascination with the pastoral.

The terrace cafe near the entrance to Fountain Elms was closed during my visit, but it looks like a relaxing place to have a cup of coffee.