In the 1994 satirical comedy PCU, mobs of angry students run down and protest anyone who offends their cause célèbre at the fictional Port Chester University. Way ahead of its time, the film starring Jeremy Piven and David Spade lampooned the burgeoning movement of “political correctness” on college campuses. Today, we might call these PC warriors “Social Justice Warriors”, or SJWs.

While it’s funny to watch angry mobs of college students chase a hapless pre-frosh through campus in a movie, it’s not so hilarious for the real victims of campus activism. Oberlin College in Oberlin, Ohio recently learned this lesson the hard way after a jury awarded $44 million to  Gibson’s Food Market and Bakery after students and faculty wrongly targeted them for a protest campaign.

In 2016, the store owner’s son, Allyn Gibson, confronted a student he believed was trying to purchase one bottle of wine with a fake ID and steal two bottles stuffed under his shirt. The student ran from the store and Gibson chased after him. Outside, the report alleged, several more students joined the confrontation and physically assaulted Gibson before fleeing the scene. Three students eventually plead guilty to misdemeanors of aggravated trespassing and attempted theft.

END_OF_DOCUMENT_TOKEN_TO_BE_REPLACED

In the latest Bizarro-World controversy, political partisans have taken to the internet to fight over – cauliflower? Yes, really. This bland and ubiquitous vegetable has become the latest front in the Culture Wars, with freshman Congresswoman Alexandria Ocasio-Cortez (AOC) even claiming ‘people of color’ have a hard time gardening because cauliflower is a colonialist vegetable.

Many people love cauliflower because it’s high in fiber and vitamins and low in calories. I dislike it for the same reason I dislike vanilla ice cream and plain waffles–I need flavor in my life! But because AOC has become clickbait and her name buries every other search result, I haven’t been able to determine where these anti-cauliflower sentiments come from. Is it actually something argued by fringe identitarians, or did AOC just make it up to grab headlines?

In the dumbest video she’s uploaded since pretending to not know what a garbage disposal is, she said:

“But when you really think about it — when someone says that it’s ‘too hard’ to do a green space that grows Yucca instead of, I don’t know, cauliflower or something — what you’re doing is you’re taking a colonial approach to environmentalism. That is why a lot of communities of color get resistant to certain environmentalist movements because they come with the colonial lens on them.”

Essentially, she’s arguing that South and Central Americans living in the Bronx have been brainwashed into growing European foods, rather than something native to hot, dry regions like the Yucca plant. It doesn’t take a genius to figure out why it’s easier to grow cauliflower in New York than a desert plant like Yucca. Yucca thrives in a completely different climate.

END_OF_DOCUMENT_TOKEN_TO_BE_REPLACED

An emotional tribute to young cadets who fought and died in the American Civil War.

Written by Thomas Farrell and David M. Kennedy and directed by Sean McNamara, Field of Lost Shoes (2014) tells the story of cadets from the Virginia Military Institute who fought at the Battle of New Market during the American Civil War. Despite an obviously low budget and inexperienced cast, the film is charming and emotionally engaging; one of the better Civil War films to be released in recent years.

Robert (Nolan Gould) is a freshman cadet, or “Rat”, who falls in with a tight group of upperclassmen, including John Wise (Luke Benward), an ex-governor’s son, and Moses Ezekiel (Josh Zuckerman), an aspiring sculptor and the first Jewish cadet at VMI. The war forms a backdrop to schoolboy antics like hazing, stealing food from the Institute’s enslaved cook, Old Judge (Keith David), and pursuing a romantic interest with the local girls, including Libby Clinedinst (Mary Mouser).

Breckinridge badly needs reinforcements, and he reluctantly sends for the VMI cadets, who his battle-hardened veterans regard as nothing more than children playing soldier. Will the cadets get there in time, and more importantly, will they prove their worth on the battlefield?

END_OF_DOCUMENT_TOKEN_TO_BE_REPLACED 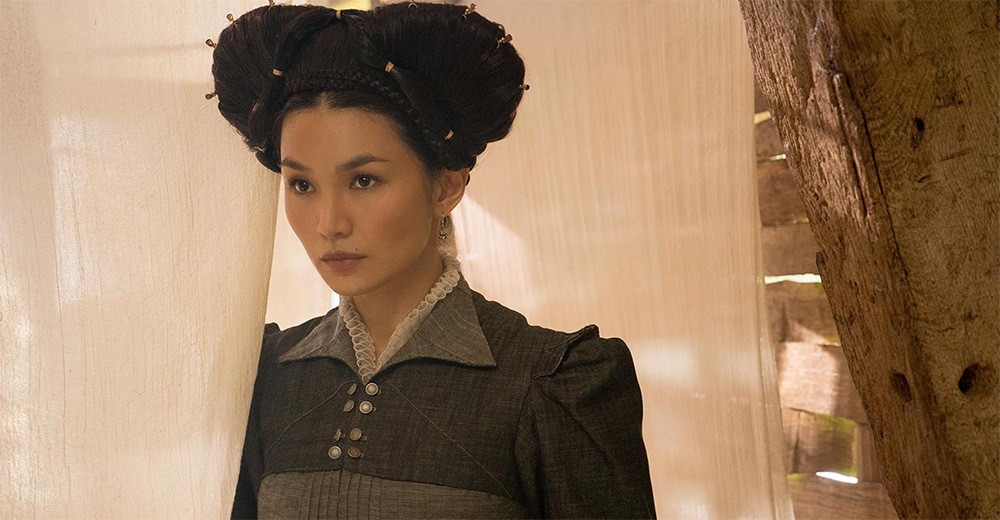 Back in January, I wrote an article criticizing director Josie Rourke’s “colorblind casting” choice in her historical film Mary Queen of Scots. Mary Queen of Scots recounts the sixteenth century struggle between Mary I of Scotland and Queen Elizabeth I over the throne of England. The film is largely historically accurate, depending on the source.

However, several black actors and one actress of Chinese decent appear in prominent roles, particularly Mary Seton (Izuka Hoyle), Lord Randolph (Adrian Lester), Bess of Hardwick (Gemma Chan), Andrew Ker of Fawdonside (Nathan East), and the English Ambassador to Scotland, George Dalgleish (Adrian Derrick-Palmer). Being either English or Scottish in the 1500s, of course, all of these people were pasty white.

Defenders of this peculiar casting choice have strained logic past the point of credulity, and once again, writers like Allure’s Jessica Chia have fallen back on that tired cliche “Internet trolls” to dismiss criticism of Gemma Chan’s role as Bess of Hardwick in Mary Queen of Scots.

“Why are actors of color, who have fewer opportunities anyway, only allowed to play their own race?” Chan asked. “In the past, the role would be given to a white actor who would tape up their eyes and do the role in yellowface. John Wayne played Genghis Khan. If John Wayne can play Genghis Khan, I can play Bess of Hardwick.”

END_OF_DOCUMENT_TOKEN_TO_BE_REPLACED

An African-American police detective in 1970s Colorado Springs fights for acceptance at work while infiltrating the local branch of the Ku Klux Klan with help from his Jewish partner. Will he win the affection of a Colorado College activist and foil the KKK’s violent schemes? Starring John David Washington, Adam Driver, and Laura Harrier, BlacKkKlansman (2018) was written and directed by Spike Lee, et al. While entertaining, it jettisons historical accuracy to score contemporary political points.

BlacKkKlansman was inspired by the book Black Klansman (2014) by Ron Stallworth. Stallworth was a police officer and detective in the Colorado Springs Police Department who in 1979 responded to an ad in the newspaper looking to start a local branch of the Knights of the Ku Klux Klan. With the help of a white officer posing as Stallworth at meetings, he successfully infiltrated the Klan for nine months. The Colorado Springs PD shut down the investigation after Stallworth was asked to lead the chapter, fearing word would get out that the police department had Klan affiliations.

Aside from a few incidents, like Stallworth speaking to David Duke (Grand Wizard of the KKKK) and having his picture taken with him, that’s where the comparison parts ways. It turns out “based on a true story” is really “inspired by true events.” The writers took many creative liberties to forward a cinematic narrative and spoon feed the audience an overtly political message.

Attacks on the film’s accuracy have come from many corners. Sorry to Bother You (2018) director Boots Riley criticized Spike Lee for allegedly ..er.. whitewashing Ron Stallworth, turning him into a hero and downplaying his infiltration of black student organizations. “It’s a made up story in which the false parts of it try to make a cop the protagonist in the fight against racial oppression,” he argued.

END_OF_DOCUMENT_TOKEN_TO_BE_REPLACED

I finally went back to the theater (instant sticker shock, btw) to see the one movie I’ve been looking forward to for the past several months, BlacKkKlansman. Spike Lee is always an interesting if not controversial filmmaker, and the story of a black detective infiltrating the KKK promised to be entertaining if nothing else. The fact it was based on a true story sealed the deal. Unfortunately, it just wasn’t as good as I hoped it would be. Here are some of my initial thoughts, with a full review to follow next week.

That’s all for now. My review is mainly going to focus on the historical accuracy of the film and divining its message. Look for it on Monday!

An ex-Confederate organizes a rebellion in southeastern Mississippi during the American Civil War and continues to battle for equal rights for freedmen during Reconstruction in Free State of Jones (2016), written and directed by Gary Ross. The film alternates between the 1860s and a 1948 miscegenation trial, to the detriment of both. Free State of Jones bombed at the box office and received mixed reviews from critics.

The film begins at the Battle of Corinth in northeastern Mississippi, October 3-4, 1862, in which Confederate forces under Maj. Gen. Earl Van Dorn attempted to dislodge Union forces commanded by Maj. Gen. William Rosecrans from fortifications around the town of Corinth. Newton Knight (Matthew McConaughey) is a medical orderly in the Confederate army from Jones County, a predominantly poor area with few slaves.

Knight is disgruntled to learn of a Confederate law that allows sons of plantation owners to avoid military service depending on the number of slaves his family owns. This was designed to guard against slave uprisings, but it angered some poor whites who believed they were fighting a “rich man’s war”. When Knight returns the body of his nephew Daniel (Jacob Lofland) to his home county, he learns that Confederate Captain Elias Hood (Thomas Francis Murphy) is excessively confiscating goods from the local population.

Things get complicated when Knight meets and falls in love with a slave, Rachel (Gugu Mbatha-Raw), despite being married to Serena (Keri Russell). He fights back against the tax collectors and hides out in the swamp, where he meets fugitive slaves and befriends Moses (Mahershala Ali). Together with other deserters, they successfully rebel against the Confederacy and proclaim a Free State of Jones. After the war, freed slaves struggle against a segregationist South.

END_OF_DOCUMENT_TOKEN_TO_BE_REPLACED

A disgruntled middle manager’s insurance scheme unravels in an idyllic 1950s suburb in Suburbicon (2017). Gardner Lodge (Matt Damon) is a middle-aged man with a disabled wife, Rose (Julianne Moore), and a young son, Nicky (Noah Jupe). Their world is shattered when two thugs (Glenn Fleshler and Michael D. Cohen) seemingly break into their home and murder Rose with an overdose of chloroform.

In the wake of the tragedy, Rose’s sister, Margaret (also played by Julianne Moore), moves in with Gardner and Nicky, over the objections of her brother, Mitch (Gary Basaraba). Meanwhile, an African American family, Mr. and Mrs. Mayers (Leith M. Burke and Karimah Westbrook) and their son Andy (Tony Espinosa), move into the all-white community. This ignites a controversy that forms the backdrop for the film.

Suburbicon was written by the Coen brothers and directed by George Clooney (who revised the screenplay). Joel and Ethan Coen originally wrote the script in 1986. Their effort at finding whatever was laying around for their next film paid off by finishing 9th at the box office on its opening weekend. Suburbicon is Matt Damon’s lowest performing film and it has a current rating of 26 percent on Rotten Tomatoes.

Suburbicon is modeled after Levittown, New York, a planned community built by William Levitt between 1947 and 1951 and the nation’s first modern suburb. Levitt, who was Jewish, believed whites would not want to live in Levittown alongside black neighbors, so the original rental agreement excluded non-Caucasians. Levittown remains 88.9 percent white.

In Suburbicon, white mobs subject the Mayers family to 24-hour harassment, culminating in torching their car and hanging a Confederate battle flag in their broken window. Nicky and Andy, however, form a bond, suggesting a more tolerant future.