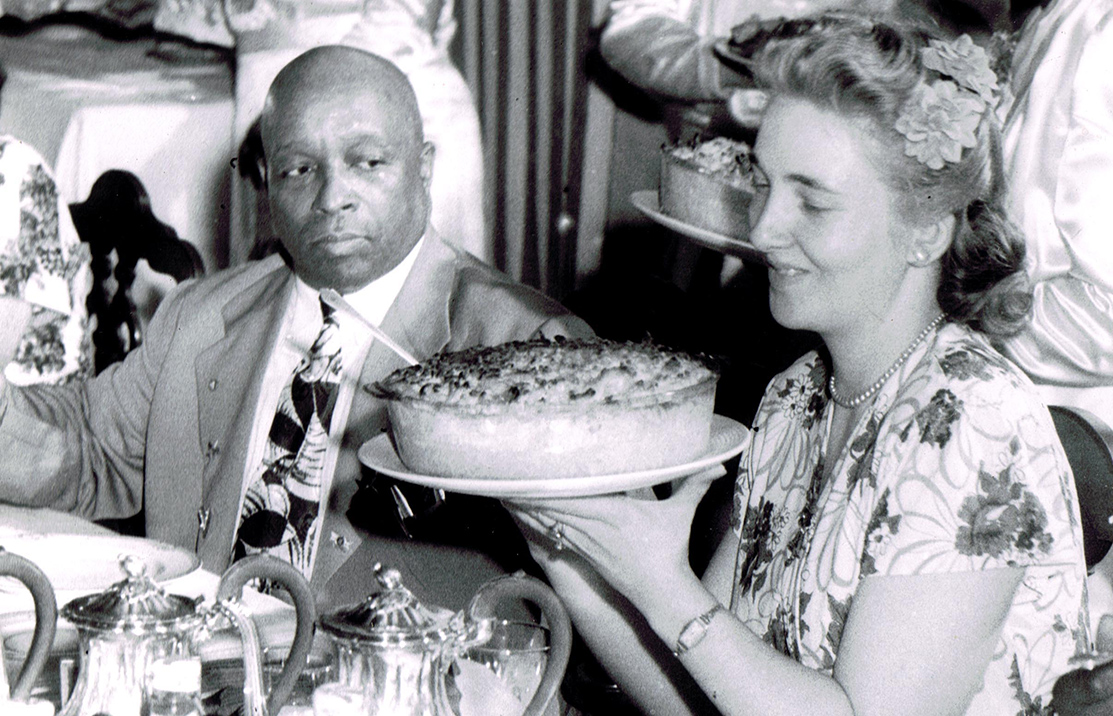 During the Great Depression, “Father Divine” urged his followers to transcend race and poverty through the power of positive thinking and a shared banquet table.

In American culture, ideals of health and prosperity have long been intertwined with food. At the dawn of the twentieth century, it was the ability to eat what one wanted and when that defined an American family’s assent into the growing middle class. It was no accident that during the 1930s a man appeared offering salvation through the act of eating.

George Baker, Jr., or “Father Divine”, professed himself to be God incarnate. He urged his followers to transcend race and poverty through the power of positive thinking. His message successfully crossed racial barriers because he appealed to cultural traditions common to all Americans, traditions like conspicuous consumption, Charismatic Christianity, and the Protestant work ethic.

As historian Jill Watts eloquently put it, he “provided a theology that promised a better life and a brighter future to anyone, regardless of economic status. Father Divine personified the Horatio Alger myth, and his success proved that even for blacks, America was a land of opportunity.”[1] Food, a symbol of prosperity, was the unifying commodity he used to actualize that myth.

The ready availability of food, dolled out by his hands, literally demonstrated that he could give his followers a piece of the American pie. He consciously used the act of sharing food between peoples―a long tradition in American history―to realize his dream of racial harmony. “I have a-plenty to eat, to drink and to wear, and I have plenty of automobiles to ride in; comfort and convenience for you and ME!” was a common boast, and promise, from Father Divine.[2]

In Divine’s mind, race was nonexistent and only served to divide humanity. He refused to be recognized as anything other than God and ordered his followers to break ties with their previous identities. These commandments were often issued at the Holy Communion banquets, which were central to his theology. In order to realize the old American adage of e pluribus unum, “out of many―one,” he enforced a seating pattern that required black and white to sit at alternating intervals.

“Father Divine’s own religious vision indicated that his dining rooms were a microcosm of the utopian vision articulated in the Gospels at the great eschatological banquet,” Jualynne Dodson and Cheryl Gilkes explained. “The actions in the meals were signs of the actions of a better world to be actualized through his movement.”[3]

The banquets served as a beacon that attracted the poor and destitute to his congregation and demonstrated that he alone held the answer to the country’s ills. His uncanny ability to bring forth prosperity for himself and for his followers set him apart from other self-proclaimed messiahs in the early half of the twentieth century. His secret was simple: rather than simply talking about helping the poor and ending racial animosity, he made steps to do both. “With the exception of Divine’s inconsistent relationship with unions,” historian Robert Weisbrot explained, “he led or cooperated in virtually every major campaign for racial equality during the depression.”[4]

To achieve integration, he sent white emissaries into upscale neighborhoods to purchase houses and hotels, to be followed by African Americans who would otherwise have had no access to those areas. In 1935 he organized interracial, rural cooperatives in New York, which furnished his restaurants and dinner tables with food. Weisbrot maintained that, “it is indicative of Divine’s organizing talent that his rural experiment, perhaps the most productive ever devised primarily for disadvantaged ghetto residents, was merely a sidelight among many other ‘utopian’ programs that Divine successfully nurtured during this period.”[5]

Divine’s agricultural experiments, integrated housing, and lavish banquets were all part of an effort to make his followers understand that God would not only provide for them in the afterlife, but also in the here and now. He was the conduit through which prosperity passed. “Divine noted that simply the thought that God was literally handing their food helped believers develop purer, more wholesome bodies and souls,” R. Marie Griffith explained.[6]

As the food literally replenished their bodies, the power of God replenished their souls. As Father Divine himself made clear, “this material food we are eating is the actual tangibilization of GOD’S Word, of GOD’S Love and of GOD’S Presence; they have been made bread and meat for you to personally eat.”[7]

Father Divine promised his followers that they would be entirely reborn and rejuvenated through the act of eating at his table. His food was purported to possess the power to heal the sick, and many who dined with him claimed to have undergone physical and spiritual transformations. Father Divine certainly did not discourage those notions. “This is GOD’S Holy Banquet Table,” he asserted. “Wheresoever I AM functioning and serving the food… I AM serving the Holy Communion for the nourishment of your bodies and for the benefit of your souls; to supply you with Something that will give you victory over sickness and diseases and afflictions, over trials and tribulations.”[8]

As the ceremony of the Eucharist is central to mainstream Christianity, and therefore familiar to most Americans, Father Divine’s message was well understood and easily transferable into the mundane act of eating. While a priest or reverend merely gave his or her flock a small token of God’s flesh and blood in the form of bread and wine, Father Divine offered his followers a bounty of seemingly endless variety. “He dismissed the pie-in-the-sky salvation plans of orthodox Christians and dualistic mind-curists alike,” Griffith explained, “offering in their place concrete, pleasurable experience here and now.”[9]

Such a doctrine was undeniably seductive to many who suffered during the Great Depression. “I did not come to save the SOUL,” Divine preached, “but I came to save the BODIES of the children of men.”[10] For the many who lacked food and shelter during that time of crisis, their God in human form continually delivered on his promises. In return, they did as he asked and abandoned the vices of the world, which, for many of them, included racial prejudice.

The success of Father Divine’s Peace Mission movement, although also attributable to charisma, organization, and the economics of the Great Depression, was primarily the result of his skillful use of American traditions, traditions that appealed to a broad range of people regardless of race, class, or gender. He took familiar conceptions of religion, work ethic, and the centrality of food and compiled them to form an attractive social doctrine familiar enough to the mainstream to attract tens of thousands of followers throughout his life, despite his eccentric pronouncements of divinity.

Yet, as so often happens in history, the movement failed to outlive the man. Although scattered outposts remained through the 1960s, the theater of civil rights shifted from the North to the South, and new leaders were thrust into the limelight. However, Father Divine’s Holy Communion banquets stand as an interesting historical solution to racial prejudice in America. As the pilgrims shared food with the Wampanoags, and John Smith broke bread with the Powhatans, Father Divine urged black and white to abandon their differences at the dinner table and embrace the bounty of America as one.

[3] Jualynne Dodson and Cheryl Gilkes, “’There’s Nothing Like Church Food’: Food and the U.S. Afro-Christian Tradition: Re-Membering Community and Feeding the Embodied S/spirit(s),” Journal of the American Academy of Religion 63 (Autumn 1995): 535.