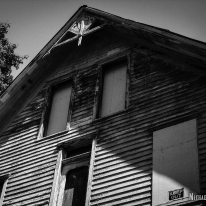 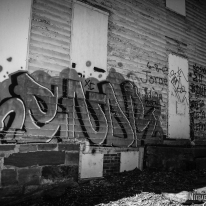 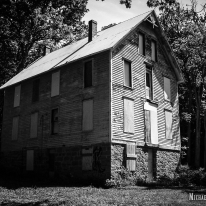 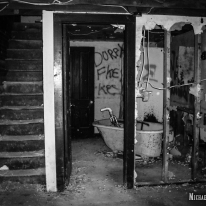 A few miles west of Macomb, Illinois, deep in the woods outside the small village of Colchester, sits the remnants of Vishnu Springs. Since its final abandonment in 1982, this ghost town has attracted curious college students who have heard stories of the crumbling old hotel and weed-choked natural springs.

Headlines like “Vishnu Springs: Is the old place haunted?” and “Western’s Haunted Secret” entice students to risk fines for trespassing down the long, dark trail into the woods to catch a glimpse of the graffiti-sprayed clapboard facade of the old Capitol Hotel. A once-thriving resort community, Vishnu Springs has captured the imagination of visitors as much in its afterlife as it did in its heyday.

What remains of its three-story hotel, once majestic and full of energy, has become a haven for students from Western Illinois University looking for a thrill. Some of these unwanted visitors have returned with stories of harrowing encounters with the unknown (as well as with law enforcement, who routinely patrol the grounds).

According to author Troy Taylor, Vishnu Springs is home to a number of restless ghosts. It is rumored that Maud, wife of Vishnu founder Darius Hicks, died in childbirth in one of the rooms of the Capital Hotel, an event that left an “impression” behind. In Haunted Illinois (2004) Taylor claimed, “Visitors also told of sounds from Vishnu’s past, echoing into the present.” These sounds are remnants of an earlier, happier time dating back to the founding days of Vishnu Springs. 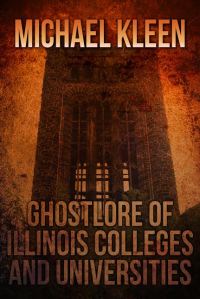 It began with a simple discovery. In the 1860s and ‘70s, a farmer named Ebenezer Hicks began to notice the unusual taste and mineral quality of an artesian well flowing in a valley on his land north of the town of Colchester in rural McDonough County.

Attracted to the natural spring’s healing properties, a Doctor named J.W. Aiken attempted to sell the water as a cure-all to local coal miners, but made a negligible profit. After the landowner passed away, his son, an entrepreneur named Darius Hicks, inherited the land and built a hotel he called the Capital Hotel, which opened in 1890. The hotel had 20 guest rooms, a dining room, parlor, and dance hall.

Others soon arrived to live and work there, but the isolated nature of the resort impeded its growth. Darius named the place “Vishnu Springs” after the Hindu god Vishnu, who is said to support and sustain the universe. At its height, the resort contained a few dozen houses, a carousel, a pond, sports fields, and even a small race track. During the early 1900s, several deadly incidents and scandals tarnished the community, and when Darius Hicks committed suicide in 1908, no one remained who was willing to invest their energy in the resort.

During the 1970s, a group of free-spirited students from Western Illinois University rented the old Capitol Hotel and attempted to turn Vishnu Springs into a commune. They held music festivals and carved out a small sustainable farm on the property. At an open house held by the Friends of Vishnu in 2009, WIU alumni Tom Fortuna reminisced about living there.

Fortuna, an English graduate student at the time, lived there with five other students from 1976 to 1977. “It had its wild phase before I got here,” he told the McDonough County Voice. He recalled being snowed in during the winter, and pointed out his room and study on the second floor—now ransacked and covered with graffiti.

Today, all that remains of Vishnu Springs is the Capital Hotel. Since the late 1890s, visitors, including a former state senator, have written their names into its wooden walls. While the site has become a perennial subject for the Western Courier, preservationists have so far prevented the hotel from being demolished. Donations have been raised, and not even threats of arrest and fines have abated the public interest in this fascinating place.

Olga Kay Kennedy, a Western Illinois University alumnus, inherited Vishnu Springs from her grandparents and gifted it to the university in 2003. According to her wishes, all 140 acres have been turned into a nature preserve known as the Ira and Reatha T. Post Wildlife Sanctuary.