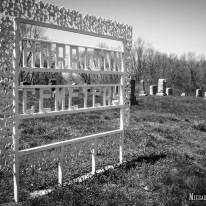 Located between the town of Christopher and the village of Buckner in rural Franklin County, Illinois, Harrison Cemetery is home to two luminous phantoms, as well as haunting, ethereal tones. If you can get past the glowing ghosts of a man and a woman who are said to guard the cemetery, you will discover a small monument in the form of a piano. Although locked in stone, this unique headstone is said to be the source of the ghostly music.

Harrison Cemetery has served area residents for over 120 years and is named after one of the first families to settle Browning Township. The History of Gallatin, Saline, Hamilton, Franklin and Williamson Counties listed A. [Andrew] U. Harrison among the township’s early settlers, most of whom arrived in the same year Illinois became a state: 1818.

Both Andrew Harrison and his wife Elizabeth are interred in the cemetery. They died in 1845 and 1846, respectively, but Harrison Cemetery was not officially chartered until 1907.

The village of Buckner grew up along the Illinois Central rail during the 1910s and flourished due to its proximity to a large United Coal Mining Company plant that churned out 4,000 tons of coal per day.43 Workers at the plant and from the nearby mines converged on Buckner after their shifts.

The village developed a reputation for its nightlife, and even today it is home to the only club in southern Illinois to stay open until 4am.

Many of the men who for decades pulled coal out of the earth were, at the end of their lives, returned to the earth alongside their families on the sloping hills of Harrison Cemetery. But some locals say that the souls of at least two of those people refuse to rest.

According to an entry on the Shadowlands Index of Haunted Places for Illinois, the ghosts of both a man and a woman guard the graveyard. “The man usually shows up as an orange glow in a field beside the cemetery,” the index reads. “The woman is usually a whitish glow. She usually shows up near a group of pine trees in a far corner of the cemetery.”

This corner of the cemetery is also the home of a third legend, that of a piano that plays at midnight. This legend is clearly tied to an unusual looking headstone set apart from the others. With its oversized piano keys, it appears to memorialize a child, perhaps one with an interest in music, but there is no name or date to give any clues as to who it belonged.

In a now-deleted interview on examiner.com, members of the Southern Illinois Ghost Hunters Society said, “it literally felt like an elephant was sitting on our chests and we were all getting very dizzy, and while all that was going on when we were standing still we could hear something running next to us and nothing was there.”

Whether you believe the stories or not, Harrison Cemetery certainly has an interesting place in the history and folklore of Franklin County.