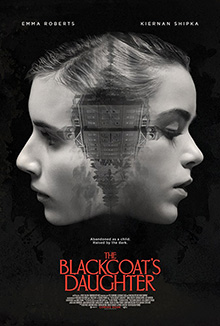 A young girl’s isolation at a Catholic boarding school in Upstate New York leads to increasingly disturbing behavior, while a psych-ward escapee drifts closer, in the nail-biting supernatural thriller, The Blackcoat’s Daughter (2015). Originally titled February, writer/director Oz Perkins intended this film to be a meditation on loneliness. He crafted a creepy and disturbing tale that has all the elements of a good horror movie.

The film is essentially divided into two stories that progressively come together in a surprise ending. In the first, a freshman girl named Kat (Kiernan Shipka) is staying at her Catholic boarding school over winter break because her parents have failed to pick her up. Rose (Lucy Boynton), a senior, told her parents the wrong date to buy time so she could find out whether she was pregnant. They are watched by two nuns. Rose receives several phone calls from a mysterious voice she calls “Dad,” and her behavior becomes more disturbing with each phone call.

In the second story, a man named Bill (James Remar) picks up a young hitchhiker named Joan (Emma Roberts) over the objections of his wife, Linda (Lauren Holly). It’s implied Joan escaped from a hospital, but Bill believes she reminds him of his daughter, Rose, who was brutally murdered several years earlier. Bill and Linda are traveling to their daughter’s former school to lay flowers. Bill tries to emotionally connect with Joan, believing God brought them together. Joan replies that she doesn’t believe in God.

**Spoilers** At the school, Kat brutally murders Rose and the nuns, decapitates them, and offers them up to Satan in a macabre ritual in the boiler room. A police officer confronts her and fires a shot. Later, in the hospital, a priest exorcises the demon from Kat, and she sees a shadowy figure disappear. In the present, Joan (now revealed to be a grown-up Kat) kills both Bill and Holly, steals their car, and completes her journey back to the boiler room, only to find it unlit and silent.

Like No Country for Old Men (2007), The Blackcoat’s Daughter uses stark realism and little dialogue to set the tone. Not much is spoken during the 93 minute run time, and even in the climax, Kat remains eerily silent. As the police office points a gun at her and repeatedly yells to drop the knife, she quietly replies, “Hail Satan.” Unlike No Country for Old Men, music plays a prominent role in The Blackcoat’s Daughter. The score itself scratches at your reptilian brain like something from the underworld.

Kiernan Shipka, mostly known for playing Don Draper’s daughter, Sally, in Mad Men (2007-2015), adds a subtle charm to her role. Her character in The Blackcoat’s Daughter doesn’t display much emotion, and has few lines, so poise and control is where her talent shines through, especially when called upon to flash a mischievous smile. Unfortunately, she hasn’t appeared in much else recently, although she’s set to play the titular role in a reboot of Sabrina the Teenage Witch.

The Blackcoat’s Daughter suffers from the ‘Christianity is Catholic‘ trope. At least since The Exorcist (1973), horror films have associated the Catholic Church with mystery, superstition, and demonology. Even though many Protestant denominations believe in Satan and demonic possession, if the Devil appears in a movie, you know the Catholic Church will be involved. It’s not terribly distracting in this film because the director uses it so subtly, but it’s my one complaint.

As a horror film, The Blackcoat’s Daughter does everything right. A good horror movie goes beyond simplistic scares, and The Blackcoat’s Daughter uses a typical horror theme to explore the larger themes of loneliness and emotional isolation. It concludes like a dark symphony. At the end, you feel the loss Kat has for her deceased parents, the life she could have had, and the horrible crimes she committed. Now she has to deal with the consequences of her actions alone, and she finally breaks down and cries.