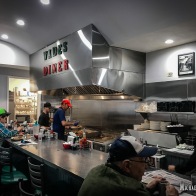 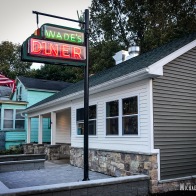 The original Wade’s, an old Pullman car and service station on 9th Street near Route 104 (Bridge Street), was a historic diner that opened in 1937. Unfortunately, an electric fire in August 2015 destroyed the original structure. It was rebuilt in a more modern style to comply with zoning regulations and “support modern technologies.” That technology apparently doesn’t include a credit card reader.

When Neal Wade purchased the Pullman car in the 1930s, he was told he couldn’t haul it across town without a permit. Being enterprising young Americans, Wade and friends decided to expedite the process themselves and hauled it to 9th Street during the night. Since no one could prove how the train car got there, they got away scot-free. In 1983, Anthony Zappala and Joseph Clark purchased the diner. Clark passed away in 2003 and Zappala’s family runs it to this day.

Wade’s is only open for breakfast and brunch, so they have a stripped-down menu offering French toast, pancakes, omelettes, and an assortment of side items, eggs Benedict, frittata, and a breakfast patty melt. They are known for their homemade cinnamon raisin bread. You can purchase a loaf for $6.00 (they also make white, wheat, and rye).

Everyone seems to praise Wade’s breakfast, especially their omelets. It pains me to say that wasn’t my experience. The raisin roast was excellent, but my omelet was under cooked and runny. It came out as quickly as it went in. Maybe I was just there on an off-day.

Wade’s has a 4.4/5 average out of 90 Google reviews and 4.5/5 average on Yelp. Reviews are almost universally positive. Google-user Sidney Kaine shouted typical praise when he wrote, “Omelets and homemade cinnamon raisin toast are the best I have ever eaten. Service is excellent. No complaints except sometimes you have to wait in line to get a table. The bar in front of grill sometimes has open stools. Great place!”

“No exaggeration, hands down the best home fries I have ever eaten! Service was friendly, and the prices are unbeatable!” Google-user Clint DeVoe echoed. “Their cinnamon raisin toast is yummy but their omelets are the best I’ve ever had,” said Yelp-user Judy U. from Branchville, New Jersey.

Negative reviews focus on occasional unfriendly service, limited hours, and lack of a credit card reader, rarely on food quality, but a couple patrons commented that the food had gone down hill since a cook named John left.