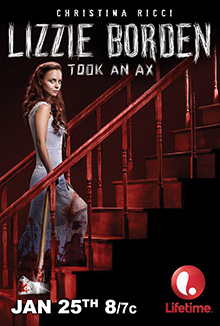 Christina Ricci stars in this made-for-TV dramatization of the 1893 trial of Lizzie Andrew Borden for the murder of her father and step-mother in Fall River, Massachusetts. The highly-stylized production recounts events immediately surrounding the murders and subsequent trial. Lizzie Borden Took an Ax (2014) was later developed into a TV Mini-Series The Lizzie Borden Chronicles (2015). It blends a modern soundtrack with historic events to create an oddly entertaining take on the controversial case.

At 11:10 a.m. on August 4, 1892, Lizzy Borden (Christina Ricci), 32, yelled for the family maid, Bridget Sullivan (Hannah Anderson), to quickly come downstairs. She discovered her father, Andrew (Stephen McHattie), slumped over the sofa. His head had been bashed in. Abby (Sara Botsford), Lizzy’s stepmother, was found on the floor of an upstairs bedroom, her head and face smashed. Lizzy gave police strange and often conflicting information, and she quickly became the chief suspect.

Her New Bedford trial, beginning in June 1893, was a national sensation, widely reported in the newspapers. It took the jury 90 minutes to acquit her, and with her inheritance, she purchased a new home and lived there with her sister Emma (Clea DuVall). Despite efforts to start a new life, Lizzy Borden was ostracized from Fall River society, since many people believed she was the murderer.

There are several alternative theories about “who done it,” but Lizzie Borden Took an Ax doesn’t entertain any of them. It openly implies Lizzie was the murderer, even going so far as to imagine Lizzie confessing the crime to her sister, causing her to flee their home in disgust. In fact, the two sisters split in an argument over a party in 1905, 12 years after the trial. We’ll never know what the sisters said to each other in private conversation, so this is creative license at work.

The film weirdly sexualizes Lizzie Borden, and for that, Christina Ricci was perfect for the role, but Ricci looks nothing like a proper, White Anglo-Saxon Protestant spinster. The real Lizzie Borden was a member of the Women’s Christian Temperance Union, which advocated abstinence from alcohol. Rumors about Lizzie’s sexuality revolved around an alleged relationship with the actress Nance O’Neil, but this gossip was probably of the kind leveled at any unmarried, middle-aged person at the time. Lizzie is portrayed as attempting to seduce everyone who gets in her way, even her own father, and is shown committing the murders in the nude.

Lizzie Borden Took an Ax is well-paced. This 87-minute movie doesn’t waste time dwelling on irrelevant information or side stories. It effectively shows the tension in the Borden household prior to the murders and moves on. The audience doesn’t need to see flashbacks of Lizzie’s childhood, labored exposition, or other staples of historic biopics. The filmmakers establish their backgrounds with a few lines and a few short scenes.

Veteran character actor Gregg Henry was given the unenviable role of playing prosecutor Hosea Knowlton, who is portrayed in this film as the antagonist. Lizzie Borden gives him every reason to suspect she’s the killer, yet Knowlton’s insistence on prosecuting her comes off as a witch-hunt, as few believe her capable of a brutal double murder. He is a forceful presence on screen, but his edge is dulled by the knowledge he’ll ultimately lose the case. Filmmakers tried to cast the verdict as a surprise, but it’s hard to do that when your source material is a real trial.

There are many ways to make a compelling film about the Borden murders–the drama practically writes itself. Lizzie Borden Took an Ax chose not to focus on alternative theories, public interest in the case (it was the first trial followed nationally in the American press), or social issues, but to glamorize Lizzie herself. Christina Ricci fans love this movie, and it’s a capable and entertaining introduction to the case, just don’t reference it in a history paper.

[…] Lizzie, Lifetime’s biopic Lizzie Borden Took an Ax (2014) also weirdly sexualizes her. Both films depict her as a seductress and show her committing […]

I have always been intrigued by Lizzie. Thanks for the article