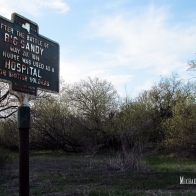 Lake Ontario was strategically vital during the War of 1812. Over water, the British could easily send men and supplies from their Canadian colony into the other Great Lakes or use waterways to strike inland. Likewise, the Americans could use the lake as a route to attack Canada. Sackets Harbor in Upstate New York was an important naval yard and key to American control of Lake Ontario and the St. Lawrence River.

The quickest way to transport vital ship-building supplies from the Brooklyn Naval Yards on Long Island to Sackets Harbor was by river to Albany, from Albany to the Mohawk River, to Wood Creek and Oneida Lake, and finally the Oswego River to Lake Ontario. British destruction of Fort Ontario at the mouth of the Oswego River complicated things, however. The supplies had to be transported at night past patrolling British ships in Lake Ontario.

On the night of May 28, 1814, Major Daniel Appling and Lieutenant Melancthon Taylor Woolsey were transporting supplies north to Sacketts Harbor in 19 boats, along with 150 riflemen. A contingent of 120 Oneida braves accompanied the shipment along the shoreline. A boat somehow floated off course and was captured by the British.

Secrecy lost, when they reached the mouth of South Sandy Creek (as it’s called today) on May 29, they navigated their boats inland and sent scouts to watch for British ships. Sure enough, 180 British sailors and marines were approaching in seven gunboats and cutters.

The British landed on both sides of the river, but the Americans and Oneida braves were waiting for them in an ambush. The fight was over quickly. When the smoke cleared, approximately 10 British soldiers were killed, 52 wounded, and the rest captured. Only one Oneida Indian and a U.S. rifleman were wounded.

To avoid further encounters, the Americans transported the supplies 20 miles overland in oxcarts to Sackets Harbor. A 10,000-pound, 6-inch thick and 600 feet long cable bound for the frigate Superior was too heavy for a cart, so it was hand-carried by 84 to 100 men, swapping out as they got tired. This became known as the “Great Cable Carry.”

Today, much of the Big Sandy Creek battlefield lies within the Eastern Lake Ontario Marshes Bird Conservation Area, off Route 3, just east of a bridge over Big Sandy Creek. There is a parking lot, fishing pier, and interpretive sign at the location. A stone memorial to the battle sits on the west side of the bridge in a private residence’s front yard. A small roadside sign marking the location of a house used to treat wounded British prisoners is a few hundred yards north on Route 3.