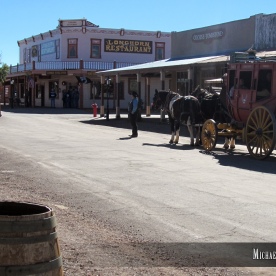 This legendary Wild West town offers a glimpse of the past—sometimes unintentionally!

I first visited Tombstone in 2009, which was a dream come true for this fan of old Westerns. Even though I was born in 1981, I was raised on TV shows like Rawhide and Bonanza. I never had the opportunity to travel out west until after graduate school. When I did, some friends from Phoenix and I made sure to explore everything the town had to offer. One of the most famous buildings in Tombstone is the Bird Cage Theatre.

I never thought I would return, but I recently found myself back in that oddly-named showcase of the Wild West. As I sat down for dinner at Big Nose Kate’s, two cowboys sat at the table next to mine playing cards. Yeah, that felt right. I could feel the living, breathing history there. As it turns out, many of Tombstone’s buildings are said to be haunted, not just the Birdcage. Big Nose Kate’s Saloon is one of these.

Big Nose Kate’s, located at 417 East Allen Street (you can’t miss it), was named after John Henry “Doc” Holliday’s companion, “Big Nose” Kate (Mary Katharine Horony). The saloon sits on the site of the former Grand Hotel, which burned in a fire in the spring of 1881. Sylvester Comstock, owner of the hotel, erected a more modest building in its place.

Patrons and staff have reported hearing the sound of boots thundering against the floor, beer mugs and other objects moving on their own, and even catching a glimpse of an ethereal cowboy. Joshua Hawley, author of Tombstone’s Most Haunted, witnessed one of these moving objects himself when a trophy slid off a mini fridge–narrowly missing one of the employees!

The O.K. Corral, scene of the famous gunfight between the Earp brothers, Doc Holiday, and the Clantons and McLaurys, is an obvious pick for possibly disturbed spirits. Strange encounters have been reported both around the building and in the public park next door. Many of these, however surprisingly, have nothing to do with the gunfight that bears its name. They stem from another shooting that occurred on Allen Street in front of the building. In 1897, a man named William Greene gunned down Justice of the Peace Jim Burnett in cold blood.

The killing stemmed from an incident in which one of Greene’s daughters (and her friend) drowned after someone blew up a dam on Greene’s property. Greene received a tip that the dam was blown on orders from his neighbor, Jim Burnett, and sought revenge. To this day, passersby report seeing a balding, old man with a peppered beard near the O.K. Corral. He usually appears momentarily or vanishes upon approach.

The Crystal Palace Saloon at the corner of Fifth and Allen streets is a great place to grab a drink or a bite to eat, but you also might encounter something unseen. The Crystal Palace occupies the same space as the former Golden Eagle Brewing Company, which burnt down in the fire of 1882. The Crystal Palace Saloon was quickly erected in its place, and featured fine furnishings, including a fountain and goldfish pond. In 1915 the building was converted into a movie theater called the Crystal Theater. In the 1960s, however, an effort was made to restore it to its former glory.

Since then, patrons have reported a number of strange encounters. On one occasion, a man snapped a picture of a band playing at the Crystal Palace. When he developed the photo, there appeared to be a dark figure standing among the musicians. Others have been startled by faucets turning on and off and toilets flushing by themselves in the restroom.

An old man dressed in 1880s attire appears there, but never comes out. According to Joshua Hawley, the “white and wispy” image of an elderly woman once appeared in a picture a bartender snapped of the north end of the bar. When a patron named Kari asked the bartender to take a picture of her because she felt “uneasy,” three dark figures appeared behind her in the photo.

Having been to both Deadwood and Tombstone, I can say with confidence that the citizens of Tombstone have done a much better job of preserving its old “Western” feel. With actors and enthusiasts wandering the street dressed in late 19th Century attire, it is easy to imagine you have stepped back in time. The ghosts too seem to be getting in on the act, inviting you to reach out and touch the past.