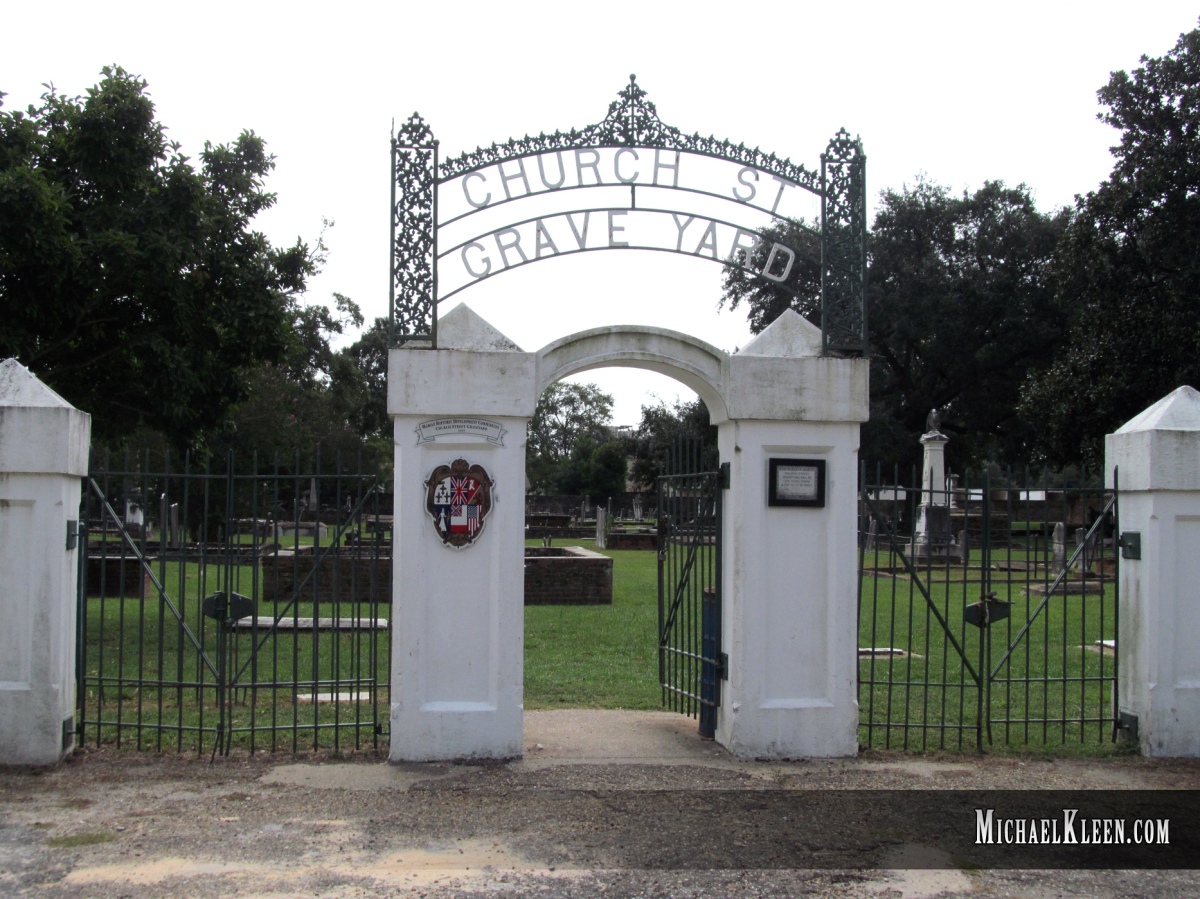 Local residents believe one of Alabama’s oldest cemeteries is haunted by the ghost of a hanged man, whose grave is marked by an oak tree.

Behind a stone wall dating to the 1830s, vines crawl up wrought and cast iron fences, and antebellum granite headstones and crypts stand silently in the shade of southern live oak trees. Wind whistles through this quiet graveyard nestled in historic downtown Mobile, Alabama. Church Street Graveyard, as it is known, is a small 4-acre cemetery that rests behind the Mobile Public Library, with an entrance off Bayou and Church streets. It was established in 1819 and closed in 1898, although a few burials have taken place since then. Many of the earliest people interred there were victims of a yellow fever epidemic that killed hundreds.

The stories at this graveyard primarily center on a southern live oak growing just outside the stone wall off Bayou Street. Southern live oak trees, with thick trunks, gnarled branches, and often decorated with Spanish moss, can live up to 500 years. The Boyington Oak, as this particular tree is known, is relatively young. According to legend, it sprouted in 1835, a year after the gruesome murder that would give it its name.

Charles R.S. Boyington was a vagabond, printer, and gambler who came to Mobile from Connecticut in 1833. On May 11, 1834, he was spotted walking toward Church Street Graveyard with a friend named Nathaniel Frost, who either owed him money or had recently come into money. Later that day, Frost was found robbed and stabbed to death outside the cemetery. Authorities arrested Boyington for the crime as he attempted to flee Mobile and he was quickly convicted. On February 20, 1835, he was hanged by the neck until dead and buried in the northwestern corner of Church Street Graveyard.

Boyington’s story does not end there. According to legend, before he walked to the gallows he vowed that “a mighty oak tree would spring from his heart” to prove his innocence. And so it did. Shortly after his body was interred in the pauper’s section of the cemetery, a southern live oak began to grow over his grave. The cemetery fence was later moved back, putting the tree outside the cemetery.

Since that time, a number of strange things have been encountered near this tree and around Church Street Graveyard generally. Passersby have reported hearing sighs, sobbing, and even the voice of Charles Boyington himself proclaiming his innocence. Others have described unexplained chills on hot summer days.

It is not unusual for ghost stories to crop up around the scene of a murder, but for the murder to have occurred near the place where the murderer was laid to rest is unique. The Boyington Oak stands as a reminder of this interesting tale. Visitors familiar with the story cannot help but stand in the shade of this tree and wonder whether its roots really wrap around the crumbling bones of Charles Boyington. Was something of his essence absorbed in its gnarled branches? Perhaps, on windy days, you can hear the answer whispering through its shivering leaves.