WTVO and WQRF-TV are slowly bringing journalism back to Rockford after the purge at the Rock River Times left local news bereft of inquisitive journalists. What about the daily newspaper? Let’s face it, the Register Star hasn’t been a real newspaper in years. After I was alerted to a series of donations made by Gorman and Company to Rockford Mayor Larry Morrissey prior to their entering a deal over the city-owned Amerock /Ziock building, I leaked this information to the local press. WTVO/WQRF were the only station to pick up the story. Read the article below. Watch the video at this link.

What I find most incredible about this story, is that Alderman Tom McNamara (D-3rd Ward), basically admitted on live television that Rockford’s politicians are bought and paid for by companies that do business with the city. He says it so casually, he either did not realize or did not care what he was saying. This admission further confirms suspicions of community activists that “pay to play” is standard operating procedure in the City of Rockford.

From the housing projects at South New Towne Drive, to the future hotel in the old Amerock building downtown, Wisconsin-based developer Gorman & Company is tied to both City of Rockford projects. The company is also tied to Rockford Mayor Larry Morrissey, having donated thousands of dollars to his campaign, much of it after his last election.

“Gorman & Co.’s donation to Citizens for Morrissey, prior to making a business deal with the City, reeks of pay to play. It gives the appearance of a conflict of interest and raises questions about how the City of Rockford does business. City contracts should be awarded through a transparent, open bidding process, not backroom deals. Awarding political donors with favored status is not how an open, transparent government operates.”

“On the surface, it appears very bad,” said Terry Siebert, Director of Together Rockford. He spent weeks collecting thousands of signatures against the public housing proposal Gorman was set to develop in his neighborhood, and he says he’s well aware of the Wisconsin company’s contributions to the mayor.

Here’s a screenshot of the donations. Note that Mayor Morrissey is the only Illinois politician Gorman has contributed to. 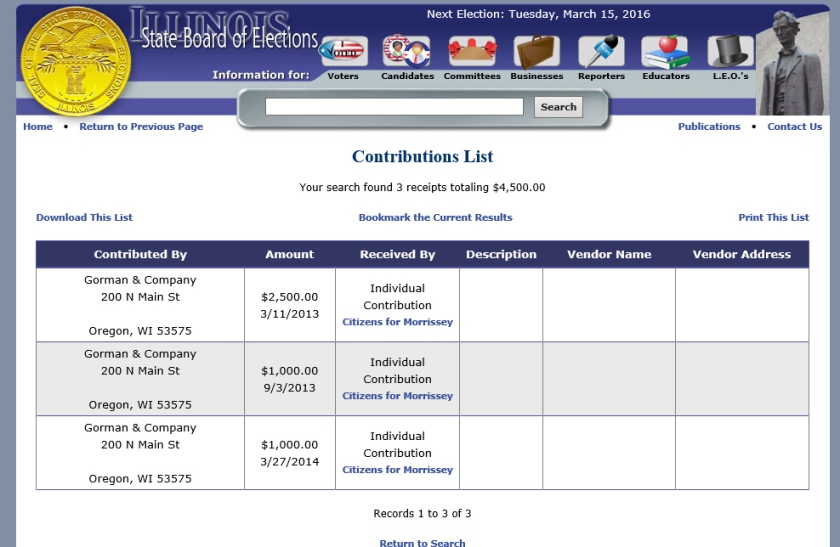