Natural history and a taste of the fantastic awaits you at this subterranean roadside attraction.

Adults and children alike will enjoy this 1/2-mile loop through towering stalagmites and stalactites 235 feet underground. Walk through a continuous room over 1,000 feet long and 120 feet high, slowly hollowed out over millions of years, draining into the nearby Greenbrier River. Stairs, ramps, and railings make the basic tour a breeze for anyone not in a wheel chair.

Lost World Caverns was discovered in 1942, though local farmers had been using its entrance to dump dead livestock and trash for decades. They had no idea what lay just under the surface until scientists from  Virginia Tech began to explore what was then known as “Grapevine Cave”. It was surveyed in the 1960s, and in 1967 the remains of a prehistoric cave bear were discovered.

In the 1970s, the cavern was developed for commercial tourism and in 1973 the National Park Service designated it a National Natural Landmark. Since then, Lost World Caverns has attracted the sensational. In 1971, a man named Bob Addis set the World Record for “Stalagmite Sitting” atop a 28-foot formation called the War Club, and in 1992 the infamous tabloid Weekly World News reported that “Bat Boy” had been caught living in the cave.

END_OF_DOCUMENT_TOKEN_TO_BE_REPLACED

Traverse a historic Cypress swamp once home to Native Americans, European colonists, and even pirates!

On April 26, 1607, Captain Christopher Newport and his three ships of English colonists made landfall at Cape Henry before moving on to establish the Jamestown Settlement. Their landing site is located in nearby Fort Story, which borders the park. It was for that reason in 1997 the Virginia Department of Conservation and Recreation changed its name from Seashore State Park to First Landing State Park.

A swamp seems like an unusual addition to the National Register of Historic Places, but for hundreds of years, European explorers, Native Americans, and pirates navigated this ancient Cypress swamp. Bald Cypress trees are known to live for centuries, meaning visitors might see the exact same trees as early colonists. Its Seashore Natural Area was designated a National Natural Landmark in 1965 and the park was added to the Register in 2005.

According to legend, in 1718 the pirate Edward Teach, better known as “Blackbeard”, buried a treasure in the sand dunes along shore before fleeing inland through the Cypress swamp’s labyrinthine waterways. They sailed south to North Carolina, intending to eventually return to retrieve their treasure. Blackbeard was killed on November 22, 1718, however, and this fabled treasure was never found.

END_OF_DOCUMENT_TOKEN_TO_BE_REPLACED

Prehistoric World in Morrisburg, Ontario is a quaint throwback to roadside attractions of yore. There’s nothing fancy here; it’s just a stroll through the park among painted concrete dinosaurs and prehistoric mammals created by local artists Paul and Serge Dupuis, but it’s simple fun and education for a reasonable price.

The Dupuis brothers have been creating these life-sized sculptures for over 37 years. They depict primitive reptiles of the Paleozoic period to large mammals of the Cenozoic and Quaternary. Each sculpture features a plaque with information about the creature. There are currently over 50 sculptures.

END_OF_DOCUMENT_TOKEN_TO_BE_REPLACED

The Dinosaur Place in Oakdale, Connecticut (southwest of Norwich) is a fun adventure park for kids of all ages. They even have an animatronic Dilophosaurus that spits water at you when you step into its cave! I loved dinosaurs as a kid, and would have been enthralled. When Jurassic Park came out in 1993, I was so excited I refused to change my Jurassic Park t-shirt until we saw it.

The Dinosaur Place grew out of a shop called Nature’s Art, which displayed fossils and gem stones. It was so popular that by 2003 the owners were able to open an expansion featuring life-like depictions of these prehistoric creatures. Families can easily spend an afternoon (and a small fortune) here. In addition to the dinosaurs, there’s also a maze and splashpad for kids.

END_OF_DOCUMENT_TOKEN_TO_BE_REPLACED

It’s hard to describe my feelings in visiting Dinosaur World in Plant City, Florida. When Jurassic Park came out in 1993, it was the summer before I entered junior high. My family and I were visiting friends in Florida, and I was so excited I refused to change my Jurassic Park t-shirt until we saw it. That’s how much I loved dinosaurs. The 12-year-old me would have been in heaven at Dinosaur World. 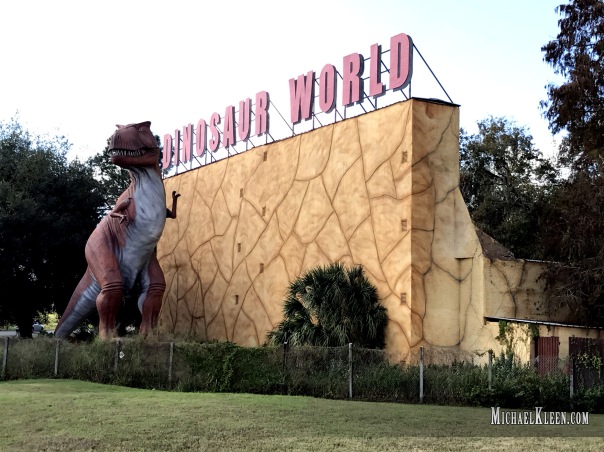 I’m not sure why kids are so fascinated by dinosaurs, but they absorb so much knowledge about the subject it puts adults to shame. Kids can rattle off complex Latin names with ease. I’ve forgotten half of what I used to know about all the different species and popular theories. For a theme park like this to be successful, it’s got to be able to withstand the inquisitive questioning of an eight year old and ignite his or her imagination.

Dinosaur World does all these things. I couldn’t believe how many different dinosaurs and other prehistoric species they had on display. You could spend hours navigating the park. There are over 150 life-size dinosaur sculptures, created by Swedish businessman Christer Svensson. The sculptures are made from polystyrene foam, fiberglass, and putty.

END_OF_DOCUMENT_TOKEN_TO_BE_REPLACED

My first exposure to Red Rock Canyon was in the game Fallout: New Vegas, so when I visited the real Las Vegas, I jumped at the chance to see it firsthand. It’s right outside the city, only a 10-15 minute drive west of the metro area. Thankfully, I didn’t run into any Great Khans or Cazadors. It was the middle of summer though, so it was ridiculously hot.

Red Rock Canyon, Calico Hill, and Keystone Thrust are simply breathtaking. 600 million years ago, the area was under an ocean and sediments gradually hardened into limestone. By 180 million years ago, the area became a desert and was covered by shifting sand dunes. These hardened into sandstone with calcium carbonate and iron oxides, giving the rocks, called Aztec Sandstone, a unique reddish color. They are only found in the Mojave Desert.

Like Custer State Park in South Dakota, wild donkeys, called burros (donkey in Spanish), roam the park, although I never saw one. The Red Rock Canyon Interpretive Association adopted a burro and named him “Jackson.” He sometimes hangs out at the Visitors Center or south of Highway 159 where the Loop Train begins, but you’re not supposed to feed him.