A beautiful sculpture of the Virgin Mary in St. Mary’s Cemetery on James Street, south of Clayton, New York in Jefferson County. The monument commemorates the Lanther family. It also depicts a serpent being crushed under Mary’s foot.

Clayton is a quaint town along the St. Lawrence River with an antique boat museum and a few shops along the river. If you visit, don’t miss 1000 Islands River Rat Cheese farther up James Street, downtown. 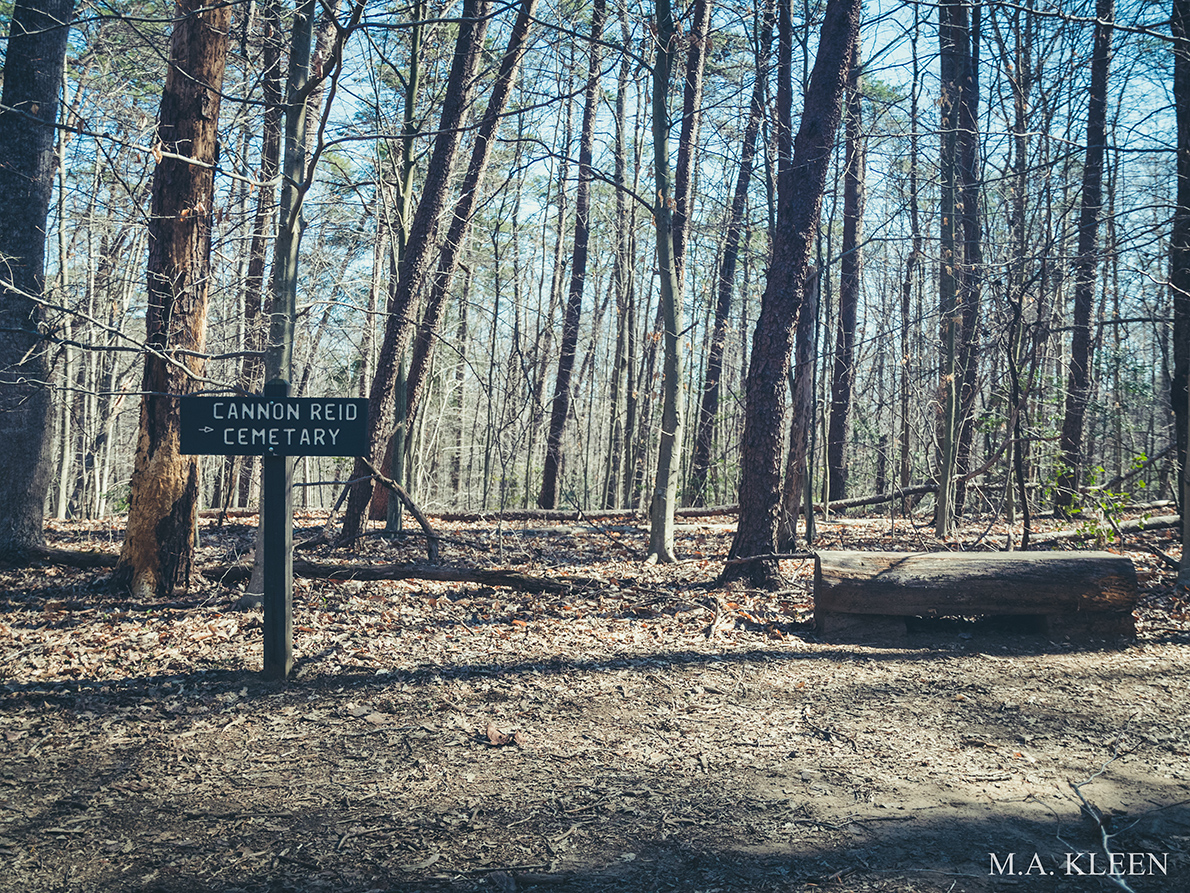 The 16,084 acres of Prince William Forest Park in northern Virginia was once home to at least three small towns, two mines, and dozens of homesteads. During the Great Depression, the Federal Government began buying up this land to form the Chopawamsic Recreational Demonstration Area. It purchased 79 properties and condemned 48 others.

Enforcement of the eviction was half-hearted, however, until WW2 when the Office of Strategic Services wanted to turn the land into a training ground. They forcibly removed dozens of residents without compensation. After the war, the National Park Service took over management and renamed it Prince William Forest Park, charging visitors $15 a week to walk around the woods. What a bunch of dicks.

There are approximately 45 family cemeteries dotting the park, reminders of the people who once lived there. It’s estimated over 300 people are interred there. Less than twelve are marked on the official park map.

Cannon-Reed Cemetery is closest to the Visitor’s Center, off Birch Bluff Trail. A small sign misspelling the family name points to the side trail leading to the graveyard. Revolutionary War veteran Luke Cannon is buried here, as is a young man who lost his life working in the local mine.

END_OF_DOCUMENT_TOKEN_TO_BE_REPLACED 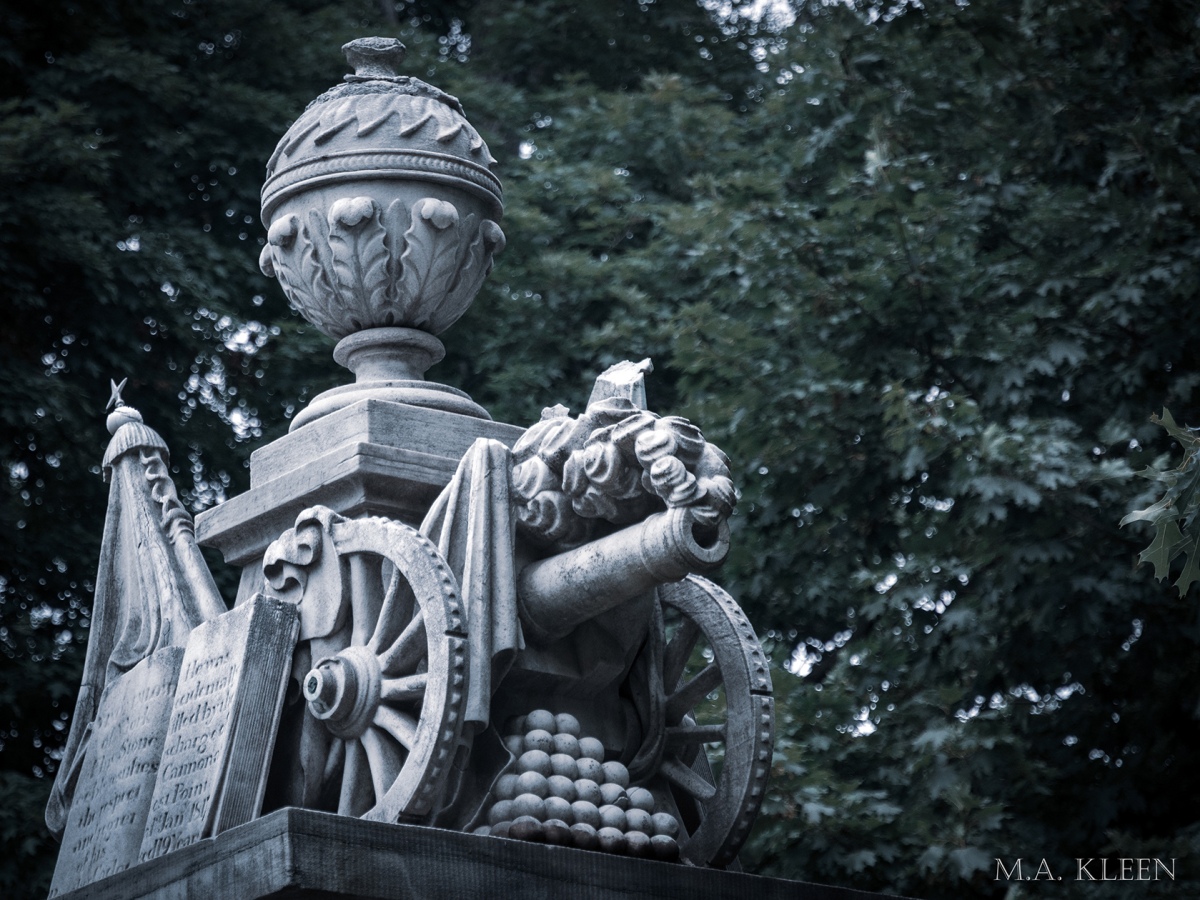 The United States Military Academy cemetery at West Point is filled with storied figures and heroes who fought in all America’s wars. West Point, on the Hudson River in Upstate New York, served as a fort during the Revolutionary War and is the oldest continuously operating Army post in the United States. Captain Thompson, an officer in the Revolutionary War, may have been the first internment at the cemetery here in 1809.

Winfield Scott (1786-1866) is a giant in American military history. He was the longest serving U.S. general, and second to hold the rank of lieutenant general. He led troops in four wars, and conceived the “Anaconda Plan” that ultimately defeated the Confederacy during the American Civil War. He was Commanding General of the United States Army (equivalent to the modern position of Chief of Staff of the Army) for 20 years.

George Armstrong Custer (1839-1876) – his name is synonymous with the American West, and he gained infamy for leading his troops to slaughter against the Plains Indians in the Battle of the Little Bighorn. But before that, he cut a dashing figure as a cavalry officer during the American Civil War, where he rose to the rank of Major General of U.S. Volunteers and fought in numerous battles.

END_OF_DOCUMENT_TOKEN_TO_BE_REPLACED

Headstone for Eunice Denison (unk-1809) in Cherry Hill Cemetery at Main Street and Christian Hill Road, north of the White River and east of Bethel, Windsor County, Vermont. This well-preserved black slate marker has me wondering if it’s a duplicate or has been cleaned recently. At 210 years and counting, this is one of the oldest headstones I’ve seen in Vermont.

The inscription (from Matthew 18:4) reads:

Whosoever shalt humble
himself as a little child
the same is greatest in
the kingdom of heaven.

Monument to Jane L. Redfield (1827-1899) in Oakwood Cemetery, 940 Comstock Avenue, next to Syracuse University, in Syracuse, Onondaga County, New York. Her father, Lewis Hamilton Redfield (1792-1882) was a wealthy printer. Jane had six siblings and was never married (that I can determine). This statue was erected by her sister, Margaret Tredwell Redfield Smith.

Oakwood Cemetery was designed by landscape architect Howard Daniels and opened in 1859. It is a secular Victorian “rural” or “garden” style cemetery where over 60,000 people are interred in 160 wooded acres. 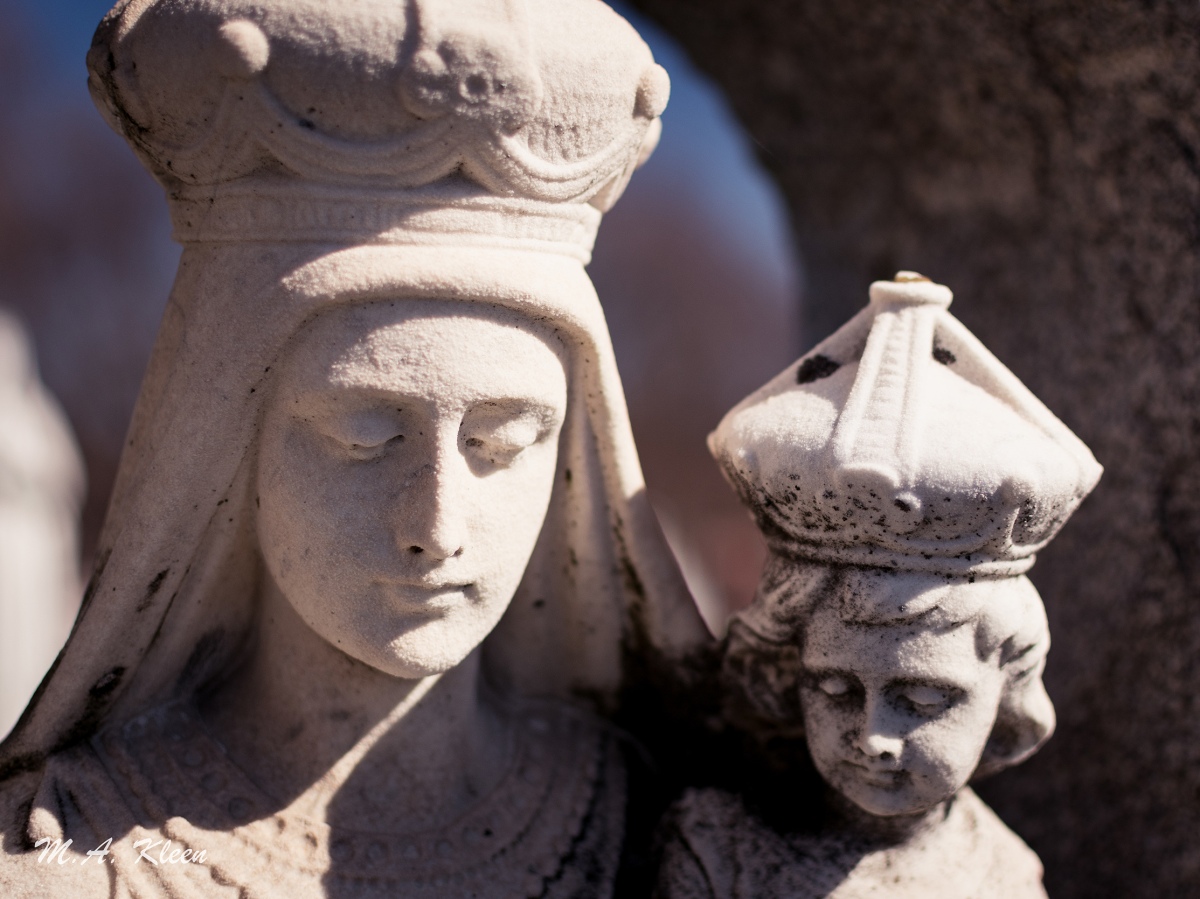 A statue of Holy Mary of “the Chains” (della Catena), who according to legend broke the chains of three wrongly condemned prisoners in Palermo in 1390. The chains were later found in the church of Santa Maria del Porto. This statue is in Assumption Cemetery in Syracuse, Onondaga County, New York. 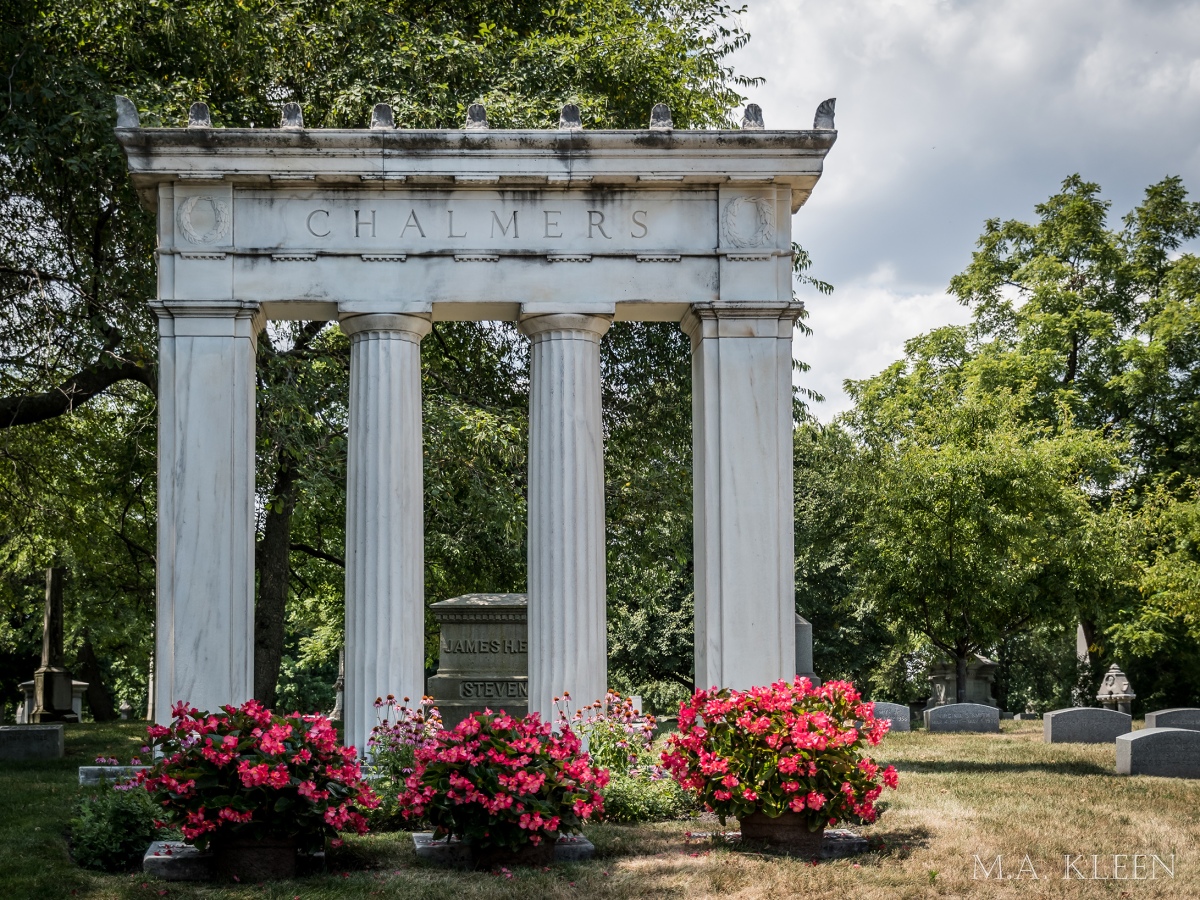 Established in 1860 by Thomas Bryan, Graceland Cemetery, at 4001 N. Clark Street in Chicago, Illinois, is the city’s premier burial ground. Approximately 45,000 people are interred in these 121 acres, including many of Chicago’s most prominent former citizens, including Cyrus McCormick, George Pullman, John Altgeld, and Allan Pinkerton.

This lovely neoclassical bronze monument is dedicated to department store mogul Marshall Field (1834-1906). Field rose from farmer’s son to wealthiest man in Chicago when he got into the merchandising business and eventually established Marshall Field and Company. Marshall Field and John D. Rockefeller founded the University of Chicago in 1890. The statue of a sitting woman holding oak leaves (symbolizing courage), called “Memory”, was designed by architect Henry Bacon and sculptor Daniel Chester French.

This Granite knight, designed by Lorado Taft and called “Crusader”, commemorates Victor Fremont Lawson (1850-1920), Norwegian-American publisher of the Chicago Daily News. Lawson ran the Daily News for 29 years. His monument is unmarked, except for the epitaph: “Above al things truth beareth away the victory.”