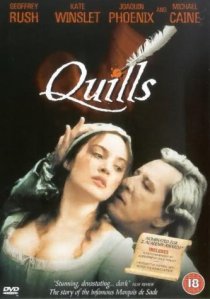 Directed by Philip Kaufman, Quills is based on a play of the same name by Doug Wright. The film opens during the French Revolution. Marquis de Sade (Geoffrey Rush) witnesses the execution of a young aristocratic woman from the window of his prison cell in the Bastille. The executioner is none other than Bouchon, who later appears as the most disturbed patient at Charenton. “One day, Mademoiselle found herself at the mercy of a man every bit as perverse as she, a man whose skill in the art of pain exceeded her own,” de Sade explained to the audience. Later, when his services were no longer needed, the poor wretch was locked up without any kind of treatment (because, as Foucault tells us, madness was not considered to be an ‘illness’ at the time). The implication was that justice in the “Age of Reason” was dolled out by the insane. 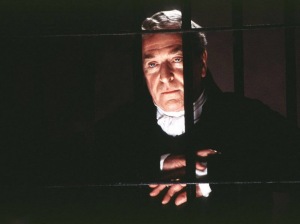 When Napoleon orders de Sade’s execution, an advisor suggests instead that he send Doctor Antoine Royer-Collard, “a staunchly moral man of impeccable character,” to appraise the situation at Charenton and reform its notorious inmate.

“Welcome to our humble madhouse doctor,” de Sade says as Doctor Royer-Collard (Michael Caine) arrives at Charenton. “I’m sure you’ll find yourself at home.” Historically, Royer-Collard arrived in 1806. He did not believe de Sade was insane and petitioned to have him sent to a regular prison. In Quills, the character of the doctor symbolizes several themes in Foucault’s work. He presents himself as a purely rational and moral man. Because human passions were seen as a form of madness, the doctor shows his sanity by being totally dispassionate. He places an iron barrier between himself and those he considers insane.

END_OF_DOCUMENT_TOKEN_TO_BE_REPLACED

Early nineteenth century German philosopher Georg Wilhelm Friedrich Hegel (1770-1831) and his later counterpart, Friedrich Nietzsche (1844-1900), had different views on art and its purpose. Both philosophers believed Classical Greek art was art in its highest form, but disagreed over who it served–man or nature.

According to Hegel, art, along with religion, science, and philosophy, are all expressions of our mind’s need to know itself, or its need to reconstruct the world in its image. He believed this is realized through practical activity, activity that, for art, includes painting, sculpture, etc. It’s through these mediums that absolute spirit (everything real, including the external world and human minds) expresses itself in sensory form. Because it is a power of spirit to externalize all internal things, and internalize external things, art must be an expression of some internal aspect of the artist.

In the broad case of art through the ages, the “artist” is spirit working itself out through history. Hegel believed the internal aspect of spirit is truth; therefore truth must be what is externalized in an artwork. The truth of art is inseparable from its physical form. Hegel also believed the ideal of beauty is perfection of form, which for him expresses the most spiritual truth. Since, for Hegel, art reaches its technical perfection (in other words, in perfect form) in Classical art, Classical art is therefore the most beautiful art form. The goal of art is to unify content and form.

END_OF_DOCUMENT_TOKEN_TO_BE_REPLACED

Walk the same halls as notorious criminals in America’s first true penitentiary. Do the ghosts of long-suffering inmates remain?

Some might consider it ironic that the world’s first true penitentiary was built not only in the Land of the Free, but in the City of Brotherly Love. The Gothic Revival exterior of Eastern State Penitentiary, a prison designed to reform criminals, inspired fear for over a century. Situated in the heart of modern Philadelphia, Pennsylvania, it stood as a reminder of what fate awaited those who ran afoul of the law. It is no surprise that more than a few ghosts are believed to lurk behind its thick stone walls.

Eastern State Penitentiary is located at 2027 Fairmount Avenue, between Corinthian Avenue and North 22nd Street, in the Fairmount neighborhood. Fairmount used to be a farming community outside the City of Philadelphia, but was incorporated into the city in the 19th Century. Eastern State Penitentiary was designed by Architect John Haviland and built in 1829. A man named Charles Williams was its first prisoner. The prison became so famous that it was one of two places Charles Dickens wanted to see when he visited Philadelphia in 1842.

END_OF_DOCUMENT_TOKEN_TO_BE_REPLACED

Welcome to the latest in a series of posts looking at minor countries in the game Hearts of Iron IV by Paradox Entertainment. Hearts of Iron IV is an epic historical simulator that allows you to experience the Second World War as any country, and perhaps, change history. These articles examine the benefits and drawbacks of playing as any of dozens of minor countries in HOI IV. This week I’ll be looking at Yugoslavia.

Historically, Yugoslavia disappeared under the fascist boot heel in 1941. The German puppet state of Croatia, led by the ultranationalist Ustaše, helped fight partisans in the region. At the end of the war, communists under Josip Broz Tito seized power and became an independent socialist state outside the Soviet Union’s influence.

Yugoslavia starts the game in 1936 as a neutral authoritarian regime led by Prince Paul, with the national spirit Anti-German Military, which grants +5% to ideology drift defense. There is also a chance the military might stage a coup if Yugoslavia aligns itself with or gives military access to Germany. It has a volunteer military, civilian economy, and export focused trade law. It is governed by a Regency Council that holds elections every three years, with the next election in May 1938.

Yugoslavia only has 3 research slots, so you want to get the 2 bonus slots through national focuses as quickly as you can. It has researched Infantry Weapons I, Mountain Infantry I, Engineer Company I, Light Tank I, Destroyer I, Light Cruiser I, Submarine I, and Interwar Fighter. You don’t have access to artillery or motorized units in 1936.

END_OF_DOCUMENT_TOKEN_TO_BE_REPLACED

Patriots Day follows fictional Boston police sergeant Tommy Saunders (Mark Wahlberg) as he helps track down brothers Dzhokhar and Tamerlan Tsarnaev, who detonated two bombs at the 2013 Boston Marathon. The tragedy occurred at 2:49 p.m. local time on April 15, 2013. Massachusetts celebrates Patriots’ Day on April 15 to commemorate the anniversary of Lexington and Concord, the first battles of the Revolutionary War. It’s estimated around 500,000 spectators attend the marathon. The bombs, made from pressure cookers, detonated 12 seconds apart, killing three and wounding approximately 264.

The film opens the night before the marathon, establishing a backstory for Sergeant Tommy Saunders. He is a well-meaning cop who got into a fight and has to pull guard duty at the marathon finish line before he can assume his regular duties. From there, we are shown snapshots of characters as they get up and start their day, but it is unclear how most of them will tie into the plot. We see future bombers Dzhokhar and Tamerlan Tsarnaev, his wife and daughter, at their apartment. Their morning is not typical, as one watches a video of masked terrorists demonstrating how to construct a pressure cooker bomb.

The terror, gut-wrenching shock, and confusion of the bombing is dramatically portrayed, as is the following manhunt. We see both law enforcement and the Tsarnaev brothers as they head for a fiery confrontation in the Boston suburb of Watertown. Moments of humor break up the dramatic, heart-racing scenes. During the final shootout with the Tsarnaev brothers, a man tosses a sledgehammer from his porch at police officers crouched behind the fence. “Give ’em hell!” he shouts, as if the crude melee weapon will do anything against the terrorists’ guns and homemade bombs.

It is meant to show defiance and resiliency in the face of terror, and Patriots Day is full of such crowd-pleasing moments, but how accurately does the film depict these events?

END_OF_DOCUMENT_TOKEN_TO_BE_REPLACED

I had the opportunity to go to Fort Myers, Florida around Christmas last year and decided to take the local ghost tour. I have to say, it was one of the best I’ve ever been on–and I’ve gone on ghost tours and haunted walks all over the country (even one in Canada). The Haunted History Tour is part of Fort Myers’ True Tours. Check out some video below and then read my review! 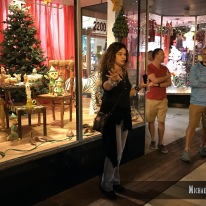 I’ve gone on over a dozen ghost tours all around the country, and even Canada, but for some reason I never thought to review one until now. The Haunted History Tour of Fort Myers, Florida was one of the best. Our tour guide, Lauri, was upbeat and enthusiastic. I learned a lot about the history of Fort Myers as well as its legends.

I had the opportunity to go to Fort Myers around Christmas last year and decided to do something fun one evening. From talking with locals, I learned downtown Fort Myers has gone through a renaissance in recent years. In 1985, it served as a shooting location for George Romero’s Day of the Dead. The abandoned downtown seemed like the perfect locale for a zombie film. Today, it is beautiful, with brick streets, plenty of lighting, bars, shops, and restaurants. I spent some time at a trendy art bar, Space 39, and a cool 1920s themed bar called The 86 Room.

The Haunted History Tour is part of Fort Myers’ True Tours. It’s easy to see their commitment to quality. Its founder, Gina Taylor, was the first director of the Murphy-Burroughs Home, former director of the Southwest Florida Museum of History, a founding member and vice president of the Lee County Trust for Historic Preservation, Board member of the River District Alliance and of the Matlacha Chamber of Commerce, and a member of the Southwest Florida Attractions Association.