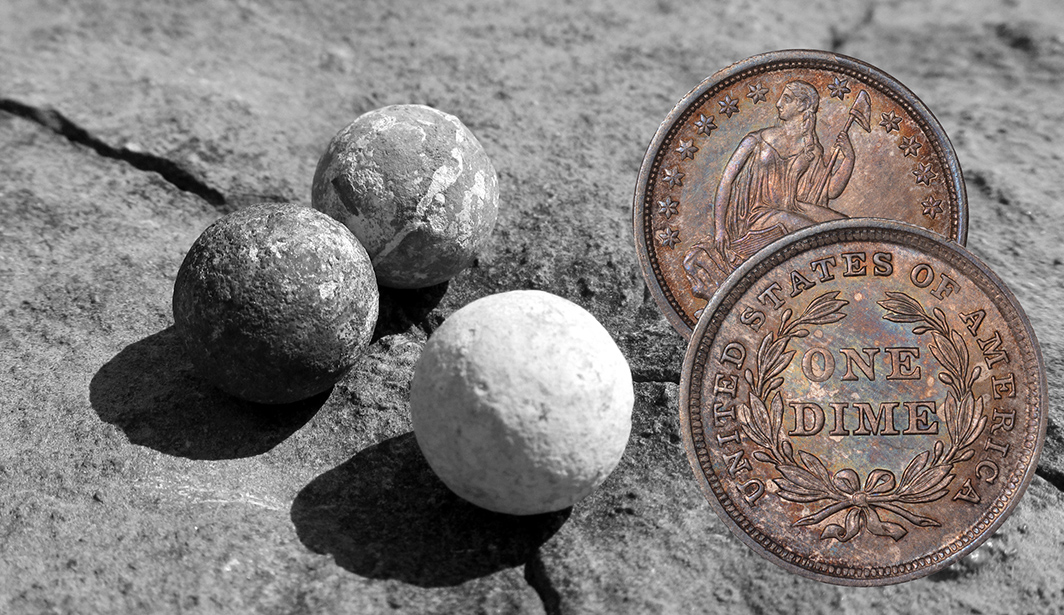 For over a century, Illinois pioneers believed silver was a powerful weapon against witchcraft.

Using a silver bullet to kill a werewolf is a common feature of modern horror movies and fiction, but pioneers once considered silver a powerful remedy for witchcraft. Typical counter-magic called for a witch’s effigy to be shot with a silver bullet, or for a more passive approach, a dime inserted into a shoe.

In nineteenth century Illinois, coins were the most readily available source of silver. Before the Coinage Act of 1965, dimes consisted of around 90 percent silver and 10 percent copper. In addition to being composed of precious metals, dimes issued prior to 1837 were slightly larger than today, with a diameter of 18.8 millimeters and mass of between 2.5 to 2.67 grams. Dimes could be worn as amulets, boiled in water, or melted down and molded into bullets.

Pioneers also manufactured silver bullets by drilling a hole in a musket ball and inserting a folded dime. Smoothbore muskets, which were still in use on the frontier after the development of the rifled musket in the 1840s, were versatile weapons that could fire a variety of homemade ammunition. Witch tales frequently ended with the protagonist drawing an effigy of the witch and shooting it with these silver bullets, which either broke the spell or destroyed the witch.

The improvement and increase in popularity of breech-loading rifles and standardized ammunition gradually eliminated this practice.

In this typical tale, told by an Irish informant from Adams County, Illinois to folklorist Harry Middleton Hyatt, the process by which the protagonist manufactured a silver bullet was explained in detail. “Some people were living by a witch and she was always borrowing from them or giving something,” he said. “They always had trouble. She came to the house one day and wanted to borrow lard. The man of the house said, ‘No. And I don’t want you to come here any more.’ The witch said, ‘You’ must let me have the lard for I am sick and must have it.’”

“The man let her have the lard and said after she was gone. Til fix her so she will not come back any more.’ He drawed the old woman’s picture on a piece of cardboard and took it out in the orchard and tacked it on a tree. Then went to the house and got a piece of silver and beat it all up into a silver bullet. You can always kill a witch with a silver bullet. That night just at twelve o’clock this witch started in the yard. This man shot through her picture on the tree and the old woman drop dead.”[1]

Charles Neely, Sr. related the following story to his son, folklorist Charles Neely, who explained that the story “was current in the southern part of Pope County a number of years ago.” In addition to a silver bullet, it also featured the motif of refusing to loan something to an accused witch. “Uncle Wesley Holt was sick with chills and fever,” Neely explained. “Medicine would do him no good. He decided at last that Old Man Toombs, the husband of Mary Toombs, had bewitched him.”

“To break the charm he drew a picture of Toombs and shot at it with a lead ball and missed the picture. Then he bored a hole through a ball and inserted a piece of silver. Then he shot again and hit the picture between the knee and the ankle. A few minutes later one of the Toombs children came over to borrow some coffee. He refused because to borrow something would break the charm. After that Old Man Toombs was afflicted with a sore on his shin as long as he lived.”[2] Pope County is located at the southeastern tip of Illinois, just north of the junction of the Ohio and Tennessee rivers.

In another incident, which allegedly occurred near Quincy, Illinois, a local entrepreneur hired one of his workers to shoot a drawing of a witch he believed to be disrupting operations at his sawmill. In this tale, the worker had to hang his drawing near where the witch walked into her yard and shoot it with a silver bullet as she passed by.

“Years ago down here in the bottom around Quincy a man had a sawmill,” the storyteller explained. “He had an order for seven thousand feet of lumber. He just could not get it out. He had been working on this order for about three months. Something went wrong all the time at the mill. An old witch lived down near his place and was always hanging around. He thought she was bewitching his sawmill.”

“He said to one of his men, ‘I will give you a dollar if you will take a piece of silver and make me a silver bullet to kill that old witch.’ The man said, ‘I will not do it. I don’t want the law after me.’ The sawmill man said, ‘The law cannot get you, if you shoot her picture and kill her.’ So he made a silver bullet himself and put it in the gun. Then he went and draw her picture on a piece of cardboard and put it on a tree right where this old woman would come into the yard. That night when the old woman started in the yard, he shot a hole right through her heart on this picture. When the old witch got even with this picture on the tree, she fell dead.”[3]

Bullets were not the only way to use silver to alleviate maleficium. One folk remedy was to boil silver in water and allow the afflicted animal to drink the concoction. According to William Henry Perrin, author of History of Effingham County, Illinois (1883), “If cattle were sick, it was the witches and nothing would do them any good except ‘silver tea.’ This tea was made by boiling a silver coin in water for a long time and giving the water to the sick brute.”[4]

Silver, particularly from dimes, could also be worn as charms or jewelry. One African American informant from Adams County explained to Harry Middleton Hyatt, “If you think you are hoodoo, put a dime in your right shoe, and if you are, the dime will turn black; then with it (putting the dime in your shoe), the spell will go back to the person that hoodoo you, and they will get the poison.”

Another added, “If you will take a dime and bore a hole in it and wear it all the time on you somewhere, you can’t be hoodoo,” and “If you tie a dime around each ankle, you can’t be hoodooed.”[5] This belief was not exclusive to African Americans. One Irish American resident of Adams County told Hyatt, “To keep the witches out of the house, place a dime under the fireplace.”[6]

Counter-magic typically involved common household items like pins, nails, needles, knives, forks, silver, and spices. Effigies or drawings of the witch enhanced the potency of the cure. These cures often appeared materially no different from the methods of the witches themselves. This was the “white magic” that confounded educated elites the the late seventeenth century. Nearly two centuries later, pioneers on the Illinois frontier still employed these magical folk remedies to alleviate maleficium and eliminate witches.