West Side Diner, at 1380 Westminster Street in Providence, Rhode Island, is a classic art deco, stainless steel 1947 Kullman model diner. Walter Scott began the first lunch cart/wagon service in Providence, Rhode Island in 1872, the precursor to modern diners and fast food establishments. Joseph and Mary Poirier opened this diner in 1947 on Atwells Avenue and operated it until 1955.

Like many diners, it had many owners and many names over the years, including Top Hat, Krystal’s, and El Faro. It closed in 1999, but a man named Jon Özbek saved it from the wrecking ball. It was restored and moved to its current location in 2011. It reopened two years later with new owners and a new name, the West Side Diner. It was added National Register of Historic Places in 2003. 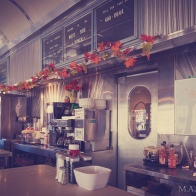 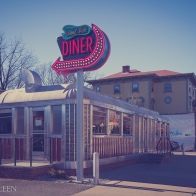