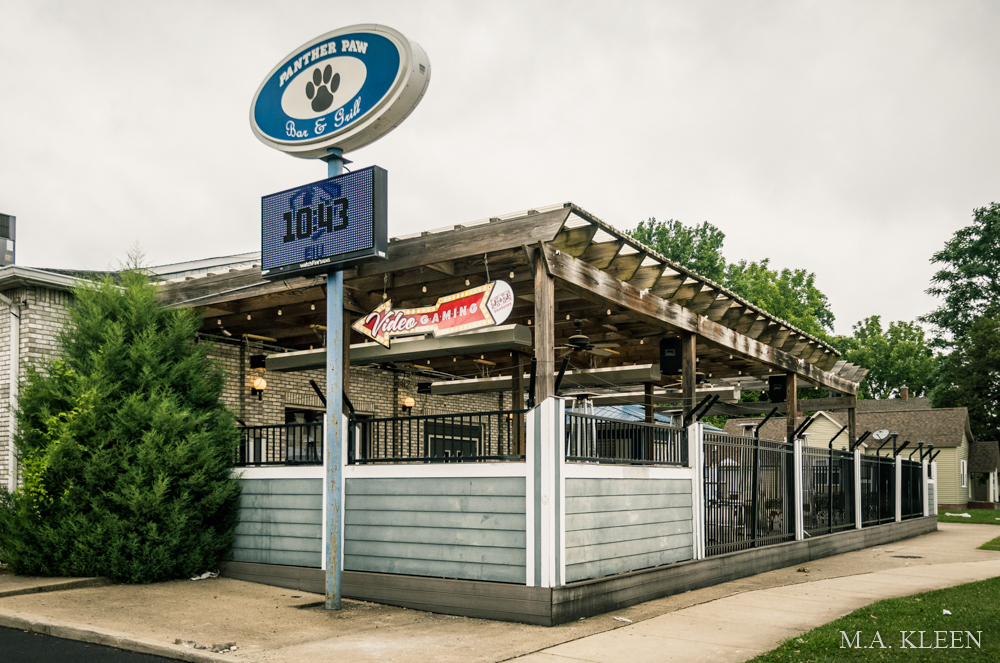 Welcome to the fourth installment of my series reminiscing about my time at Eastern Illinois University in Charleston, Illinois. I attended EIU from 2000 to 2008, eventually earning a Master’s in History. Both the college and the town have changed a lot since then. I wasn’t much for the bar scene in Charleston, but these local watering holes are a staple of college life.

Panther Paw Bar & Grill, at 1412 4th Street, is one of the closer bars to campus. It’s a short walk up 4th Street from Pemberton Hall, across Lincoln Avenue. It was originally owned by Don and Louise Yost and John Budslick and known as Stix, built during the summer of 1990 over a former residential site. Yost and Budlick had previously operated a billiard hall in Carbondale, Illinois by the same name, and thought it would be successful in Charleston.

Stix opened in early September 1990 and was originally a full restaurant and billiard hall, employing up to 60 people as waitresses, cooks, bartenders, disc jockeys, and doormen. It featured 15 Top Flyte pool tables and served breakfast, lunch, and dinner.

Ten years later, when I first stepped onto campus as a freshman, local tastes had changed. That summer, Stix rebranded itself as a dance club. They built a stage, refinished the floor with wood, and tore down several walls to open up a dance floor. Patrons ordered food through a window, rather than from a waitress.

I remember this version of Stix, which struck me as dingy even after the improvements. It was a sports bar during the day and dance club at night. I’ve already written about Friends & Co, the first bar I went to in Charleston on my 21st birthday. I visited Stix the next night with a few friends, but I was more impressed with their dollar hamburgers than anything else. It was Homecoming Weekend, and they were offering UV Mixers for $2.75 and “DJ Angry Mike” on the dance floor.

In the spring of 2005, an EIU alumni named Chris Clayton purchased Stix and renamed it Panther Paw Bar and Grill, or “The Paw” for short, after EIU’s mascot, the black panther.

The new name (which let’s face it, leaves something to be desired) was not initially popular. “I think it’s ridiculous; it just sounds dumb,” one student told the Daily Eastern News. However, when remodeling was completed, it got a brand new outdoor beer garden and a much cleaner interior. I could deal with the polo shirt and backwards baseball cap wearing sports crowd during the day, but after sundown I was like a fish out of water.

November 11, 2005 – Veteran’s Day weekend. It was a dry, breezy night, and the temperature hovered around 49 degrees. A friend and I were looking for a party but ended up at what I called “the establishment formerly known as Stix.” It was packed that night, but maybe that’s how it was every Friday night. Teamed might be a better word.  It was like spawning season, but the river was made of alcohol.

My friend and I ran into two women who used to live in the apartment next to another friend, who seemed nice enough.  They told us where an after party was, and we said we’d be there. An “after party” is where everyone went after the bars closed at 1:00 am; usually someone’s house or apartment. We ended up there later that night, but these same women ignored us, probably because of what happened next.

We walked around, struggling to swim upstream on the teaming dance floor, when my friend decided to leave me to get another beer. I had not come there to dance. I stood motionless while everyone bounced around me, and when a woman actually pointed at me with a ‘come hither look’, I was like a deer in headlights.

I don’t know if she expected me to break out some dance moves like John Travolta in Saturday Night Fever (is that a dated reference?) or Marques Houston in You Got Served, but I was able to quickly extricate myself from the situation. Thankfully, “last call” came and my friend and I staggered across the street to LaBamba’s for some food, but that’s a story for another day.

Panther Paw is still open, despite reduced enrollment at EIU, and more changes are on their way. Late last year, entrepreneur Miguel Rebollo announced plans to turn half the building into a Mexican restaurant called Casa Del Mar, with colorful and decorative updates to the interior. The western half would remain the Panther Paw. As it has for nearly thirty years, this establishment continues to be reinvented with the changing tastes of the student population.

One thought on “EIU Memories: Stix and Panther Paw”