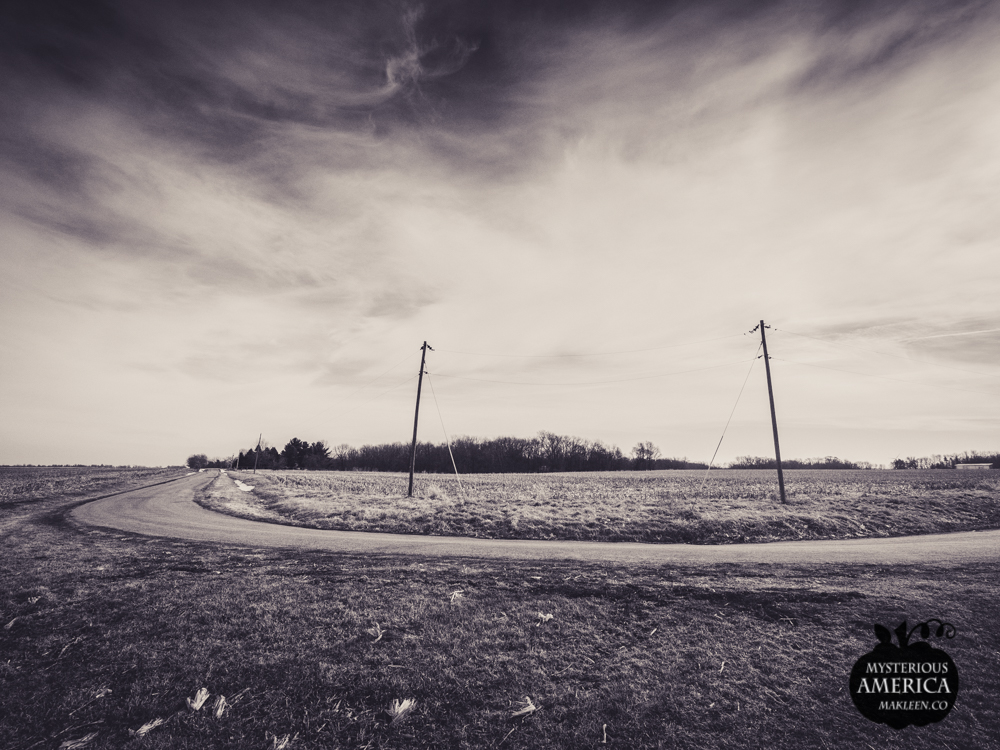 At this rural lane’s unassuming curve, a murderess committed “one of the most dastardly deeds that has ever occurred in Henry County.”

Less than a mile outside of Cambridge, Illinois sits Timber Ridge Road. As motorists travel west along Timber Ridge, they encounter a sharp curve marked by a Mulberry tree and an old, rustic fence that divides two cornfields. This bucolic scene hides a dark history, a history that few would remember if it were not for the ghost stories.

In 1896, Julia Johnson married a man named Clarence B. Markham, and the young couple settled on a farm in Andover Township outside of Cambridge. In nine years of marriage, Julia Markham gave birth to seven children, an average of one every 15 months. There were four girls and three boys, aged from between five months to eight and a half years.

On the morning of Saturday September 30, 1905, while her husband labored in a neighboring field, Mrs. Markham, to quote the Cambridge Chronicle, “committed one of the most dastardly deeds that has ever occurred in Henry County.”

At around 11 o’clock, Julia sent her two eldest children to a nearby spring to retrieve water. While they were gone, she took an ax and swung it at the heads of her five youngest, killing them instantly. When her eldest returned, she dealt with them the same way.

Julia had carefully planned the massacre and tried to commit suicide afterward, but the knife that she used to cut her throat was too dull. Wounded, she laid her children out on a bed and doused them with coal oil. She lit the oil on fire and the entire house went up in flames.

Meanwhile, the Markham’s neighbors saw smoke billowing from the house and rushed over. Intending to save the children, they instead stumbled upon a terrible scene. “Mrs. Markham stayed in the burning house until practically all her clothing was burned off, and then crawled out doors,” the Chronicle reported.

A Doctor on the scene informed her that she did not have long to live. Seeing the end was near, she confessed and died at 3 o’clock that afternoon.

Decades passed, and the ruin of the Markham’s home was plowed over. Their aging, red barn remained, however, and became a focal point for local teens who grew up hearing stories about the murders. Facts blurred and people began to report seeing the ghost of Julia Markham along the roadside. They blamed accidents at the curve in Timber Ridge Rd. on her ghost.

On May 19, 2007, the Moline Dispatch reported one eyewitness account of the haunting from 18 years earlier. The Markham’s barn was still standing at the time, and two young women drove out there looking for a place to hang out. As they neared the curve, they caught sight of something unexpected.

“On the fence, you could see something white floating off into the cornfield,” one of the women told the newspaper. “It was white with long flowing hair…” But a translucent phantom was not the only thing spotted along the road. Paranormal researchers Chad Lewis and Terry Fisk spoke with one woman who told them that she had seen a spook light floating near the old fence.

Today, there is nothing unusual about the curve in Timber Ridge Road, even less so now that the barn is gone. Aside from a few articles on dusty microfilm reels, nothing tangible remains that would remind passersby of the unspeakable acts committed outside the village of Cambridge that fateful day in 1905.

Yet the act of a mother murdering her own children—something so anathema to our basic values—is a stain that will not be so easily removed. The spirits of Julia and her children cry out from the grave.

4 thoughts on “Tragedy and Lore of Death Curve”