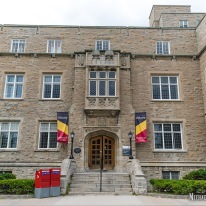 Queen’s University at Kingston, Ontario was founded by the Church of Scotland as Queen’s College in October 1841. Queen’s is one of Canada’s oldest degree-granting institutions, predating the country itself by 26 years. With such a long history, rich traditions, and fabled architecture, the university was bound to pick up a ghost or two. Nearly every building on campus has its stories.

It was originally a theological seminary, with a mission toward “the education of youth in the principles of Christian religion and instruction in the various branches in science and literature,” but secularized in 1912. In 1853, it settled in a limestone manor called Summerhill, which remains at the heart of campus.

The institution was not financially stable in its early years and almost disbanded, however, it survived and thrived and today is home to over 24,000 students with an endowment of over $1 billion. During the mid-twentieth century, money from the National Research Council and Ontario Research Fund sparked a growth of research laboratories, including the Sudbury Neutrino Observatory.

During the First World War, Grant Hall served as a military hospital and many of its students left to serve in the war. After the war, Queen’s experienced a growth spurt, when a library, residence hall, and stadium were constructed. In 1969, the university purchased a 61-acre parcel of land, then a prison farm and quarry, less than two miles west of campus. The Kingston Penitentiary water tower still stands next to John Orr Tower apartment building, and a popular (but false) legend maintains it was used for hangings.

The John Deutsch University Centre was built in 1947 after a fire devastated the old Students’ Memorial Union, which served as Kingston’s Orphan’s Home from 1862 to 1927. It was later named after Principal John Deutsch, who served in that position from 1968 to 1974. The new building was constructed on the ruins of the old. According to Glen Shackleton, proprietor of Canada’s original haunted tours, the ghost of Alfie Pierce, a former athletic assistant, haunts the building and the pub named in his honor.

The Etherington Art Centre began its life as a redbrick Victorian in 1879, but was remodeled into Georgian-style in the 1920s. It was home to Frederick and Agnes Richardson Etherington until 1954. When Agnes died, she bequeathed it to the university. Her husband was a one-time Dean of Medicine and Etherington Hall is named after him. Some believe Agnes has remained to keep a watchful eye. She is a reassuring presence, making sure its caretakers diligently look after her former residence.

Dunning Hall, at the southwest corner of University Avenue and Union Street, was built in 1960 and today is home to the Department of Economics. It originally housed the departments of Economics, Political Science, Geography, and Sociology, among others. An underground tunnel connects it to Macdonald Hall. During renovations in the 1990s, workers reported strange encounters, including unseen hands that would mysteriously tidy up after them and a transparent woman.

Not to be confused with Gordon Hall (pictured above), the Donald Gordon Center is a former country estate now owned by the university on Union Street. Today it’s used for meetings and conferences, but something from the past remains. Visitors describe hearing disembodied footsteps and seeing an elderly man dressed in a gray suit. Some believe he is the ghost of a judge who mistakenly sent an innocent man to the gallows.