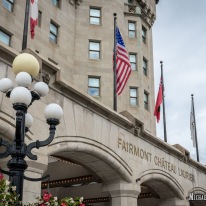 Fairmont Château Laurier in Ottawa, Ontario, is Canada’s most lavish and elegant hotel and sits just up Wellington Street from Canadian Parliament. The granite and white Italian marble building was designed in French Renaissance and neo-Gothic style and built in 1912 for $2 million at the behest of railroad baron Charles Melville Hays. Some say he never left.

Hays was born in 1856 in Rock Island, Illinois and raised in St. Louis, Missouri. Like many railroad tycoons, he began working at a railroad company as a young man and climbed up the ranks through hard work and dedication. He eventually became General Manager and later President of the Grand Trunk Railway of Canada. Hays dreamed of building a continental railroad across Canada with luxurious hotels for passengers along the way.

Tragically, just twelve days before the Château Laurier opened, Hays drowned when the RMS Titanic sank in the Atlantic Ocean on April 14, 1912. Since its completion, royalty, heads of state, politicians, and celebrities have all the graced the Château. Three movies: Captains of the Clouds (1942), Little Gloria: Happy at Last (1982), and H2O (2004), were filmed there.

Despite its romantic appearance, several deaths have allegedly occurred in and around the hotel, including suicide by jumping from the upper floors. Many strange stories center on the former Canadian Broadcasting Corporation (CBC) radio studio on the seventh floor, which occupied that space for 80 years. Former CBC Chairman Patrick Watson reported several unnerving incidents in his nearby suite. The ghost of an unnamed child has also been reported.

According to Glen Shackleton, proprietor of Canada’s original haunted tours, the ghost of Charles Hays is also believed to roam the Château’s halls. The encounters, including a disembodied voice singing, brushes with unseen hands, and doors opening and closing, are not very frightening.

“It’s said to be haunted and I definitely had some ghostly experiences,” a patron from London, Ontario, cryptically wrote on Trip Advisor. “I think I was on a particularly haunted floor though and however scary it was it didn’t scare me enough to make me not want to come back.”

Despite its widespread reputation for being haunted, there aren’t many specific ghost stories at the hotel–just the same tales retold over and over again. In a CTV Morning Live report, longtime Public Relations Director Deneen Perrin said she never experienced anything unusual in her 15 years working at the hotel, but confirmed some employees “feel something” out of the ordinary.