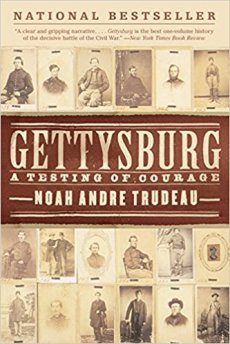 The Battle of Gettysburg, July 1-3, 1863, is the most well-researched battle of the American Civil War. In the 1990s, Noah Andre Trudeau began synthesizing decades of research to produce the first comprehensive book on that battle since The Gettysburg Campaign: A Study in Command (1968). Gettysburg: A Testing of Courage (2002) is the result of his effort. It is a sweeping narrative of that three day struggle, which resulted in approximately 48,000 American casualties.

Although Trudeau summarizes the entire campaign from beginning to end, Gettysburg: A Testing of Courage is primarily about the battle. It is also not strictly a military history. Like his book The Last Citadel: Petersburg, the author weaves the civilian experience, including townsfolk and journalists, into his narrative. It strikes just the right balance between anecdote and explanation, and never gets bogged down in minutiae.

The book is organized chronologically, which is helpful for keeping track of events across such a large battlefield. Unfortunately, it isn’t consistent. Events on July 3 are broken down practically hour by hour, whereas the entire attack on July 2 is given one section, from 4:10 p.m. to 10:00 p.m. I understand it’s difficult to determine when events occurred with one hundred percent accuracy, but breaking up that six hour period into smaller bits would have been helpful.

Trudeau is unique in arguing Richard S. Ewell, not Henry Heth, was responsible for initiating the Battle of Gettysburg. By mid-afternoon on July 2, Heth had withdrawn his division out of enemy contact in conformity with General Lee’s order. It was Ewell who decided to “come to Heth’s rescue” and bring on a general engagement. I see the merits of this unconventional argument. Trudeau continues to focus on Ewell’s actions, and the bizarre sideshow around Culp’s Hill, an often neglected aspect of the battle.

The author crosses a line, however, by asserting Lee had nothing to apologize for after the disastrous Pickett’s Charge. Everyone but Lee and Pickett seemed to know the attack would fail and commented to that effect at the time. In ordering the charge, Lee ignored previous experience and his most trusted corps commander’s serious misgivings. It was because Lee’s plan wasn’t properly or fully implemented that it failed, Trudeau argued. That strikes me as wishful thinking rather than a conclusion drawn from available evidence.

Overall, Gettysburg: A Testing of Courage is a competent and compelling narrative of the Gettysburg Campaign. It came on the heels of a long period of micro-histories of the battle, so a reexamination of the big picture was necessary. Since then, I think Stephen W. Sears has improved significantly on this effort, but Trudeau’s is still a solid work.

Noah Andre Trudeau (born February 23, 1949) is a former executive producer at National Public Radio who lives in Washington, D.C. He is a history graduate of the State University of New York at Albany. His other books include Like Men of War: Black Troops in the Civil War, 1862-1865 (1998), The Last Citadel: Petersburg (2014), and Southern Storm: Sherman’s March to the Sea (2008).

Gettysburg: A Testing of Courage by Noah Andre Trudeau, hardcover edition, was published by HarperCollins (New York, New York) in 2002. The hardcover is 694 pages and retails for $34.95. The Kindle edition sells for $8.99.