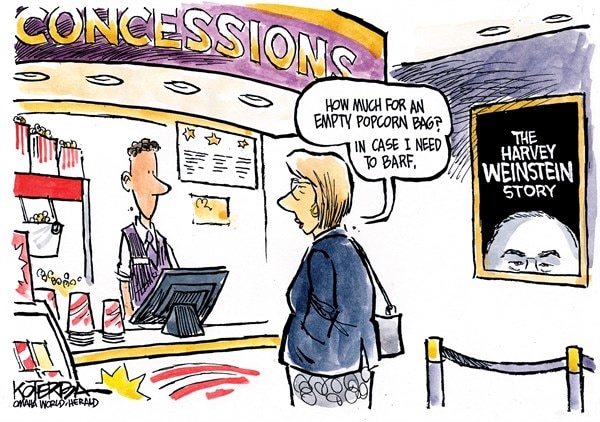 The idea that Hollywood is a place where dirty old men lure young women (and sometimes boys) with promises of stardom has been around pretty much from its inception. It’s an open secret some call the “casting couch culture.” Harry Cohn, co-founder and president of Columbia Pictures until 1958, was rumored to have a private room next to his office for dalliances, and accusations against Harvey Weinstein go back decades.

Who, then, is surprised by rampant libertinism and degeneracy in the entertainment industry? It’s been on the cover of every tabloid magazine since the beginning of print media. So why have all these accusations of sexual improprieties suddenly bubbled to the surface, and does it have anything to do with declining ticket sales?

Forbes recently ran an article citing 2017’s summer movie season as the lowest grossing summer for the movie business in 25 years. While it mentioned fallout from the Harvey Weinstein scandal, it mainly blamed the rising cost of theater attendance and a generational preference for watching movies on mobile devices.

It’s true ticket and concession prices have become grossly over inflated, but these explanations hardly scratch the surface. Young people aren’t going to the theater because they’d rather watch movies on a phone? Ridiculous. I think it has much more to do with the poor quality of films coming out of Hollywood. Netflix has experienced tremendous growth partly because their original movies and series are compelling, funny, clever, and creative.

The last time Paramount tried to release an “art house film” (Mother!), it was grotesque, disturbing, and pushed a social message in the audience’s face. In fact, the politicization of movies, I believe, has done far more damage to Hollywood’s credibility than a preference for iPads. It’s rare to see a movie anymore that doesn’t have some overtly political or social theme. Audiences go to the movies to be entertained, not lectured or preached to, especially by hypocrites.

Is it a coincidence that tight lips were the norm while the money was flowing, but now that Hollywood’s decline is apparent to all, the daggers have come out? That’s purely speculation, but I don’t see any other explanation for why people who kept quiet or heaped obsequious praise on Weinstein for years would suddenly and unprecedentedly turn on him. These are the same types of people who defended Roman Polanski after he plead guilty to raping a 13-year-old girl.

With new accusations coming out every week, if not daily, I think Hollywood has only begun to spiral down the toilet bowl. The entertainment industry has endured scandals in the past, but I genuinely believe it may not recover from this one, at least not in the foreseeable future. The social and financial repercussions are too great.

One thought on “Is Hollywood Imploding?”