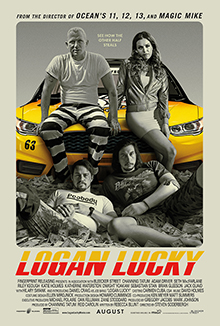 Logan Lucky is a black comedy heist film written by Rebecca Blunt and directed by Steven Soderbergh of Ocean’s Eleven (2001), Traffic (2000), and Erin Brockovich (2000) fame. “Rebecca Blunt” is an unknown British screenwriter, which has led some to speculate the name is a pseudonym. Whatever the case, it’s a fun movie with the same fast-paced and clever film making as the Ocean’s series.

When Jimmy Logan’s (Channing Tatum) ex-wife, Bobbie Jo Chapman (Katie Holmes), plans to take their daughter, Sadie (Farrah Mackenzie), from West Virginia to North Carolina with her new husband, Moody Chapman (David Denman), two Appalachian families rob the Charlotte Motor Speedway during the Coca-Cola 600 to pay for a lawyer to contest the move. The threat of the “Logan family curse” hangs ominously over the operation.

Jimmy is aided by his one-handed brother, Clyde (Adam Driver), their sister, Mellie (Riley Keough), and Joe Bang (Daniel Craig) and his brothers Fish (Jack Quaid) and Sam (Brian Gleeson). Together, this crew of eccentric misfits pulls off the heist and each lives happily ever after, or so it seems. In the final scene, we see a FBI agent played by Hilary Swank carefully watching them under cover.

The song “Take Me Home, Country Roads” by John Denver, a nostalgic tribute to West Virginia, frames the movie. As it opens, we see Jimmy Logan and his daughter fixing a truck while listening to the song. Near the end, Sadie gives an unpracticed but heartfelt rendition of the song during the talent portion of a beauty contest, winning over the audience and judges.

In Logan Lucky, everyone seems to get what they want, except Jimmy Logan himself. Sadie wins the beauty contest, Joe Bang replaces the money his wife stole, Clyde gets a mechanical hand, Sylvia Harrison (Katherine Waterston) receives a large donation for her mobile free clinic, and even the Charlotte Motor Speedway gets a huge insurance payout after the robbery. But Jimmy’s original purpose for stealing the money goes unfulfilled.

Because Logan Lucky was deliberately crafted as a “poor man’s Ocean’s Eleven,” it’s difficult to evaluate one without the other. Both are entertaining, fast-paced, smart, and a little subversive, but Logan Lucky fails in areas where Ocean’s Eleven succeeded, particularly in the realm of character development.

With such an ensemble cast, it was difficult to follow all the characters’ motivations. In Oceans Eleven it was easy because they were all thieves and their motivation was obvious, to get rich and pull off the most daring heist in history–to do something no criminal has ever done before.

In Logan Lucky, Jimmy Logan’s motivation is explained, but most of his accomplices are just average people who are trying to put past transgressions behind them. His sister, Mellie, seems to be just going along with the scheme for no reason at all. No one even really tries to talk him out of it.

The characters in Ocean’s Eleven are likable and have fully-developed personalities. Despite being criminals, we want to spend time with those characters and hope they succeed. In contrast, personality quirks substitute for genuine personalities in Logan Lucky, and we never feel animus for the Charlotte Motor Speedway like we did for casino owner Terry Benedict.

Joe Bang likes to eat boiled eggs. Clyde Logan has one hand and obsesses over the Logan family curse. Fish and Sam “got right with the Lord” and enjoy hanging out at the carnival. Mellie is a hair stylist. Beyond repetition of these character traits, they are just weird and gross people.

Moody Chapman, in contrast, seems like an upstanding guy, despite a questionable approach to parenting (his sons, played by Boden and Sutton Johnston, are hilarious). Despite Bobbie Jo having full custody of Sadie, he has no problem with Jimmy Logan spending time with his daughter and tries to treat both Jimmy and Mellie as family. For his efforts, they make fun of him, reject his overtures, and even trash his sports car. The audience is supposed to sympathize with these jerks?

Despite these shortcomings, Logan Lucky is a well-made and entertaining film that’s fun to watch and keeps the audience on its toes. It plays on Southern stereotypes but not in a condescending or demeaning way. It continues the tradition of “white trash” comedies including Raising Arizona (1987) and O Brother, Where Art Thou? (2000) and is a welcome departure from the other lazy, poorly written and acted comedies released this year.

One reply on “Logan Lucky: A Trailer Park Ocean’s Eleven”

[…] been thinking about two movies I watched this year, Logan Lucky and Rough Night. Both can be considered black comedies about people getting away with crimes. In […]