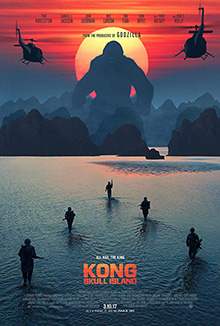 Samuel L Jackson fights CGI monsters in this nostalgia-driven reboot of the 1933 classic King Kong. This is the third remake/reboot of King Kong. Though essential elements of the original remain, Kong: Skull Island (2017) is set in 1973, at the end of the Vietnam War. It is replete with counter-culture references and music from the period, with the addition of a marooned WW2 vet to appeal to Baby Boomers and their parents alike. Nostalgia is the only explanation I have for why this film has gotten such good reviews. The dialog, acting, plot, and CGI are all mediocre. Its only redeeming quality is the ending fight scene between Kong and a giant skullcrawler called Ramarak.

The plot is straightforward. Bill Randa (John Goodman), a monster-hunter, attains funding to travel to an uncharted Pacific island under the guise of a geologic  mapping expedition. He enlists the help of former British Special Air Service Captain James Conrad (Tom Hiddleston), Lieutenant Colonel Preston Packard (Samuel L. Jackson), and “antiwar” photojournalist Mason Weaver (Brie Larson), alongside various Landsat employees. Once over the island, they encounter Kong, who smashes their helicopters. The survivors find a primitive tribe living on the island, alongside a stranded WW2 fighter pilot, Hank Marlow (John C. Reilly). From there, they must cross the island to safety while avoiding oversized creatures and carnivorous skullcrawlers.

While the 2005 Peter Jackson remake staring Jack Black wasn’t great either, I preferred that version of Kong. He was essentially just a giant silverback gorilla, with complex emotions and mannerisms copied from real life. In contrast, this Kong was as tall as a skyscraper, walked upright, and had two emotional states: pensive and roaring loudly. He’s also somehow impervious to .30 cal machine gun bullets, fire, and razor-sharp teeth.

1973 was an interesting setting for a Kong movie. In many ways this hearkens back to the 1976 remake, which also takes place in the ’70s and features a helicopter battle with the monster. The settings, music, props, and cinematography all carefully reflect that period. In this timeline, Bill Randa is eager to reach the island before newly launched U.S. satellites can map it, revealing its secrets. Randa sees President Richard Nixon announce troop withdrawal from Vietnam, and determines he must attain funding for his expedition before the war ends and Congress tightens its budget. Historically, the Earth Resources Technology Satellite was launched on July 23, 1972. It wasn’t called Landsat until 1975–a minor discrepancy.

Lieutenant Colonel Preston Packard comes close to being the film’s primary antagonist. As commander of an air cavalry squadron, the Sky Devils, Packard is the arch-typical “warrior without a war.” “We didn’t lose the war,” he tells Mason Weaver, “we abandoned it.” He relishes the chance to go on one final mission. When Kong ravages his squadron, destroys his helicopters, and kills his men, Packard becomes obsessed with revenge. He refuses to leave any man behind, taking his remaining troops on what seems like a suicide mission to recover Major Jack Chapman (Toby Kebbell). When Chapman dies, he persists with his determination to kill Kong.

While Packard is supposed to the bad guy, he’s the only character whose motivations make sense. After Hank Marlow explains Kong has been protecting the tribesmen from skullcrawlers, James Conrad tells Packard that Kong was “just defending his territory” when he attacked their helicopters. Uh, ok? Unlike Conrad, who has no emotional ties to any other character, Packard has served with these men in war, presumably for years. He has an obligation to protect his men and recover them if they go missing. Can you blame him for being a little pissed off when he sees them butchered by a giant ape?

Something else bothered me. Throughout the film, the main characters are covered in bile, muck, mud, dirt, blood, smoke, and scorched by flames, yet remain relatively unscathed. Mason Weaver and biologist San Lin (Tian Jing)’s hair and makeup are perfect. They also barely react to their environment. In one scene, they stumble on a boneyard with the skeletons of Kong’s parents, killed by skullcrawlers. “Do you smell that?” Marlow asks. “That’s death.” Yet no character reacts to the smell at all, probably because they’re standing in front of a green screen. Later, Weaver and Conrad stand face-to-face with Kong, again with no reaction. I’m betting a giant gorilla that eats squid smells pretty bad–gut-wrenchingly bad. At least in the 1976 version, Jeff Bridges and Jessica Lange’s characters are dirty, wet, and their clothes are torn in the jungle.

The movie credits photojournalists like Mason Weaver for ending the Vietnam War, using photographs of war’s horrors to stoke antiwar sentiment back home. Likewise, Bill Randa hopes to use photography to prove the existence of monsters on Skull Island. On several occasions, the audience sees the exotic creatures and settings through Weaver’s camera lens. In one scene, a skullcrawler swallows Randa and his camera. The camera flash reveals its location in the smoke to the other characters, allowing them to escape. I thought this theme, the power of cameras and photography, was one interesting aspect of this film.

Overall, Kong: Skull Island wasn’t as bad as its predecessors, but fell short in many critical areas. John C. Reilly, and Samuel L Jackson to some extent (in the vein of Snakes on a Plane and Deep Blue Sea), was there for comic relief, but the jokes fell flat. John Goodman is also traditionally a comedic actor, and Brie Larson is mostly known for playing Natalie “Envy” Adams in Scott Pilgrim vs. the World. So I wasn’t sure whether this was supposed to be a campy, fun monster movie, a commentary on the Vietnam War, or an action-packed adventure film. Whatever it was supposed to be, it never rose above the level of a typical popcorn flick.