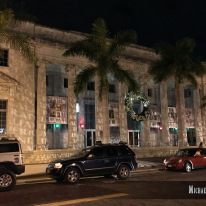 I’ve gone on over a dozen ghost tours all around the country, and even Canada, but for some reason I never thought to review one until now. The Haunted History Tour of Fort Myers, Florida was one of the best. Our tour guide, Lauri, was upbeat and enthusiastic. I learned a lot about the history of Fort Myers as well as its legends.

I had the opportunity to go to Fort Myers around Christmas last year and decided to do something fun one evening. From talking with locals, I learned downtown Fort Myers has gone through a renaissance in recent years. In 1985, it served as a shooting location for George Romero’s Day of the Dead. The abandoned downtown seemed like the perfect locale for a zombie film. Today, it is beautiful, with brick streets, plenty of lighting, bars, shops, and restaurants. I spent some time at a trendy art bar, Space 39, and a cool 1920s themed bar called The 86 Room.

The Haunted History Tour is part of Fort Myers’ True Tours. It’s easy to see their commitment to quality. Its founder, Gina Taylor, was the first director of the Murphy-Burroughs Home, former director of the Southwest Florida Museum of History, a founding member and vice president of the Lee County Trust for Historic Preservation, Board member of the River District Alliance and of the Matlacha Chamber of Commerce, and a member of the Southwest Florida Attractions Association.

I was relieved to learn that only thoroughly researched and vetted locations are included on the tour. According to Taylor, she started True Tours to help preserve the fascinating history of Ft. Myers and help revitalize the historic river district by providing another draw to the area. Both admirable goals.

Lauri had previous experience guiding tours in the Virgin Islands, and it showed. Her enthusiastic recounting of local hauntings kept our tour group enthralled. One of the most interesting places we visited was a former school called the Andrew D. Gwynne Institute, now an annex for the School Board of Lee County. It is allegedly haunted by the ghosts of a former schoolteacher and a young child. Our tour guide dutifully showed us several pictures of the “ghosts” peering out the windows, though she was totally creeped out by them.

Other stops included the Arcade Theater, former courthouse, and a former hotel above The 86 Room. Unlike the other buildings downtown, the hotel was still under renovation. Standing on the street, you can look up at the ceiling through the windows and see the dusty, weathered wood. Visitors and construction crews report feelings of dread in the old building. In a former dress shop across the alley from the Cowboy Up Saloon, a misogynist spirit is believed to play pranks on women.

The Haunted History Tour of Fort Myers uses cardboard fans as tickets, which can be shown for discounts at participating shops downtown. It’s rare to see a tour so well developed and organized. I would count this among the best in the country.