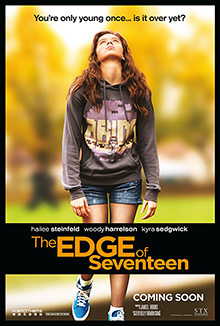 In The Edge of Seventeen (2016), 17-year-old Nadine Byrd (Hailee Steinfeld) navigates the awkwardness of becoming an adult in her junior year of high school after her father dies of a heart attack. She reaches a crisis point when her only friend, Krista (Haley Lu Richardson), hooks up with and begins dating her older brother, Darian (Blake Jenner). Her relationship with her mother, Mona (Kyra Sedgwick), further deteriorates as Nadine vents her frustration on friends, family, and her history teacher, Mr. Bruner (Woody Harrelson). The cloud has a silver lining when she meets a similarly awkward young man, Erwin (Hayden Szeto).

The film has some bright spots, and some genuinely funny or touching moments, but mostly it is just the same cliched teen movie we’ve seen a hundred times before. Not Another Teen Movie already satirized this film in 2001. It may have a deeper meaning, however, if what I perceived as a genuine portrayal of mental illness turns out to be accurate.

Critics loved this movie, and for the life of me I can’t figure out why. Molly Eichel at the Philadelphia Inquirer wrote, “The Edge of Seventeen is funny and tragic, but most of all it feels real in the same way John Hughes movies felt real. It’s not a candy-coated version of teenagedom. It’s harsh, and awkward, and funny, just like being a teenager.” Other critics called it “straight and sincere,” “smart and perceptive,” and “there isn’t a moment in this movie that doesn’t feel completely true.” Who paid them to write this nonsense?

Numerous critics have laughably compared this film to John Hughes’ 1980s teen comedies. If only it was half as authentic. The Edge of Seventeen exists in an imaginary world where everyone owns a backyard pool, no one is overweight, and even the nerds have washboard abs. I actually rolled my eyes when geeky, stuttering Erwin takes off his shirt to get into the pool, revealing a toned, athletic figure. Nadine Byrd is another shy, awkward character played by a runway model who becomes beautiful and well dressed after spending a quick montage at the bathroom mirror.

As I was watching The Edge of Seventeen, I realized that something was going on beyond just the typical “awkward self-loathing teen.” Although the film is purportedly about a young woman dealing with typical teenage angst, most of the teenagers in the movie actually seem happy and well-adjusted. It’s subtle enough not to catch, but if you pay attention, you will realize that Nadine Byrd and her mother are seriously mentally ill. Nadine’s mother is hysterical, controlling, promiscuous, and dependent on her teenage son for stability. At one point, she turns to her daughter and explains that she only pretends to be happy, when she really feels empty inside.

Nadine acts very much like her mother. She has unstable relationships with other people, an unstable sense of self, and unstable emotions (acting out in fits of anger). She has an extreme fear of abandonment (revealed in her overreaction to her brother and best friend’s relationship), dangerous behavior (telling a boy she just met she wants to sleep with him, then allowing him to drive her to a remote parking lot where she suddenly changes her mind), a feeling of emptiness, and self-harm (binge drinking, threatening suicide). These are all symptoms of borderline personality disorder. BPD can be inherited, or triggered by a traumatic event (death of a close loved one, for example).

If true, The Edge of Seventeen has a terrible message for viewers, which is that Nadine will simply “grow up” someday and stop feeling this way. Yes, everyone does grow out of typical teenage awkwardness and identity crisis, but a serious mental illness like BPD requires regular medical attention. I’ve known people who suffered from this disorder, and it has a lasting, devastating effect on personal and romantic relationships. If left untreated, Nadine’s disorder will likely follow her to college, where she will engage in riskier behavior, substance abuse, and continue to have feelings of abandonment and self loathing.

Woody Harrelson’s character, Mr. Bruner, is a bright spot in the film. He plays the part of an aging, sarcastic teacher well. I wish the rest of the film’s dialog was as witty, subtle, and surprising as his exchanges with Nadine. Unfortunately, The Edge of Seventeen is one awkward scene after another loosely strung together by a boilerplate plot, resolved neatly at the end because “love conquers all.” Much to my disappointment, it’s not as witty, genuine, and endearing as critics claim.

10 replies on “The Edge of Seventeen”

I have a hard time sympathizing with this particular fictional character, not with people who are actually suffering from BPD. My problem is with the way this movie treats it like it’s just what all teenagers go through, when it’s definitely not

As someone with BPD, I think this movie is spot on it its entirety. I think I take issue with your review because of course this movie requires empathy.

Nadine watched her father have a heart attack. I think people’s dislike of this movie comes from an inability for people to not understand how hard it can be to grow up feeling the way Nadine did, only to lose one of two people who show they care.

Teenage girls are dismissed in society and your review only furthers that. Nadine isn’t a bad person. She’s hurting. If people choose to not like her, that’s fine. But I think you are missing the point that girls like me grew up bullied and felt unloved or abandoned by everyone in their lives.

Also people with BPD have hope of recovering.

And also Nadine does reach some self awareness. Recovery is a slow process.

Thought of BPD while I was watching the movie as well and am surprised that not a lot of people clued in on it. Her behavior shows it explicitly. One moment keen to receive love, the other harshly pushing everyone away. She’s moved by her intense emotions to dangerous degrees for most of the movie.

Honestly, I thought that this was intentional. Having not read the plot prior to watching, I truly thought that the movie was about a teenage girl with borderline personality disorder. I even liked it because of this interesting angle. But a quick google search has proven me wrong: people seem to take this as normal, permitted behavior for teenagers. Yikes.

Thanks! I appreciate your insights as well

Wow, you were spot on. I thought to myself while watching this film, I think I spot BDP. Which made me do a search and I found your write up. In a lot of the scenes I saw mental illness in the mother the effect her behaviours had on the kids. They were divided. For example the son being labelled ‘the perfect kid’, basically the golden child. The daughter the out of control one or black sheep of the family. It would appear the daughter seems more troubled since the the son seemed to have a handle on life. Though he reveals that he was planning his life to revolve around his mother and sister as their ‘care taker’. So while the daughter was expressing her anger outward the son was keeping it inward, more like the mother. Since the main character was the daughter, you don’t really get more into depth with her brother. He appears to be picture perfect and that in itself can create a whole other line of problems down the road for him as they’re both still in Highschool. How do I know, well I was more like the son as well when I was that age. People with mental illness don’t get better over time, not when the moods are that extreme. When the mother texted back ‘ok’ after her daughter wrote she was safe, I laughed. As if she became more self aware regarding her own impulsive mood reactions. It’s not realistic whatsoever. The mom appeared covert in her illness which is another major issue in terms of finding and getting the right help. A lot of people don’t know how to handle BDP because it’s so vast from person to person, there is no one set treatment which can make it challenging for even the experts to work with.

Yes! Glad I’m not the only one who picked up on it

I’m so glad I’m not the only one who thought of this. As I was watching the movie, I was just running down the checklist in my mind: “does she have BPD?” (I also wondered if her mother might be bipolar, although a few mentions might not be enough to make that assumption). Nadine certainly seems depressed, but there’s more to it than just that.

With these suspicions, I found the ending quite anticlimactic. Supposedly she finds a new group of friends and mends her relationship with her family. That doesn’t undo anything, much less lead to any realizations on her part. I was hoping that the movie would at least let her increase her self-awareness that could help her in the future. But no… it just ends on a good day. Which means that the pattern of unstable behavior we’ve seen throughout the whole movie is just swept under the rug and forgotten. For a movie that tries to play the mental health card (casual reference to antidepressants, irrelevant to the plot but I’m guessing it was there for a reason) it’s… disappointing.

Nope. While it certainly portrays her and her mother with borderline personality disorder, there is no reason the viewer should assume the disease is over. The movie ends on a good day, but it certainly doesn’t imply no bad days will follow.