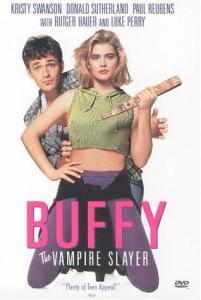 Few people remember the 1992 film Buffy the Vampire Slayer staring Kristy Swanson, Donald Sutherland, Paul Reubens, and Luke Perry, but the television show based on it would go on to become hugely popular. Buffy is one of my favorite horror comedies from the ’90s. Joss Whedon wrote it as a serious vampire film, but the studio turned it into a comedy. In a stroke of luck, he was able to return to his original vision when he created the TV series.

The series retained the essential elements of the film: a teenage “Valley Girl” destined to become the chosen slayer of vampires, her watcher, and an ancient evil that unleashes a plague of vampires on her hometown. The TV show occasionally references the events of the movie, but not explicitly. Buffy the Vampire Slayer the series starred Sarah Michelle Gellar, Nicholas Brendon, and Alyson Hannigan had a seven season run, from 1997 to 2003. It quickly gained a cult following. The following is a list of my favorite seasons, ranked from best to worst and why.

At the beginning of season six, Willow resurrects Buffy, who died at the end of season five. Although her friends believe they rescued her from Hell, Buffy had actually been in Heaven. This causes her to be depressed for most of the season, and leads to her giving in to Spike’s affections. Willow becomes addicted to magic, and a new set of antagonists, a group of nerds called “The Trio,” are introduced. When one of the Trio accidentally kills Willow’s girlfriend, Tara, Willow is consumed by revenge and rages out of control. She attempts to destroy the world to end everyone’s suffering. By reminding Willow of their friendship, Xander is the only one who can bring her back from the brink.

Season six is my favorite because I like Willow’s character and liked to see her progression over the course of the season. In past episodes, we caught a glimpse of what “evil Willow” might be like, and season six shows her as a formidable opponent. Of all characters on Buffy, Willow is the only one to undergo a significant evolution and the only one besides Buffy who ever had an entire season’s story arch devoted to her. In this season, Buffy and friends find their relationships tested like never before, which makes for great drama. In the end, Xander is the one who saves the day, not through great strength or magic, but simply through friendship, devotion, and love. Although I personally disliked the musical episode, “Once More, with Feeling,” it is a fan favorite.

After attempting to start a new life in Los Angeles, Buffy returns to Sunnydale and is reunited with her friends and her mother. Angel is resurrected, and a new slayer named Faith (played by Eliza Dushku) appears. The third season’s antagonist is Mayor Richard Wilkins, who plots to ascend into demonic form. During the course of the season, Faith turns evil and Angel’s loyalties are questioned. The Watcher’s Council also removes Giles from his position, though he remains a reoccurring character.

Who doesn’t like Eliza Dushku? Her character, Faith, is a Nietzschean foil to Buffy, who always tries to do the right thing. Faith is far more complex–seeking out the situation that most benefits her. At first that means being friends with Buffy, but later it means allying herself with the Mayor. The idea of a “bad slayer” was a concept worth exploring. She is clearly seeking a father figure, who she finds in Mayor Wilkins. Faith and Wilkins develop genuine affection for each other, which adds depth rarely seen in Buffy villains. “Gingerbread” (unconnected to the main plot) is one of my favorite episodes. Sunnydale’s parents go on a witch hunt after two mysterious children are found dead. It turns out the children were actually demons thriving on human suffering. The episode puts a clever spin on folklore.

The first season introduces Buffy Summers, Xander Harris, Willow Rosenberg, a vampire named Angel, Cordelia Chase, and Buffy’s new watcher, Rupert Giles, who remain main characters throughout most of the series. Buffy movies to Sunnydale to escape her past, but discovers Sunnydale High is built over the Hellmouth, a portal to a demonic dimension. An ancient evil known as “The Master” is trapped there and wants to open the Hellmouth and take over Sunnydale. In what becomes a reoccurring theme, Buffy briefly dies in the final episode.

It was difficult to determine which season was better: one or four. In the end, I think season one wins out because it is “classic” Buffy, with a much more compelling story arch. The one-off episodes are solid–a substitute biology teacher that turns into a praying mantis, a witch who swaps bodies with her daughter to be on the cheerleading squad, and a genuinely creepy episode involving a possessed dummy. My favorite episode is “Out of Mind, Out of Sight,” in which a girl literally goes invisible after being ignored by her teachers and fellow students. At the episode’s end, we are shown a glimpse of a secret government school for invisible children. I always wondered if that would play a role later in the series, but it never reappears.

In season four, Buffy and Willow enroll at UC Sunnydale while Xander finds a job. Spike returns to Sunnydale and is abducted by The Initiative, a top-secret military installation based beneath the UC Sunnydale campus. They implant a microchip in his head which prevents him from harming humans. He reluctantly helps Buffy and her friends throughout the season and eventually begins to fight on their side after learning that he can harm other demons. Two new relationships develop. Willow falls in love with Tara Maclay, another witch, and Xander gets into a relationship with a former vengeance demon named Anya Jenkins.

Season four contains some of Buffy’s most entertaining episodes. Despite cracked.com’s knock on the episode “Beer Bad,” I actually thought it was clever and funny. In episode four, a frat Halloween party goes bad and the gang is stuck inside the house tormented by their fears. In another episode, Willow’s spell backfires and we’re treated to a scary (and hilarious) glimpse of Buffy and Spike in love. Of course, this season also features the episode “Hush,” which is widely considered to be one of the series’ best. It was the only episode to be nominated for an Emmy Award in Outstanding Writing for a Drama Series. Faith also makes an appearance. Despite these positives, I thought the overall plot involving The Initiative was weak and uninspired.

Season five introduces Buffy’s younger sister, Dawn, who suddenly appears. Although she is new to the series, the other characters believe she has always been there. The season’s antagonist is Glorificus, or Glory, a hell-goddess who was exiled from her dimension. She can only remain on earth by being connected to her human form: a medical intern called Ben. Glory takes the form of a beautiful woman, with some powers still intact as long as she maintains her strength through draining people of their sanity. She searches for a “Key” (Dawn) that will allow her to return to her dimension, and in the process will unleash Hell on Earth. To destroy Glory, Buffy sacrifices herself and once again dies.

Although I like Michelle Trachtenberg, the actress who plays Dawn, I thought the introduction of her character was weird and off-putting, an obvious “Cousin Oliver” used to maintain the show’s appeal with younger audiences. Dawn turned out to be a good addition to the show, but her inclusion could have been handled better (maybe she was a step-sister, adopted, or even away at boarding school for the first four seasons). I also thought the season’s main villain, Glory, was one of the show’s worst (alongside Adam from season four). My favorite episode from the season was “The Replacement,” when Xander’s personality is physically split in two, between a strong, confident Xander and a weak, awkward one.

Buffy and Angel’s love affair is the main arch of season two. New vampires are introduced, including Spike and Drusilla, and each character is involved in a relationship. Xander becomes involved with Cordelia, Willow falls in love with a drummer (and werewolf) named Daniel “Oz” Osbourne, and Giles meets Jenny Calendar, a librarian and techno-pagan. After having sex with Buffy, Angel loses his soul and reverts to the evil Angelus. In the end, Angelus is destroyed, but not before Buffy mistakenly banishes Angel by stabbing him with a magical sword. Devastated, she flees Sunnydale.

Before Twilight’s human-vampire love affair, there was Buffy’s. Both were equally lame. Angel’s character has no redeeming qualities; he does nothing but brood and look dark and mysterious and suffer from a tragic past. Besides transitioning between emo and evil, his character never changes. Never the less, Buffy and Angel’s relationship was what made Buffy so popular. I never got it. In contrast, Spike and Drusilla are the highlight of the second season. Their relationship is passionate. You can tell they have a long history. There is conflict, jealousy, and affection–like a real relationship. As a soulless vampire, Spike has more personality and passion than Angel, a vampire with a soul.

In Buffy’s final season, a new antagonist arrives in Sunnydale named Caleb, who worships The First Evil. He is opposed by an uneasy alliance between Buffy, her friends, Faith (who returns), Spike, and a group of young, potential slayers. Dawn attends a rebuilt Sunnydale High, where Buffy gets a job as a councilor. In the end, Buffy and friends destroy The First Evil and the Hellmouth collapses, swallowing all of Sunnydale.

The final season of Buffy was a mess, and white knight Joss Whedon’s personal biases are pushed to the forefront, filling it with cliches. Buffy always had a feminist undertone, and that’s fine, but this season removes all subtlety–even featuring a misogynist former priest as a main villain. At the end of the season, Buffy activates all the potential slayers, showing how the power “was inside them all along.” Yawn. Season seven’s only redeeming quality was that Faith’s character returns and finds redemption.