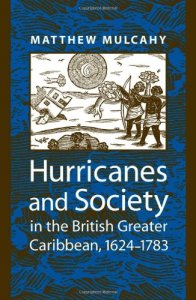 Hurricanes and Society in the British Greater Caribbean, 1624-1783 by Matthew Mulcahy is a revealing look at an obscure topic. Historians rarely give weather such an in-depth treatment, so it’s interesting to see how these weather events affected Britain’s Caribbean colonies. Quite a bit, as it turns out. Hurricanes influenced colonists’ morale, their perception of the natural world, health, social order, and economy. Hurricanes were an ever-present disruptive force that compelled colonists, and plantation owners in particular, to change the way they did business. They also caused an untold amount of damage to crops, human capital (slaves), and shipping throughout the region. Colonists had to rebuild and replant after every major hurricane in addition to meeting their basic survival needs, which put strains on every other aspect of colonial life.

Hurricanes undermined colonists’ morale by challenging the concept of improvement and by testing their faith that they could “dominate and transform” nature. British colonists came to the Caribbean with a sense they were pursuing a divine mission, so when hurricanes destroyed everything they built, their faith was shaken. “The threat from hurricanes helped create a sense of fragility and uncertainty among colonists as the possibility of violent destruction and chaos hovered over the region each year,” Mulcahy argued.

Central to the colonists’ sense of themselves was the belief they were taming and improving nature, but the destruction wrought by hurricanes demonstrated that nature would not be so easily tamed. Ironically, some of the “improvements” made to the Caribbean islands, such as the cutting down of trees, made colonists more vulnerable to the storms. Taken together, these effects caused some colonists to question whether they could successfully transplant English life and culture to the Caribbean.

Hurricanes affected the colonists’ perception of the natural world as well. While many colonists originally interpreted the violent storms as the wrath of God, their perception changed as they began to observe the regularity of hurricanes. Consequently, their understanding of hurricanes led to a more mechanistic view of nature. “Colonists no longer viewed hurricanes as ‘strange’ and ‘unusual’ but saw them as routine and expected,” Mulcahy argued. First, colonists learned that hurricanes occurred annually within a well-defined season. Second, hurricanes hit islands randomly regardless of which colonial power was in control, demonstrating to the British colonists that neither they nor their enemies had been “singled out” by a vengeful God. Finally, colonists learned to look for natural signs that a hurricane was brewing, making the storms nearly predictable. By 1700, these factors had convinced many British colonists that hurricanes were part of the natural world, a world that was governed by fixed rules.

Hurricanes weakened the health of the British colonists, but they struck slaves particularly hard. Because plantations were a significant source of food for the colonists, and hurricanes devastated plantation crops, periods of starvation and disease followed each major hurricane. Lack of shelter exposed both colonists and their slaves to the bare elements, and lack of food led to starvation, which naturally lowered their resistance to diseases such as malaria. Over 5,000 people died after a storm in 1781, 20 percent of those from starvation and disease in the following weeks. Making things worse, storm surges contaminated wells with saltwater. Hurricanes exacerbated problems with life on a plantation, left Caribbean slaves frequently malnourished, and lowered their life expectancy.

Hurricanes changed the social order on the islands by inadvertently helping to create a system of large plantations. Many small landowners who lost their investments in the storms emigrated, and over time, the planters who remained behind consolidated these smaller parcels of land into large plantations. Some planters then chose to leave the region during hurricane season, appointing overseers in their place. Mulcahy argued that hurricanes literally changed the landscape of British colonial society and “destroyed the symbolic markers of English culture and social order” by sweeping away objects such as fences, walls, and homes. Fences and land clearance were the foundation of European claims to land in the New World, since they believed that unimproved land had no owner. It was on that basis that they relegated native peoples to the background and placed them “in nature.” Hurricanes, however, tore down those fences and improvements, plunging the colonists into a “state of nature” on par with the natives.

Hurricanes also significantly disrupted the economy in the British Greater Caribbean. In terms of raw goods, crop loss drove up prices and increased demand for provisions and building materials imported from outside the colonies. Sugar and rice plantations were particularly hard hit. Hurricanes spoiled the fields themselves, contaminated them with salt water, and often struck just before harvest time, destroying a fully mature crop. Windmills, boiling houses, and curing houses were also routinely damaged. One hurricane that struck Barbados in 1780 caused a total of over $1.3 million in damages and lost crops. 6,606 head of cattle were killed. Hurricanes destroyed ships, docks, forts, and ports, and forced traders to adjust their schedules around hurricane season to avoid losses. The destruction of forts and weapons made some settlements more vulnerable to looting and attacks by pirates.

Terrifying, swift, and devastating, hurricanes negatively affected every aspect of life in the British Greater Caribbean. What is amazing, however, was how the colonists were able to pull together and prosper, year after year, in spite of the devastation caused by these storms. Through Matthew Mulcahy’s meticulous research, it became clear that hurricanes, with all their power, could bend but not break the British colonial system.