There is a duality in American popular culture. On one hand, we idealize modern domestic life as safe, comfortable, and technologically advanced. On the other, we are aware that we’ve been unable to fully conquer our baser instincts. Writers and filmmakers often express this duality by criticizing a symbol of postwar American progress: the suburb. Carefully manicured lawns, safe neighborhoods, state of the art technology (for both security and cleanliness), and a car in every garage hold the promise of uninterrupted domestic bliss.

Yet the morning newspaper carries daily reminders that all is not right with the world. Despite ideal physical surroundings, dark human impulses remain. Murder, lust, betrayal, jealousy, and madness rear their ugly heads. Both the film American Beauty (1999) and the television series Desperate Housewives (2004-2012) tapped into this sentiment and portrayed the Janice-faced suburbs as a deceptively dangerous place.

While suburbs have technically existed for hundreds of years, the dramatic growth in modern suburbs began in the late nineteenth century as a consequence of rural residents moving to urban centers. As cities become overcrowded and began to experience high crime rates, congestion, and unsanitary conditions, the middle class sought refuge in nearby planned communities. These housing developments were meant to alleviate crowding, crime, and other inner city problems through strict zoning laws and community standards. Economic growth after World War 2  made it possible for millions of people to buy homes and seek out the “American dream” in the suburbs.

TV shows like Leave it to Beaver (1957-1963), The Brady Bunch (1969-1974), and Family Ties (1982-1989) portrayed the suburbs as largely idyllic and ideal for domestic family life. Pretty moms and wise, handsome dads taught lessons and safely guided their children to adulthood. Not everyone agreed with this portrayal, however. Ira Levin’s 1972 novel The Stepford Wives suggested suburban tranquility and conformity had a dark underside. Both the film American Beauty and the television series Desperate Housewives further capitalized on this sentiment.

American Beauty stars Kevin Spacey and Annette Bening as Lester and Carolyn Burnham, who live with their teenage daughter Jane (played by Thora Birch) in a Leave it to Beaver-esque suburb. Their neighbors are a clean cut gay couple and a Marine Corps veteran, Frank Fitts, his wife, and son Ricky. All is not what it seems, however. Under the surface, the Burnhams are a deeply troubled and unhappy family, and authoritarian father Frank Fitts is a homophobe who is secretly attracted to men. His son is a social outcast and drug dealer. To escape their problems, Lester Burnham fetishizes his daughter’s friend, Angela, and Carolyn begins having an affair. While Carolyn desperately tries to maintain a facade of success and normalcy, Lester gives up to pursue his own interests. In the end, it’s implied Frank Fitts shoots and kills Lester after finally revealing his homosexual inclinations.

In one scene, Lester and Carolyn Burnham are home alone when long-buried passions bubble to the surface. Lester slowly moves in to kiss his wife’s neck while remembering why they fell in love. Just before the intimacy becomes physical, Carolyn notices he is about to spill beer on the couch. She snaps out of her trance to warn him, which ruins the moment. They begin arguing over the couch’s value. Carolyn takes the side of the material over the moment, and Lester replies violently, “It’s just a couch! This isn’t life. It’s just stuff.” The message is clear: in Carolyn’s mind, to preserve domestic tranquility, order, and cleanliness in the home, passion must not be allowed to cross the threshold. In a sense, she is proven right. Lester, who gradually becomes a kind of pathetic Byronic hero, is ultimately destroyed by forces he unleashed in his quest to free himself from the shackles of mundane conformity. 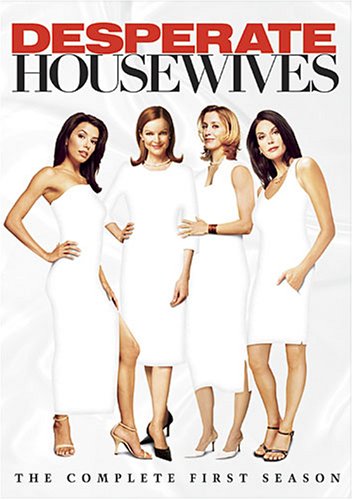 Desperate Housewives follows five women,  Susan Mayer (Teri Hatcher), Lynette Scavo (Felicity Huffman), Bree Van de Kamp (Marcia Cross), and Gabrielle Solis (Eva Longoria), living in a picturesque subdivision called Wisteria Lane. In the pilot episode, their seemingly happy friend Mary Alice Young commits suicide, and season one is devoted to solving that mystery. Along the way, each character attempts to keep dark secrets from the others in order to maintain the appearance of domestic bliss, but one by one, the characters’ personal failings undermine their seemingly perfect lives. The housewives’ behavior reinforces the notion that the appearance of happiness is more important than actually being happy.

Mary Alice Young, the ideal housewife, killed herself to prevent just such a secret from being exposed. The final episode of Season One revealed that her husband and she murdered a recovering drug addict, dismembered her, and buried her body under the pool in order to prevent her from revealing that she sold her infant son to them years earlier. On the surface, they were a happy, healthy, beautiful, and wealthy family, and they were willing to commit a horrible crime to maintain that illusion.

A contrast between appearance and reality is characteristic of these dramatic critiques of suburbia. They reject the entire premise of the suburban planned community–that a carefully designed and managed residential zone will produce a perfect environment for domestic bliss. Critics argue this environment is somehow fake or inauthentic and the continuing problems experienced by its residents are somehow more real or authentic. In short, shocking crimes and dark secrets expose suburban utopia as fraudulent.

That human nature is most authentically expressed in crime, unrestrained passion,  and the grotesque is characteristic of Dark Romanticism, a subgenre of Romanticism that gave rise to the American Gothic movement. American Gothic arose in opposition to Transcendentalism, which argued that humanity is perfectible. Thus, American Beauty and Desperate Housewives are both quintessential American Gothic tales. Their horror is subtle, but it comes from realizing that domestic tranquility is an illusion–your neighbors, your wife, your husband, even your own children might be plotting to harm you. Shocking crimes ripped from the headlines reinforce this dread, and such real-life events fuel creative backlash against suburbia.

Like the 1989 dark comedy The ‘Burbs, true crimes partly inspired both American Beauty and Desperate Housewives. Writer Alan Ball started American Beauty as a play while engrossed in the 1992 Amy Fisher trial. Amy Fisher, dubbed the “Long Island Lolita,” shot her lover’s wife in a fit of jealousy. Fisher, 17 at the time, was allegedly having an affair with then 35-year-old Joey Buttafuoco. This influence can be seen in the fictional obsession Lester Burnham has with the Lolitaesque Angela. Creator Marc Cherry got the idea for Desperate Housewives after watching a news report on Andrea Yates. Yates, a real-life “desperate housewife,” drowned her five children in 2001 after suffering from postpartum depression. In the first instance, a respected family man carried out a secret affair with an underage girl. In the second, a woman with a seemingly blessed family life committed an unspeakable crime against it.

American Gothic tales also frequently contain supernatural themes, and though subtle, there is a supernatural element to American Beauty and Desperate Housewives: both are narrated by a ghost. In American Beauty, Lester Burnham’s disembodied voice explains to the audience what has happened and reassures them he has found a new perspective on life. In Desperate Housewives, Mary Alice Young acts as an omniscient narrator, teasing the audience with revelations about the other housewives. In death, both Mary and Lester are finally happy and carefree. The conclusion is dark but unavoidable: these soothing voices from beyond the grave reassure the audience that the only escape from the hypocrisy, lies, loneliness, and empty materialism of suburbia is death.

Using a contemporary suburban setting, both American Beauty and Desperate Housewives make a quintessentially Dark Romantic argument against Transcendentalism: that human fallibility and proneness to sin and self destruction will always undermine our attempts at perfection.

One reply on “What’s Wrong with the Suburbs? American Beauty and Desperate Housewives As Gothic Tales”

[…] In opposition to TV shows like Leave it to Beaver, both Eerie, Indiana and The X-Files portray the suburbs as a place of denial–denial of danger and the human passions that cause it, where the normal obscures the abnormal through supernatural means. The artificial order and safety of the suburbs only serves to mask the sinister reality lurking beneath the surface. No one is safe from life’s horrors, not even in the carefully controlled environment of suburbia.  Eerie, Indiana and The X-Files eloquently brought this argument to television audiences, paving the way for popular shows like Desperate Housewives. […]