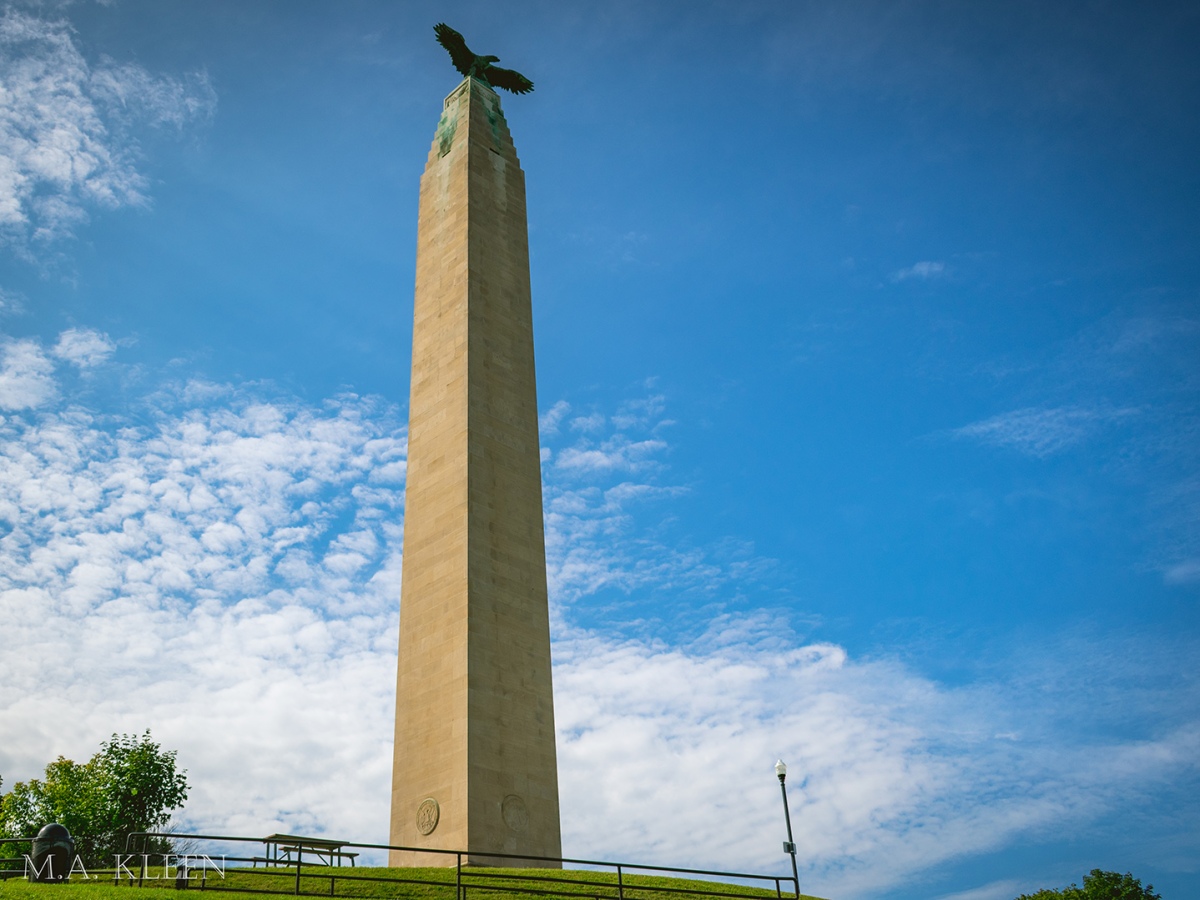 This decisive naval battle on Lake Champlain is celebrated as a pivotal moment in the War of 1812. A large monument towers over Plattsburgh, New York, where you can look out over the water and imagine the old wooden sailing ships locked in deadly combat.

The Battle of Plattsburgh was fought from September 6 to Sept. 11, 1814 between British forces commanded by Lieutenant General Sir George Prévost and Captain George Downie and American forces commanded by Brigadier General Alexander Macomb and Master Commandant Thomas Macdonough on Lake Champlain and Plattsburgh, New York during the War of 1812. The battle was a major American victory. It stopped the British invasion of New York and led to denial of British territorial demands in the Treaty of Ghent.

In late summer 1814, the British planned to conduct a combined land and naval campaign down Lake Champlain, which had it succeeded, would have drastically altered the balance of power in the region. They gathered approximately 11,000 men and a fleet of four ships and 12 gunboats for the expedition. Opposing them were approximately 6,000 American regulars and militia and four ships and ten gunboats.

Brig. Gen. Alexander Macomb decided to make his stand at Plattsburgh, and sent troops north to harass the British as they advanced. Plattsburgh Bay allowed Commandant Macdonough’s ships to engage the British at close range, where the British would lose the advantage of their long-range guns. On the morning of September 11, the British ships HMS Chubb, HMS Linnet, HMS Confiance, and HMS Finch engaged the American ships USS Eagle, USS Saratoga, USS Ticonderoga, and USS Preble.

END_OF_DOCUMENT_TOKEN_TO_BE_REPLACED

A roadside sign marks this little-known naval battle on Lake Champlain, which delayed the British advance for months and allowed American colonists time to rebuild their forces and eventually win the Battle of Saratoga.

Roads in Northern New York were too primitive in the eighteenth century to move large numbers of troops and supplies by land, so control of Lake Champlain was key to gaining access to the Hudson Valley. Controlling this corridor was key to the British plan for linking their forces in Canada with those in New York City, severing New England from the rest of the colonies.

The Americans cobbled together 16 vessels to oppose a naval invasion. Benedict Arnold had experience as a ship captain, so he was put in charge of the American fleet. In August 1776, he sailed to the northern end of the lake, where he encountered a much larger British fleet. On September 30, he retreated to Valcour Island with 15 ships, while one left to be resupplied. On October 11, a British fleet of 5 ships and 22 gunboats appeared north of the island and sailed south to cut off the American’s retreat.

END_OF_DOCUMENT_TOKEN_TO_BE_REPLACED

Ambrosia Diner, at 518 Aviation Road in Queensbury, New York, opened off I-87 Exit 19 in 2012. It is a DeRaffele model, owned by Dennis and Robert Pilarinos, who also own several other diners in the area, including Capital City Diner in Albany. It is rumored to have heated sidewalks! I love the stainless steel on the exterior and retro design. 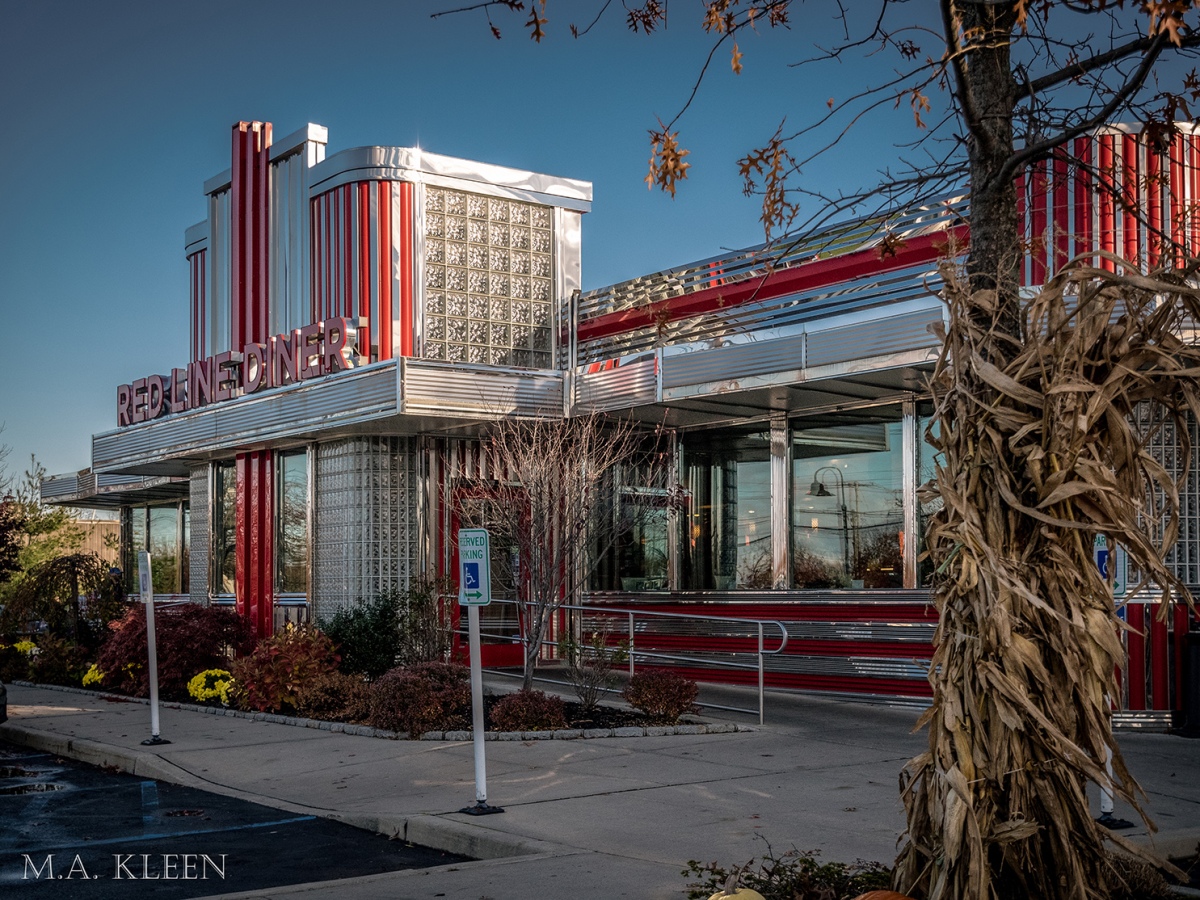 Red Line Diner, at 588 U.S. Route 9 (off I-84) in Fishkill, New York, is a DeRaffele model owned by the Vanikiotis Group. It’s become a local favorite since opening in 2012 and is marketed as a healthier alternative to typical diner fare. Its doors are open 24/7 and the red and stainless steel exterior is sharp. 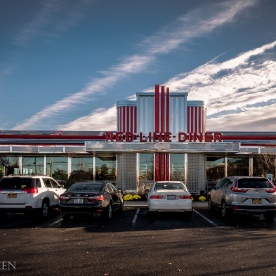 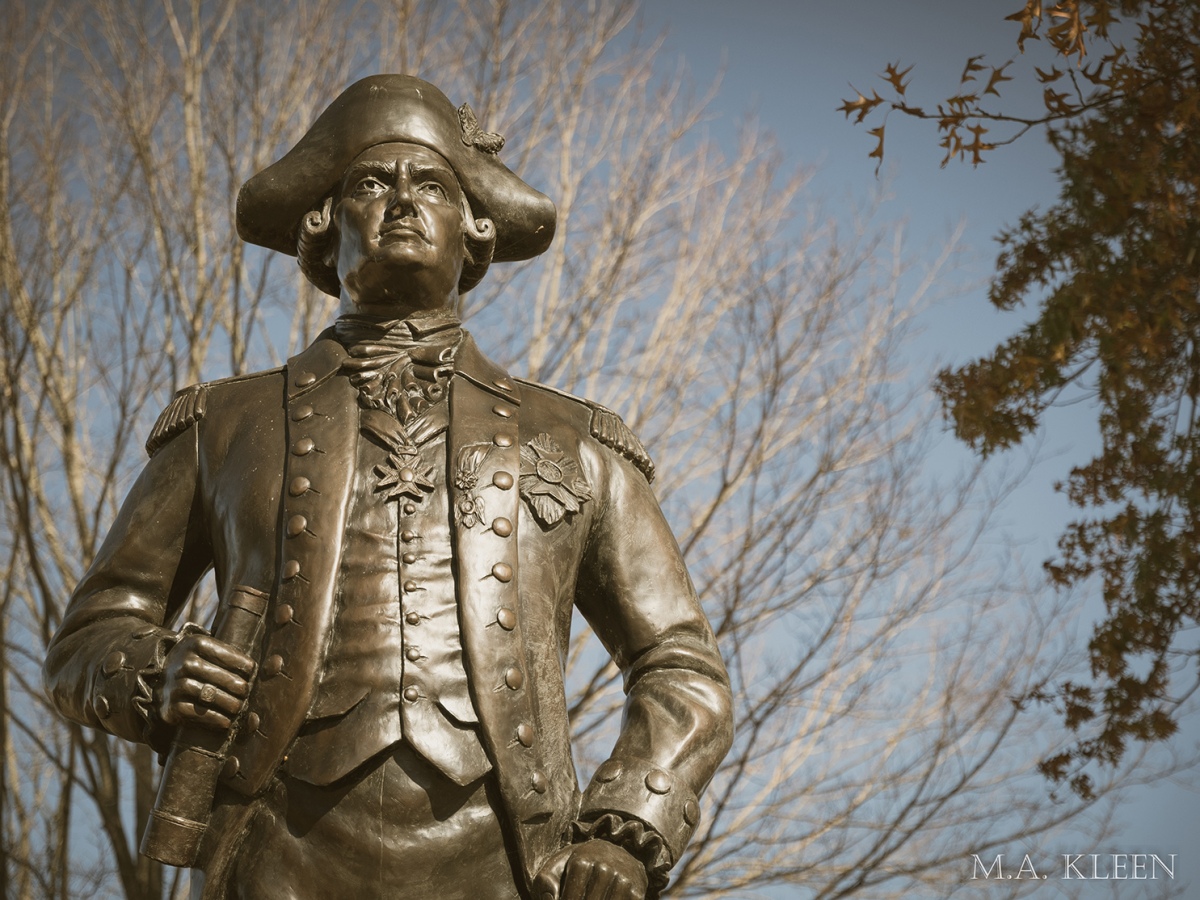 In 1778, two armies slugged it out in sweltering heat in these east-central New Jersey fields. Though technically a draw, the Continental Army showed it could finally stand toe-to-toe with the best soldiers in the British Army.

The Battle of Monmouth Court House was fought on June 28, 1778 between American forces commanded by General George Washington and Major Generals Nathanael Greene, William Lord Stirling Alexander, Charles Lee, and Marquis de Lafayette and British forces commanded by Lt. Gen. Charles Cornwallis and Lt. Gen. Baron Wilhelm von Knyphausen near Freehold, New Jersey during the American Revolutionary War. The battle was a tactical draw, with both sides exhausted after fighting the longest battle of the war in brutal heat.

After France’s entry into the war on the American side, British Lt. Gen. Sir Henry Clinton withdrew his army from Philadelphia and retreated toward New York City, which was under British control. He sent several thousand Tory volunteers and most of his supplies down the Delaware River, while his remaining 10,000-man army marched overland. General Washington’s 12,000-man army caught up with them at Monmouth Court House.

Washington sent Maj. Gen. Charles Lee and Marquis de Lafayette forward with 5,000 men to attack Clinton’s 1,500-man rearguard. When Clinton turned Maj. Gen. Cornwallis’ forces around to strike Lee’s left flank, the Americans broke and withdrew in confusion. Just then, General Washington arrived ahead of the rest of his army and sharply rebuked Lee. He cobbled together a defensive line, but that also broke under relentless British attacks. Washington’s third line held.

END_OF_DOCUMENT_TOKEN_TO_BE_REPLACED 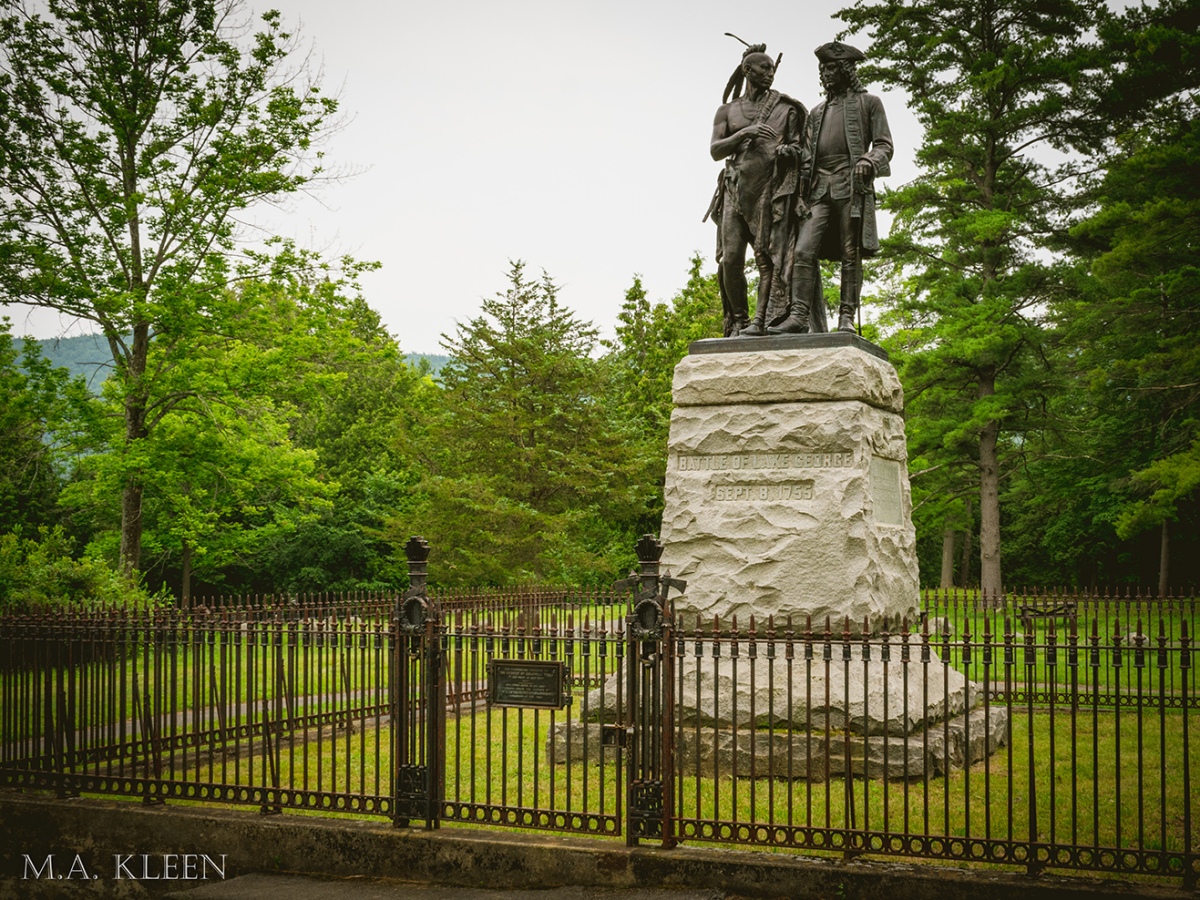 Visitors to beautiful Lake George, New York can camp and hike on a 264-year-old battlefield and see the ruins of old British and American forts.

The Battle of Lake George was fought on September 8, 1755 between French forces under the command of Jean Erdman, Baron Dieskau and British forces under the command of Sir William Johnson and their American Indian allies commanded by Chief Hendrick Theyanoguin at the southern tip of Lake George, New York during the French and Indian War. The battle ended in British and Iroquois victory over the French, and the building of Fort William Henry.

In early September 1755, Sir William Johnson marched north from Fort Edward intending to capture the French Fort St. Frédéric at Crown Point on the western shore of Lake Champlain. Around the same time, Baron Dieskau took 222 French regulars, 600 French-Canadian militia, and 700 Mohawk allies and moved south with the aim of destroying Johnson’s base of supplies at Fort Edward. While camped on Lake George’s southern shore, Johnson learned of the French movement and sent 1,000 Colonial militia and 200 Mohawk allies to reinforce the fort.

In what became known as the “Bloody Morning Scout,” Baron Dieskau ambushed the British relief column and inflicted heavy casualties, however, the British and Mohawk warriors were able to inflict equally heavy losses on the French during their fighting retreat back to camp. Both sides lost experienced officers in the engagement. When French forces reached Johnson’s camp, the militia and their Indian allies refused to attack because the British had erected makeshift fortifications.