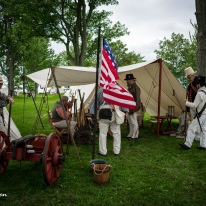 Sackets Harbor was a principal port and shipbuilding yard for the upper St. Lawrence River Valley and Lake Ontario during the War of 1812. The British wanted to take advantage of the American fleet’s absence to seize and destroy the shipyard and supplies at Sackets Harbor.

American forces put up a tenacious defense on land and eventually drove the British away. Thirty British soldiers were killed, 200 wounded, and 35 taken prisoner in the attack. The Americans sustained 157 casualties, including 26 missing or captured.

The battle reenactment took place on a portion of the actual battlefield and attracted a variety of reenactors from across the United States and Canada.

END_OF_DOCUMENT_TOKEN_TO_BE_REPLACED

The Battle of Cranberry Creek was a small but dramatic part of the War of 1812 in Upstate New York. Southeast of Alexandria Bay, Cranberry Creek flows into a branch of the St. Lawrence River leading into Goose Bay.

The St. Lawrence River, as the border between the United States and British Canada, was a vital waterway that saw dozens of naval battles as each side sought to control it. Both sides attacked vulnerable supply shipments being ferried up and down the river.

In late July 1813, the American Navy learned that several British bateaux loaded with munitions, salt pork, pilot bread, and other supplies, escorted by the Spit Fire, were bound up-river for Fort Henry at Kingston, Ontario.

Two privately-armed schooners, the Neptune and Fox, were dispatched from the naval base at Sackets Harbor to intercept them. Major Dimoch of the Forsyth Rifles commanded approximately 72 riflemen and militia on board.

END_OF_DOCUMENT_TOKEN_TO_BE_REPLACED 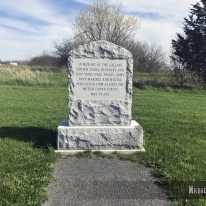 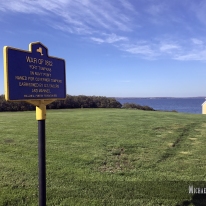 At the outbreak of the War of 1812, the United States had only one warship in Lake Ontario, so it had to repurpose civilian vessels for military use. Sackets Harbor, New York became a principal port and shipbuilding yard for the upper St. Lawrence River Valley and Lake Ontario. The U.S. built several forts to protect the harbor, including forts Tompkins, Pike, Volunteer, Kentucky, Virginia, and Chauncey. In the First Battle of Sackets Harbor, July 19, 1812, American cannons on shore chased away five British ships pursuing a merchant vessel, severely damaging the British flagship Royal George.

In late May 1813, the American fleet was preoccupied at Fort George, near the mouth of the Niagara River. The British took advantage of its absence and attempted to seize and destroy the shipyard and supplies at Sackets Harbor. Captain James Lucas Yeo took six ships (with a total of 700 crew and 98 cannon) and approximately 870 men, consisting of a grenadier company from the 100th Regiment, two companies of the 8th Regiment of Foot, four companies of the 104th Regiment, one company of the Glengarry Light Infantry, two companies of the Canadian Voltigeurs, and a detachment of Royal Artillery with two 6-pounder guns, and sailed south. Approximately 37-40 American Indian warriors accompanied them.

On May 28, the British intercepted 12 small boats carrying reinforcements from the 9th and 21st U.S. Regiments from Oswego to Sackets Harbor in Henderson Bay. They landed at a rocky outcropping called Stoney Point and fled into the wilderness, only to be overtaken by hostile American Indians. The 9th and 21st were virtually destroyed, losing 35 men. The remaining 115 surrendered. Only seven men escaped and made it back to Sackets Harbor.

END_OF_DOCUMENT_TOKEN_TO_BE_REPLACED

An unfinished castle wins the hearts of visitors to New York’s Thousand Islands region each year, but its sad history continues to linger.

The stone walls of a majestic castle rise above the waters of the Saint Lawrence River, creating a romantic visage on tiny Heart Island. Today a major tourist destination, for decades the structure sat abandoned to vandalism and decay. Despite never having been lived in, rumors of Boldt Castle’s haunted halls have spread throughout the Thousand Islands Region of Upstate New York.

In 1900, George Boldt, general manager of the Waldorf-Astoria Hotel in New York City and manager of the Bellevue-Stratford Hotel in Philadelphia, began construction on this six story, 120 room castle. It was to be a grand tribute to the love of his life, Louise Kehrer Boldt. Louise purchased Heart Island, where the castle was to be built, in 1895 for $1. The architectural firm G. W. & W. D. Hewitt designed the castle, for which Boldt spared no expense. It contained tunnels, a powerhouse, Italian gardens, drawbridge, alster tower, and a dove cote.

END_OF_DOCUMENT_TOKEN_TO_BE_REPLACED 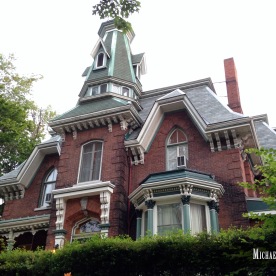 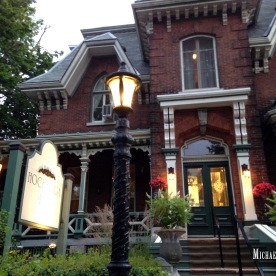 A woman dressed in black is believed to wander the halls of this beautiful French Victorian-style bed & breakfast.

This charming 21-room French Victorian Mansion is located at 24 Sydenham Street in the historic Sydenham District, just a few blocks from Queens University in Kingston, Ontario. It operates year-round as an upscale bed and breakfast. Guests come for more than relaxing evenings, however. The Hochelaga Inn is widely believed to be haunted by several ghosts, including a woman in black and a spectral child.

John and Harriet McIntyre built this home in 1879. Harriet was a relative of Sir John Alexander Macdonald. Macdonald, renowned for his drinking and public corruption, was the first Prime Minister of Canada. After John McIntyre died, the Hochelaga Foundation, a branch of the Bank of Montreal, purchased the inn to house its traveling employees. The stables were located behind the mansion, where the carports are today.