The spirit of Tudor England comes alive at the Mid-Atlantic’s most popular Ren fair.

History and magic comes alive outside Annapolis at the Maryland Renaissance Festival, where a huge crowd turned out for Celtic Day last weekend. I was impressed! Jousting and chariot fights were the highlight of the day, but a menagerie of performers kept fair goers entertained throughout the day.

Welcome to Revel Grove, Oxfordshire, England in the year 1532. King Henry VIII and his mistress Anne Boleyn visit the village as part of their annual summer progress. I didn’t see much of the King and his court, but it’s possible they blended in with the costumed crowd. Visitors were deeply committed to getting into the spirit of the fair.

Rides on a colorfully-painted elephant were one of many amazing experiences for children. The Maryland Renaissance Festival is thoroughly family-friendly, with a huge play area for kids. What a great way to spark children’s imaginations!

END_OF_DOCUMENT_TOKEN_TO_BE_REPLACED 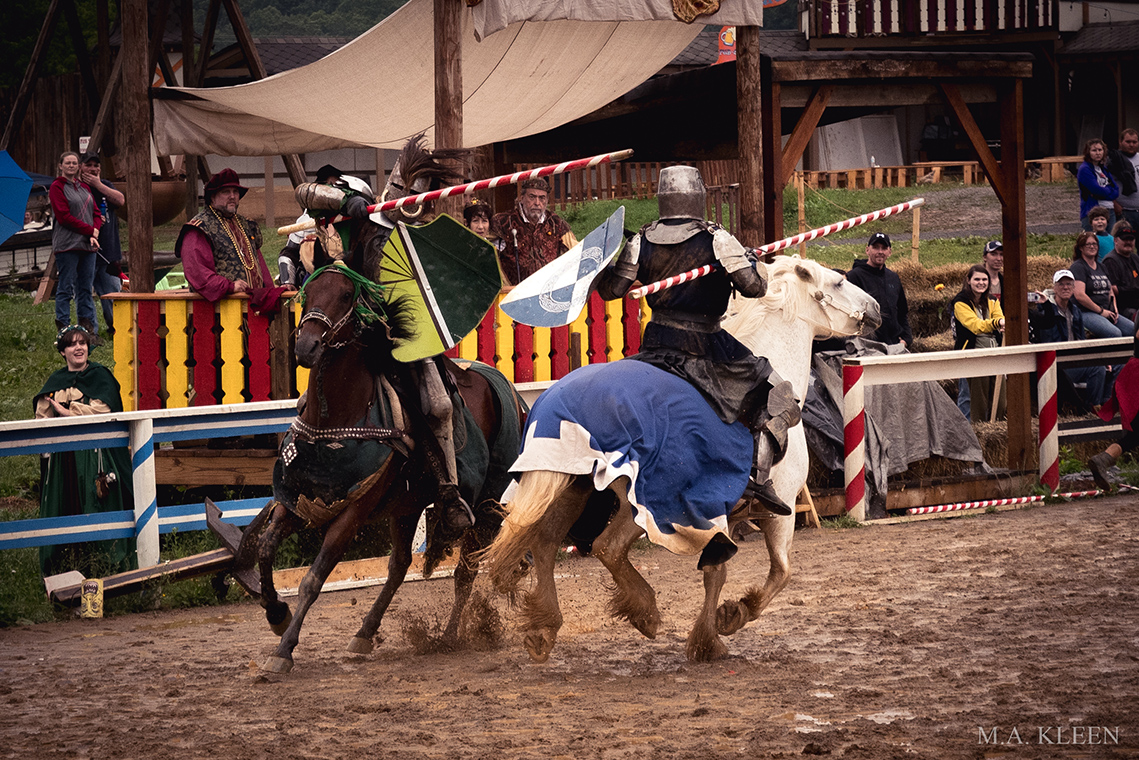 The West Virginia Renaissance Festival is back for a second season! Taso Stavrakis and Dawn Kieninger first opened the festival in 2018, and were undeterred even after a fire destroyed a large Elizabethan-style barn earlier this year. The festival kicked off this past Saturday, June 8th, and will run every weekend in June.

My weather app assured me the rain would stop before I arrived, but when the gates opened at 11am, a steady drizzle still threatened to ruin the fun. Rain already turned the dirt roads at Hollow Hills Farm to mud. Thankfully, this wasn’t enough to deter the festival’s dedicated actors and actresses from performing.

The popular Washing Well Wenches put on a wet and sloppy vaudeville act with plenty of audience participation. These hilarious ladies are just two of many troop members who perform at Ren fairs all over the country.

END_OF_DOCUMENT_TOKEN_TO_BE_REPLACED

Jousting, comedy, and merriment at this slice of Elizabethan England in the American South

Only open for a limited time in early summer, this classic Ren fair has all the charm of its counterparts without all the crowds. Hosted annually at Lake Anna Winery, 5621 Courthouse Road in Spotsylvania Courthouse, Virginia, the Virginia Renaissance Faire is open for five weekends, May 11th through June 9, 2019.

Journey to the fictional village of Staffordshire, where the regal queen and her court will grace the lowly peasants with her presence. Entertainment, food, dancing, and sport re-creates the spirit of Merry England.

END_OF_DOCUMENT_TOKEN_TO_BE_REPLACED

An ensemble cast of talented comedians isn’t enough to save this poorly executed dark comedy lampooning scandalous behavior in the Catholic Church.

This isn’t the first time in history the Catholic Church has faced criticism for corruption and sexual impropriety, and The Little Hours (2017), written and directed by Jeff Baena, wants to remind us of that. Inspired by a fourteenth century Italian satire, this film’s poor quality and lackluster performances landed dead on arrival, missing an opportunity to successfully reboot a classic tale for contemporary audiences.

At an Italian convent run by Sister Maria (Molly Shannon), three young nuns, Alessandra (Alison Brie), Ginevra (Kate Micucci), and Fernanda (Aubrey Plaza), are bored with their daily monotony and harass the elderly gardener into quitting. Meanwhile, Lord Bruno (Nick Offerman) discovers a servant named Massetto (Dave Franco) is having an affair with his wife. Massetto flees for his life, and runs into Father Tommasso (John C. Reilly), who got drunk and lost the convent’s embroidery on his way to the market.

Eager for a friend, Father Tommasso convinces Massetto to return to the convent and work as their new gardener, where he will pretend to be a deaf-mute to avoid being harassed by the sisters. Things get complicated when Alessandra, Ginevra, and Fernanda all scheme for Massetto’s affection. Is Fernanda’s strange behavior just repressed desire bubbling to the surface, or is something more sinister afoot?

The Little Hours is based on stories from The Decameron (c.1353) by Giovanni Boccaccio, an Italian Renaissance humanist. As English writer Geoffrey Chaucer did for his own country in The Canterbury Tales (c.1400), Decameron satirized life in the Late Medieval Italian states through a series of short stories told by various narrators. The Little Hours takes elements from Day Three, particularly stories one and two.

END_OF_DOCUMENT_TOKEN_TO_BE_REPLACED

This Netflix film praised for its historical accuracy is missing that essential ingredient to make it great.

Robert the Bruce’s fourteenth-century rebellion against England is cinematically recounted in this Netflix feature that tries to cram as much history as possible in 121 minutes. Directed by David Mackenzie, Outlaw King (2018) brings to life all the intrigue and violence of late medieval feudalism. Though the film comes across as authentic and makes a genuine effort to get the history right, it lacks some essential ingredients to break into the top tier.

Things get complicated when Robert’s father dies, and Robert is left competing with Lord Comyn for the Scottish throne. When Robert learns King Edward I executed William Wallace, he senses an opportunity to renew the rebellion. Lord Comyn wants to remain loyal to England, so Robert brutally murders him in a church and then gathers an army. Unfortunately, Aymer de Valence has also remained loyal to England, ambushes Robert’s army in a forest, and destroys it.

Robert and a few companions are forced to flee. He sends his wife and daughter into hiding, where Edward, Prince of Wales captures them and brutally murders Robert’s brother. Robert decides to fight a guerilla war, culminating in the Battle of Loudoun Hill, where Robert uses the boggy terrain and clever tactics to his advantage. He defeats the English army and humiliates the Prince of Wales, who is revealed to be a miserable coward. Robert and Elizabeth are reunited and live happily ever after.