During the Revolutionary War, New York’s Hudson River Valley was the scene of numerous battles as both sides sought to control this vital waterway.

Before automobiles and paved roads, rivers were the highways of their day. Whoever controlled a major river could ferry troops and supplies back and forth over hundreds of miles. Control of the Hudson River in eastern New York was critical to British plans early in the Revolutionary War, but Patriots blocked passage by spanning the river with large iron chains at a narrow point near Bear Mountain.

After being pushed out of New York City in 1776, Gen. George Washington established his headquarters in Peekskill along the Hudson River. He considered the area critical for keeping the Continental Army supplied. Numerous battles and skirmishes were fought for control over this vital waterway.

The Battle of White Plains was fought on October 28, 1776 during George Washington’s retreat from New York City. Washington positioned his depleted Continental Army on hills near White Plains, New York, east of the Hudson River. He established 3-mile long defensive positions, including two lines of earthworks, anchored by swampy land near the Bronx River on one flank and Chatterton’s Hill on the other.

END_OF_DOCUMENT_TOKEN_TO_BE_REPLACED

Headstone for Lt. Elam S. P. Clapp (1842-1864) in Oakwood Cemetery, 50 101st Street, Troy, Rensselaer County, New York. Lt. Clapp led Company A, 125th NY Volunteer Infantry, in the 3rd Brigade, First Division, II Corps, Union Army of the Potomac, at the attack on the “Mule Shoe” on March 12, 1864 during the Battle of Spotsylvania Court House. Fighting there was some of the most desperate and bloody of the war. The regiment’s commander, Capt. E. P. Jones, was killed, and Lt. Clapp was mortally wounded. This 300-acre cemetery was established in 1848 and designed in rural style. It offers a beautiful view of the Hudson Valley and contains the remains of over 16,000 people, including Samuel “Uncle Sam” Wilson.

There’s nothing more American than a classic diner, and New York’s Hudson Valley has more than its fair share.

The Hudson River flows in more or less a straight line 315 miles through eastern New York from the Adirondack Mountains to the Atlantic Ocean. In southeastern New York, the Hudson Valley has fostered its own sense of culture and community. The classic American diner is part and parcel of that culture, and the Hudson Valley has many fine examples of diners both historic and modern.

Situated on Peekskill Bay on the Hudson River’s east bank, Peekskill is a small river town with a modern downtown. The Center Diner, opened in 1939 on Bank Street off Route 202 (Main Street), is a classic greasy spoon wedged between an alley and a plasma center. It is a rare National Diner.

END_OF_DOCUMENT_TOKEN_TO_BE_REPLACED

A daring attack by outnumbered colonials routs a British raid, while a blue cloak captured in the skirmish later provided material for a U.S. flag flying above Fort Stanwix.

After being pushed out of New York City in 1776, George Washington established his headquarters in Peekskill along the Hudson River. He considered the area critical for keeping the Continental Army supplied. The British were well-aware, and in late March 1777, 500 British troops sailed up the Hudson River to raid Patriot farms and burn supplies. They landed at Peekskill Bay on March 23 and began pummeling Brig. Gen. Alexander McDougall‘s 250-man force on Fort Hill with artillery.

The following day, a force of 200 British troops marched northeast toward the Van Cortlandt family manor and began pillaging. Some became separated from the main body. Sensing an opportunity, Lt. Col. Marinus Willett, newly arrived with his 80-man detachment, persuaded McDougall to allow him to attack. His men fixed bayonets and charged the unsuspecting British raiders as the sun disappeared behind the horizon.

END_OF_DOCUMENT_TOKEN_TO_BE_REPLACED

A roadside marker, quietly removed from its original location, is all that remains to mark the location of this Revolutionary War skirmish.

The Battle of Young’s House was fought on February 3, 1780 between American patriot forces commanded by Lt. Col. Joseph Thompson and British and Hessian forces commanded by Lt. Col. Chapple Norton in Westchester County, New York during the American Revolutionary War. The battle was a disaster for the Americans: their outpost was destroyed and nearly every combatant was killed, wounded, or captured.

This area of New York was considered a “no man’s land” between British occupied New York City and Long Island and Patriot forces in Upstate New York. Joseph Young’s stone house and barn became a fortified camp for the opposing sides. It was occupied by Continental Army forces in 1776, the British in 1778, and the Continental Army again in 1779. The winter of 1779-1780 was brutally cold, and frozen waterways left New York City vulnerable to attack. The British decided to harass Patriot outposts to deter any offensive.

Lt. Col. Joseph Thompson and a contingent of 250 men from Massachusetts regiments garrisoned Young’s property, waiting in the harsh snow to be relieved by another unit. Unfortunately, a mixed British force of approximately 550 men, including 100 cavalry, led by Lt. Col. Chapple Norton marched north to seize their outpost.

END_OF_DOCUMENT_TOKEN_TO_BE_REPLACED

Yankee Clipper Diner, at 397 Main Street in Beacon, New York, is a 1998 Paramount model named after the Pan American B-314 Yankee Clipper airplane that flew mail across the mid-Atlantic beginning in 1939. The original diner was an O’Mahony that opened in 1946 and was a location in the film Nobody’s Fool (1994) starring Paul Newman. It has been owned and operated since 2003 by two sisters and their husbands, Nikos and Katina Pertesis and Petros and Tonia Petsas. Their Yankee French Toast with strawberry cream cheese is so good. 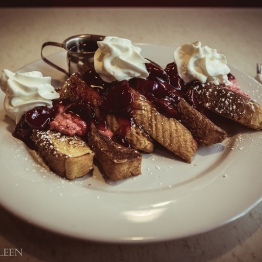 Ambrosia Diner, at 518 Aviation Road in Queensbury, New York, opened off I-87 Exit 19 in 2012. It is a DeRaffele model, owned by Dennis and Robert Pilarinos, who also own several other diners in the area, including Capital City Diner in Albany. It is rumored to have heated sidewalks! I love the stainless steel on the exterior and retro design.