You would be wrong if you thought nothing more could be written about Chicago ghostlore. Chicago Haunted Handbook: 99 Ghostly Places You Can Visit in and Around the Windy City (2013) by Jeff Morris and Vince Sheilds discovered new gems among well-worn territory. Though a little dated at this point, it still offers enough tales to delight readers.

Published by Clerisy Press, Chicago Haunted Handbook is part of the “America’s Haunted Road Trip” series. At 226 pages and with a retail price of $15.95, this book invites you to, “Join in Chicago’s Grandest Ghost Hunt.” It features 99 haunted places, along with four “places that didn’t quite make the book.” The locations are divided into five sections: Cemeteries; Bars and Restaurants; Roads and Bridges; Parks; and Museums, Theaters, Hotels, and other Buildings.

The authors are an unlikely pair. Jeff Morris, from Cincinnati, Ohio, is an experienced author with several titles under his belt. Vince Sheilds was born in Elgin in 1984 and moved to Chicago in 2006, where he formed the Chicago Paranormal Investigators.

I’ve read just about every book on Illinois ghostlore, so I look at them with a discerning eye. Chicago Haunted Handbook has several good qualities that make it worth owning. First, it features several locations seldom covered by other books. The old Huntley Grease Factory is my favorite, but the Polish Museum of America, Joliet Potter’s Field, Tyrell Road Cemetery, and The Drinkingbird, are all relatively new.

Second, the book contains an appendix of day tripping “mini tours.” Each features a couple of different stops (or days), with a different location for each stop. There is even a haunted pub crawl and a gangster tour. I enjoy extras like this, especially since it allows you to explore these places at your own pace (as opposed to going on a bus tour).

END_OF_DOCUMENT_TOKEN_TO_BE_REPLACED

Designed by Albin Polasek, former head of the Art Institute of Chicago’s sculpture department, “Mother” depicts a woman sheltering two children, while her young boy holds an upright torch. It stands outside a Renaissance Revival-style crematorium and columbarium in Bohemian National Cemetery, at 5255 N. Pulaski Road in Chicago, Illinois, and was erected in 1927. Polasek also designed another bronze sculpture in this cemetery called “The Pilgrim.”

Bohemian National Cemetery, at 5255 N. Pulaski Road in Chicago, Illinois, was created in 1877 by Chicago’s ethnic Czech community, and has since expanded to 126 acres. Approximately 120,000 of the city’s former residents are buried here, including victims of the SS Eastland shipwreck. It was added to the National Register of Historic Places in 2006.

Erected in 1892, this bronze statue of a private in the Union Army holding an American flag is dedicated to the 18 Civil War veterans buried in Bohemian National Cemetery. It was designed by sculptor Joseph Klir and called the Bohemian Soldiers’ and Sailors’ Monument. Its inscription reads “Pro Novou Vlast”, or “for the new country”. Like many immigrant groups, Czechs fought on both sides, though primarily for the North.

This beautiful neoclassical granite statue of a cloaked woman is a tribute to Vincencie Kropacek (1863-1944) and her husband, Jan Kropacek (1860-1906). The woman stands next to a pedestal with a vase or urn. She appears to be holding reeds or palms in her right hand.

END_OF_DOCUMENT_TOKEN_TO_BE_REPLACED

The strange case of Mary Vogel and Augusta Wilke is a fascinating glimpse into a WW1-era Chicago neighborhood.

At the turn of the twentieth century, Chicago was known as a hub for the meat packing industry. Thousands of immigrants, particularly from Eastern Europe, flooded into the southwest side Back of the Yards neighborhood to work at the Union Stock Yards. Upton Sinclair famously wrote about this area in his 1906 novel The Jungle.

These immigrants, mainly Bohemians, Moravians, and Slovakians, brought their folk beliefs with them when they came to the Windy City, including a strong belief in witchcraft. We will never know how many accusations, confrontations, and strained relationships this belief caused, but occasionally an accusation of witchcraft made its way to the courthouse and into the press.

Victor Sleeth was an assistant superintendent for Armour & Co., the meatpacking company that defined Chicago’s Back of the Yards neighborhood. Armour & Co. opened in Chicago in 1867 and by 1910 employed over 8,700 people at the Union Stockyards.

Victor’s 22-year-old wife, Mary, had contracted consumption. She was in the advanced stages of the disease when her sister, 21-year-old Augusta Wilke, an assistant foreman at Armour & Co., called in a 50-year-old nurse named Mary Vogel.

Vogel attended to Mary Sleeth for a month, until Mary died on February 2, 1919. On Monday, February 24, William L. Sehlke, a masseur and husband to Mary Vogel’s other sister, Martha, went to the Stockyards police to ask for warrants for the arrest of Mary Vogel and Augusta Wilke.

END_OF_DOCUMENT_TOKEN_TO_BE_REPLACED 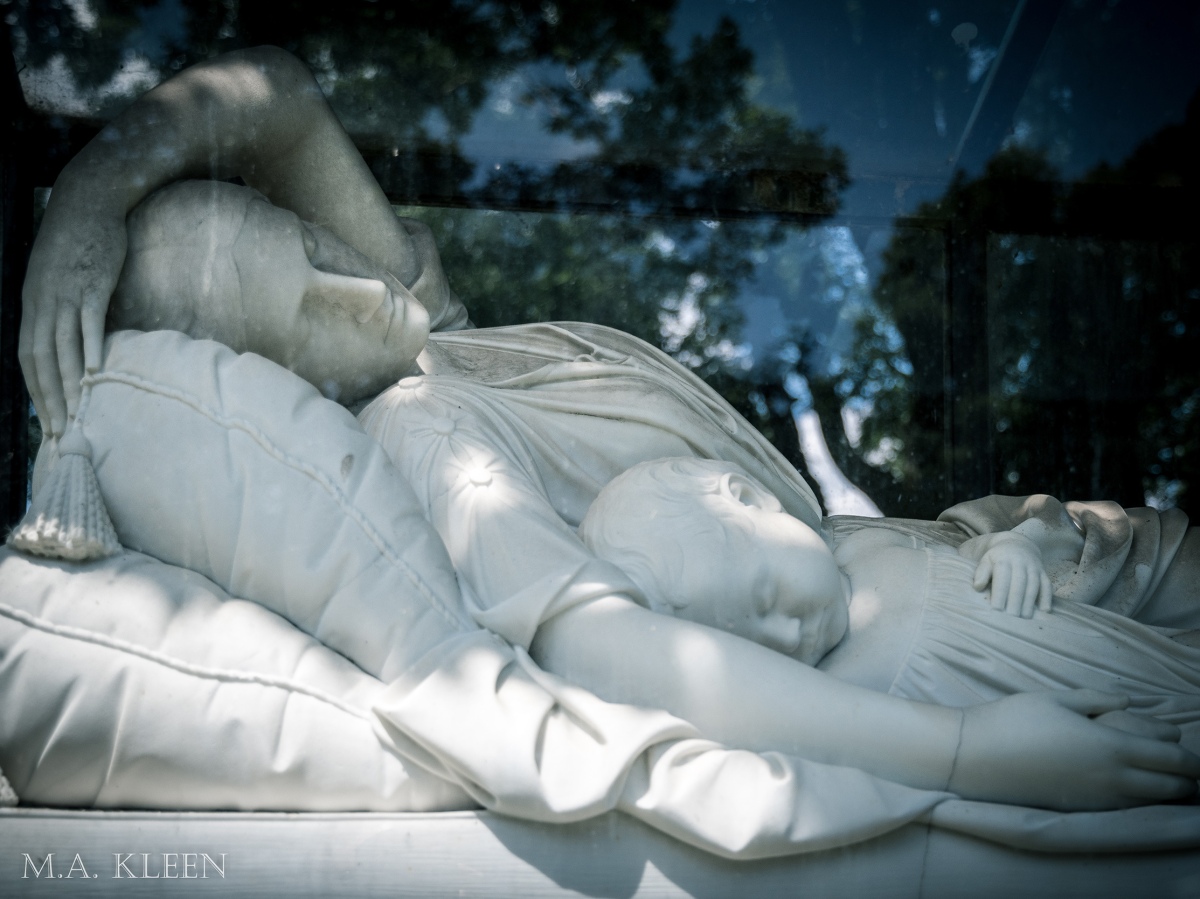 Monument to Frances M. Pearce (1835-1854) and her infant daughter in Rosehill Cemetery, 5800 N Ravenswood Avenue in Chicago, Illinois. Frances, only 18 years old, died in childbirth and her daughter followed a few months later. Her husband, Horatio O. Stone, commissioned this sculpture in their honor, to sleep under a thick layer of glass for all eternity.

Rosehill’s neoclassical mausoleum, the largest in Chicago, was designed by Sidney Lovell and opened in 1914. Four marble Doric columns distinguish its main entrance, and its floors are made from Italian marble. Department store tycoons Aaron Montgomery Ward and Richard Warren Sears are interred inside, as well as Illinois Governor Richard B. Ogilvie.

END_OF_DOCUMENT_TOKEN_TO_BE_REPLACED

Books about Illinois ghostlore have become a “copy and paste” industry, and literally dozens of paperbacks devoid of original content line the shelves. That cannot be said for The Ghosts of Chicago: The Windy City’s Most Famous Haunts by Adam Selzer. Published by Llewellyn Publications in 2013, The Ghosts of Chicago is a necessary addition to any collection of books on Chicago ghostlore. It retails for $18.50 and is 340 pages in length.

“Professional ghost hunter and historian Adam Selzer pieces together the truth behind Chicago’s ghosts, and brings to light dozens of never-before-told firsthand accounts,” the cover promises. Selzer delivers on this promise, not necessarily by adding new locations to our catalog of tales, but by greatly expanding our understanding of well-known stories. That is what makes The Ghosts of Chicago so great—it takes on a simple task and does it better than it has been done for nearly a decade.

Two examples of this are the chapters on Bachelor’s Grove Cemetery and Resurrection Mary. Both are obligatory inclusions in any book about Chicago ghostlore, and you would think not much more could be written about them. Selzer pushes the stories beyond their usual retelling, however.

In the chapter on Bachelor’s Grove, for example, he goes into detail about the famous “ghost photo” of the lady dressed in white sitting on a broken headstone. Unlike most other accounts, he explains the who, when, and how of the photograph—giving credit to the photographer and telling her story.