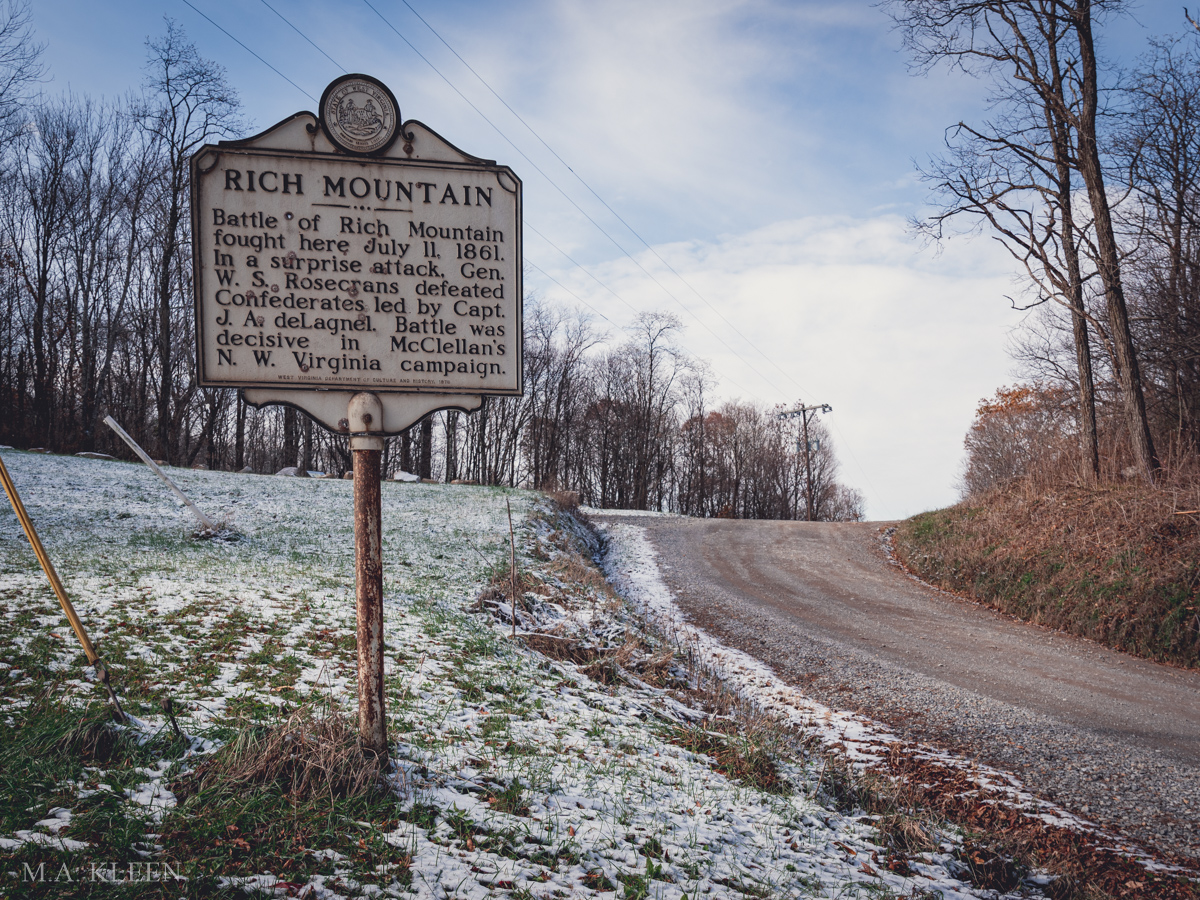 Explore scenic views and the scene of an early Confederate defeat at this rustic mountaintop battlefield.

Soon after Virginia seceded from the Unites States in May 1861 and joined the Confederacy, Union Maj. Gen. George B. McClellan, as commander of the Department of the Ohio, invaded western Virginia under the pretext of protecting unionists there. These western counties would later vote to secede from Virginia and form the state of West Virginia.

Following an ignominious Confederate defeat at the Battle of Philippi in early June, Confederate Brig. Gen. Robert S. Garnett fortified two key mountain passes: one through Laurel Mountain leading to Leadsville and the other through Rich Mountain to Beverly. The smaller force, consisting of 1,300 men and four cannon at Camp Garnett in Rich Mountain, was commanded by Lt. Col. John Pegram.

END_OF_DOCUMENT_TOKEN_TO_BE_REPLACED

See where amateur armies of North and South squared off in this early Civil War battle fought before the Battle of Bull Run.

The Battle of Belington (Laurel Hill) was fought from July 7 to 11, 1861 between Union forces commanded by Brig. Gen. Thomas A. Morris and Confederate forces commanded by Brig. Gen. Robert S. Garnett in Barbour County, West Virginia during the American Civil War. The battle was technically a draw, but defeat at Rich Mountain on July 11 compelled Garnett to abandon his fortified camp at Laurel Hill.

Following an ignominious Confederate defeat at the Battle of Philippi in early June, Brig. Gen. Garnett took command of Confederate forces in western Virginia and fortified two key mountain passes: one at Laurel Mountain leading to Leadsville and the other at Rich Mountain to Beverly. Lt. Col. John Pegram commanded a smaller force at Camp Garnett in Rich Mountain, while Garnett stayed at Camp Laurel Hill with 4,000 men.

Garnett knew his prospects for victory were slim. “I don’t anticipate anything very brilliant–indeed I shall esteem myself fortunate if I escape disaster,” he wrote. His pessimism would be tested on July 7, when Brig. Gen. Morris arrived with his 3,500-man brigade and made camp in nearby Belington (where he soon received reinforcements, bringing his total to 4,000). The two sides skirmished for several days. Morris’ orders were to “amuse” his opponent and prevent him from reinforcing Rich Mountain.

END_OF_DOCUMENT_TOKEN_TO_BE_REPLACED

A historic covered bridge, used as a barracks for Union troops, still stands at the scene of an early Civil War skirmish.

The Battle of Philippi was fought on June 3, 1861 between Union forces commanded by Brig. Gen. Thomas A. Morris and Confederate forces commanded by Col. George A. Porterfield in Philippi, West Virginia during the American Civil War. The skirmish, which was the first in Virginia, was a Union victory that encouraged Western Virginians to secede and form their own pro-Union state. It resulted in 30 total casualties.

By the time Virginia voters ratified the decision of its secession convention on May 23, 1861, Richmond had already been proclaimed the Confederate capital and militia units were mobilizing. As commander of the Department of the Ohio, Union Maj. Gen. George B. McClellan invaded western Virginia under the pretext of protecting unionists there. Western counties would later vote to secede from Virginia and form the state of West Virginia.

McClellan sent 3,000 volunteer troops into western Virginia under the overall command of Brig. Gen. Thomas A. Morris. Opposing them were approximately 800 poorly trained and equipped militia commanded by Col. George A. Porterfield gathered at the town of Grafton. Porterfield retreated to Philippi as the Union army advanced. Morris divided his force into two columns, which converged on Philippi and the Confederates camped there.

END_OF_DOCUMENT_TOKEN_TO_BE_REPLACED

Natural history and a taste of the fantastic awaits you at this subterranean roadside attraction.

Adults and children alike will enjoy this 1/2-mile loop through towering stalagmites and stalactites 235 feet underground. Walk through a continuous room over 1,000 feet long and 120 feet high, slowly hollowed out over millions of years, draining into the nearby Greenbrier River. Stairs, ramps, and railings make the basic tour a breeze for anyone not in a wheel chair.

Lost World Caverns was discovered in 1942, though local farmers had been using its entrance to dump dead livestock and trash for decades. They had no idea what lay just under the surface until scientists from  Virginia Tech began to explore what was then known as “Grapevine Cave”. It was surveyed in the 1960s, and in 1967 the remains of a prehistoric cave bear were discovered.

In the 1970s, the cavern was developed for commercial tourism and in 1973 the National Park Service designated it a National Natural Landmark. Since then, Lost World Caverns has attracted the sensational. In 1971, a man named Bob Addis set the World Record for “Stalagmite Sitting” atop a 28-foot formation called the War Club, and in 1992 the infamous tabloid Weekly World News reported that “Bat Boy” had been caught living in the cave.

END_OF_DOCUMENT_TOKEN_TO_BE_REPLACED

The West Virginia Renaissance Festival is back for a second season! Taso Stavrakis and Dawn Kieninger first opened the festival in 2018, and were undeterred even after a fire destroyed a large Elizabethan-style barn earlier this year. The festival kicked off this past Saturday, June 8th, and will run every weekend in June.

My weather app assured me the rain would stop before I arrived, but when the gates opened at 11am, a steady drizzle still threatened to ruin the fun. Rain already turned the dirt roads at Hollow Hills Farm to mud. Thankfully, this wasn’t enough to deter the festival’s dedicated actors and actresses from performing.

The popular Washing Well Wenches put on a wet and sloppy vaudeville act with plenty of audience participation. These hilarious ladies are just two of many troop members who perform at Ren fairs all over the country.