“Hold At All Costs” is part two in a three-part, 32-minute epic appearing on heavy metal band Iced Earth’s album The Glorious Burden (2004). The three-song serial commemorates the Battle of Gettysburg, July 1-3, 1861. Former Judas Priest frontman Tim “Ripper” Owens provided vocals on the album. The songs appear to be based on either the novel The Killer Angels (1987) by Michael Shaara or the movie Gettysburg (1993), which was also based on the novel. 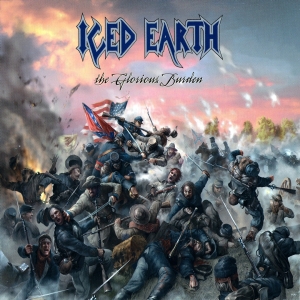 “Just a mile or so away
Lies my dearest friend in this world.
He wears the Blue and I the Gray
And God it hurts me so
The last time we were together
I grabbed his hand and I pledged
If I ever draw my sword on you
May the good lord strike me dead.”

The Union flank’s in trouble
To the Round Top on the double
A bad decision, insubordination
Exposed our line in a dangerous way

The burden lies upon us
Surrender is not an option
We are the flank and if we break
The Union crumbles, We could lose the war!

Down below the carnage
The rebels charging onward
Push the slaughter toward the Peach Orchard.
Through the Wheatfield and Devil’s Den

The valor of the Texans
And Alabama’s best men
They’re unrelenting and devastating
The last full measure of devotion’s clear.

END_OF_DOCUMENT_TOKEN_TO_BE_REPLACED

“The Devil To Pay” is part one in a three-part, 32-minute epic appearing on heavy metal band Iced Earth’s album The Glorious Burden (2004). The three-song serial commemorates the Battle of Gettysburg, July 1-3, 1861. Former Judas Priest frontman Tim “Ripper” Owens provided vocals on the album. The songs appear to be based on either the novel The Killer Angels (1987) by Michael Shaara or the movie Gettysburg (1993), which was also based on the novel.

In July 1863
A nation torn in tragedy
A trick of fate, two great armies merge
Gods of war at Gettysburg
Devastation lies ahead
50,000 bodies litter the land
Hell rages three full days
The reaper sows, there’s the devil to pay

The pressure’s on and the reb’s attack
The yanks must hold, they can’t fall back
Just two brigades, 2,000 strong
Against 20,000 they can’t hold long

[Chorus:]
This tragedy and what it brings
All the devastation
(The reaper has his way)
Men will kill, Blood will spill
To preserve the nation
(There’s the devil to pay)

END_OF_DOCUMENT_TOKEN_TO_BE_REPLACED

American composer Theodore F. Morse and lyricist Edward Madden wrote “Two Little Boys” in 1902 as a music hall song about two brothers who dream of growing up and joining the cavalry. The Country Gentlemen recorded a version for their album Bluegrass at Carnegie Hall (1962). Like “Marching through Georgia,” this song also gained international fame. In 1969, an Australian entertainer named Rolf Harris popularized it on his BBC variety show in the United Kingdom, and today it’s more well-known across the ocean.

Long years had passed, war came so fast
Bravely they marched away
Cannon roared loud, and in the mad crowd
Wounded and dying lay
Up goes a shout, a horse dashes out
Out from the ranks so blue
Gallops away to where Joe lay
Then came a voice he knew

END_OF_DOCUMENT_TOKEN_TO_BE_REPLACED

Henry Clay Work, a Connecticut composer and songwriter, wrote this song in 1865 to commemorate Major General William T. Sherman’s “March to the Sea”, near the end of the American Civil War. It became wildly popular and its tune and lyrics were adopted by other countries to celebrate their own military achievements. Its music is even used for two high school anthems in Sydney, Australia!

Bring the good old bugle, boys, we’ll sing another song;
Sing it with a spirit that will start the world along,
Sing it as we used to sing it, fifty thousand strong,
While we were marching through Georgia.

Hurrah! Hurrah! We bring the jubilee!
Hurrah! Hurrah! The flag that makes you free!
So we sang the chorus from Atlanta to the sea,
While we were marching through Georgia.

How the darkeys shouted when they heard the joyful sound!
How the turkeys gobbled which our commissary found!
How the sweet potatoes even started from the ground,
While we were marching through Georgia.

END_OF_DOCUMENT_TOKEN_TO_BE_REPLACED 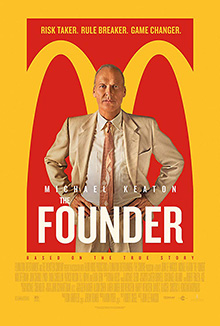 The Founder (2016) stars Michael Keaton as Ray Kroc, who took a local California fast food restaurant called McDonald’s and turned it into a global, multi-billion dollar empire. Nick Offerman and John Carroll Lynch co-star as McDonald’s founders Richard and Maurice McDonald. It was written by Robert Siegel and directed by John Lee Hancock, who also directed Saving Mr. Banks (2013) and The Blind Side (2009).

Ray Kroc was born in Oak Park, Illinois and he opened his first McDonald’s franchise on Lee Street in Des Plaines, where I grew up. I passed by the old McDonald’s museum hundreds of times, but never knew the story of how McDonald’s got its start. Ray Kroc himself was responsible for much of the popular mythology behind the company’s founding. His claim of being “the founder,” despite his first McDonald’s restaurant actually being the ninth, was so ostentatious, it turned out to be the perfect title for a film about his life.

The film charts Ray Kroc’s rise from struggling milkshake salesman to restaurant/real estate mogul, his tumultuous relationship with the McDonald brothers and his wife Ethel (Laura Dern), and his unshakable faith in persistence. The movie’s first half tells the inspiring story of how Kroc turns around his business prospects despite daunting odds. The second half shows him screwing over everyone who helped him along the way, even stealing a restaurant owner’s wife.

The Founder is historically accurate, for the most part. Some of Kroc’s relationships are simplified for the sake of plot, including omitting a brief second marriage before marrying Joan, the restaurant owner’s wife. In real life, Joan was not actually married to the restaurant owner as the film depicts, but to another man who became a manager at McDonald’s. It also omits Ray’s daughter, Marilyn.