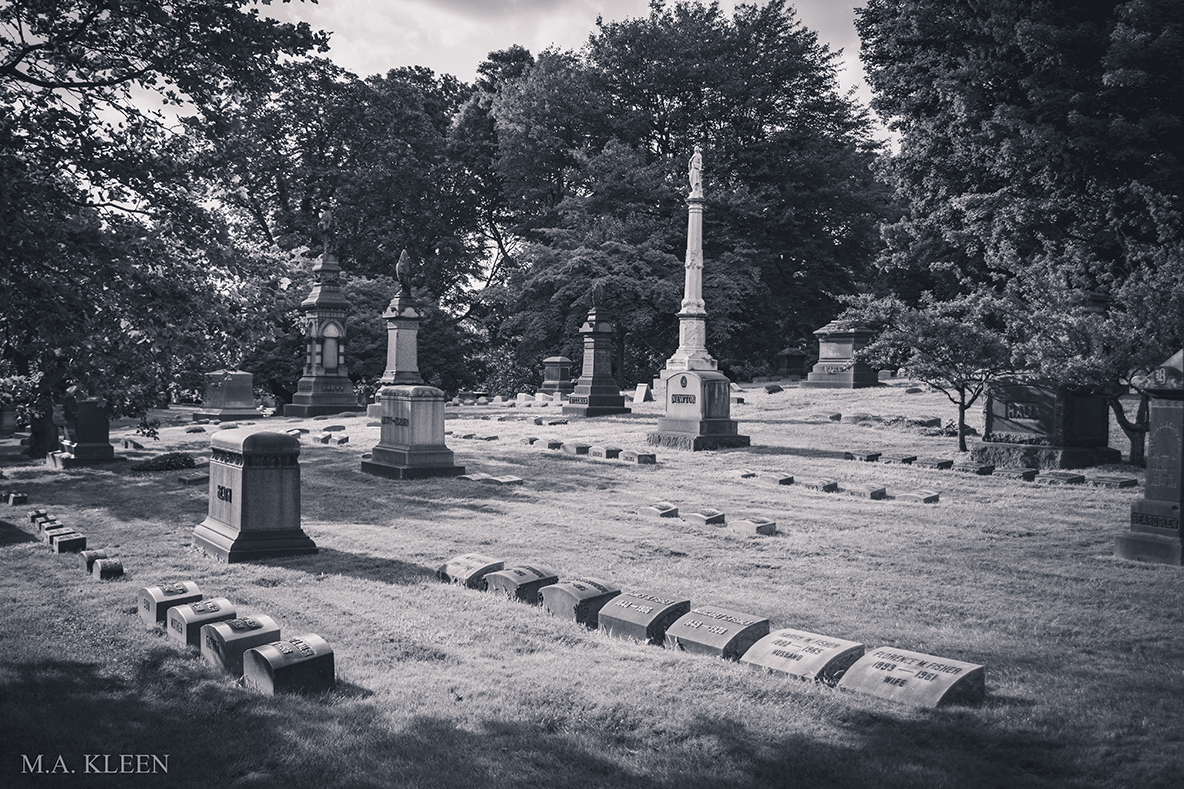 Established in 1869 as a nonprofit garden cemetery, Lake View Cemetery at 12316 Euclid Avenue in Cleveland, Ohio contains a veritable who’s who from Cleveland’s once-storied past, including the remains of U.S. President James A. Garfield. Over 110,000 former residents are interred in its sprawling 285 acres.

This larger-then-life statue is dedicated to Scottish-American steel magnate Henry Chisholm (1822-1881). Chisholm emigrated to Montreal, Quebec at the age of 20. He steadily built a thriving construction business, then bought the Cleveland Rolling Mill with his brother in 1857. It became one of the largest steel companies in the U.S. His wife, Jean Allen, and he had five children. They are not buried beneath this monument (designed by sculptor Charles Henry Niehaus) but in the family mausoleum nearby.

This intimidating monument was erected in memory of U.S. Secretary of State John Milton Hay (1838-1905). Hay was a lawyer and Abraham Lincoln’s private secretary. He served President William McKinley as Ambassador to Great Britain, and then Secretary of State in 1898. He continued in that position under President Theodore Roosevelt. He was also an author who wrote a ten volume biography of Abraham Lincoln. His epitaph reads: “The fruit of righteousness is sown in place of them that make peace.”

END_OF_DOCUMENT_TOKEN_TO_BE_REPLACED

The Siege of Yorktown was fought from September 28 to October 19, 1781 between American and French forces commanded by General George Washington and Marshal Comte de Rochambeau, and British forces commanded by Lt. Gen. Charles Cornwallis during the American Revolutionary War. The battle was a complete American and French victory, with Cornwallis and his army surrendering. Approximately 1,200 soldiers from either side were killed or wounded.

In July 1781, American forces commanded by George Washington met French forces commanded by Comte de Rochambeau north of New York City, where they faced a decision. They could either use their combined force to besiege British controlled New York City, or move south to confront a British army under Charles Cornwallis, which had won a costly victory in North Carolina at the Battle of Guilford Courthouse before marching north into Virginia. They chose to move south.

Cornwallis, commanding approximately 7,000 British and 3,000 Hessian troops, had been ordered to build a deep water port at Yorktown on the Virginia Peninsula. On September 26, Washington and De Rochambeau consolidated a force of 18,900 men in nearby Williamsburg. With help from François Joseph Paul, comte de Grasse’s fleet, they bottled up Cornwallis’ men and settled in for a siege.

END_OF_DOCUMENT_TOKEN_TO_BE_REPLACED 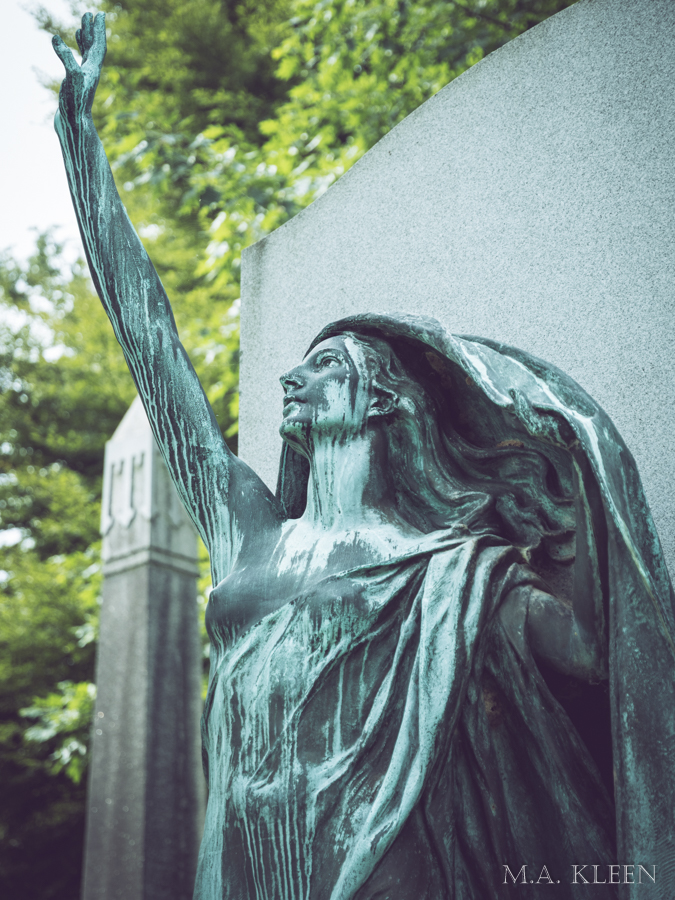 This freestanding bronze statue of a cloaked woman in Forest Lawn Cemetery, 1411 Delaware Avenue in Buffalo, New York, was designed by Philadelphia sculptor Harriet Whitney Frishmuth and titled “Aspiration.” It commemorates iron mogul William A. Rogers (1851-1946) and his wife, Eleanor Silliman Rogers, a trustee of Buffalo General Hospital. This statue is one of three in existence.

Explore scenic views and the scene of an early Confederate defeat at this rustic mountaintop battlefield.

Soon after Virginia seceded from the Unites States in May 1861 and joined the Confederacy, Union Maj. Gen. George B. McClellan, as commander of the Department of the Ohio, invaded western Virginia under the pretext of protecting unionists there. These western counties would later vote to secede from Virginia and form the state of West Virginia.

Following an ignominious Confederate defeat at the Battle of Philippi in early June, Confederate Brig. Gen. Robert S. Garnett fortified two key mountain passes: one through Laurel Mountain leading to Leadsville and the other through Rich Mountain to Beverly. The smaller force, consisting of 1,300 men and four cannon at Camp Garnett in Rich Mountain, was commanded by Lt. Col. John Pegram.

END_OF_DOCUMENT_TOKEN_TO_BE_REPLACED

Monument to Maj. Gen. George Edward Pickett in Hollywood Cemetery, 412 S. Cherry Street in Richmond, Virginia. George E. Pickett (1825-1875) was a US Army officer who joined the Confederate Army at the outbreak of the American Civil War. Pickett was wounded at the Battle of Gaines’ Mill in 1862 but is mainly known for leading an ill-fated attack at the Battle of Gettysburg popularly known as Pickett’s Charge.

His career ended ignominiously when he lost the Battle of Five Forks in 1865, just eight days before General Robert E. Lee’s surrender at Appomattox. Pickett was married three times. His third wife, LaSalle Corbell Pickett, was 18 years his junior.