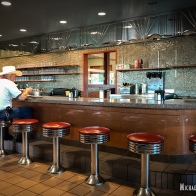 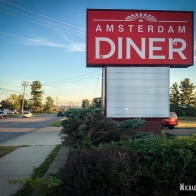 North of Amsterdam in the Mohawk Valley, nestled among strip malls near the intersection of Route 30 and Log City Road, sits the Amsterdam Diner. This is the latest establishment to go by that name. Apparently there was an older Amsterdam Diner south of town off Exit 27. This establishment used to be called the Olympic Diner, but came under new ownership. It is a modern or Greek-style diner.

It wasn’t busy when I stopped in for dinner. An old, wiry cowboy sat at the counter and a few families were scattered around the restaurant. I ordered a Greek wrap, which consisted of grilled chicken, fresh baby spinach, mushrooms, honey mustard dressing, and chunks of feta cheese with fries and a small side of coleslaw for $8.99. It was pretty good for the price.

The Amsterdam Diner has a traditional menu mixed with ethnic Greek and Italian cuisine. Italian dishes are mostly parmigiana, which is usually a fried eggplant dish. They offer variations with cheese ravioli, chicken cutlet, butterfly shrimp, and chopped steak. Greek dishes include something called “Spinach Pie and Rise” for $12.99.

The Amsterdam Diner has a 4.2/5 average out of 99 Google reviews and 4.0/5 average on Yelp. Yelp-user Lydia K. from Ballston Spa, New York wrote, “Clean. Adequate parking. The waitress was nice and on top of refilling our drinks which is always nice. We had sandwiches and fries. It was all tasty, hot and fresh. $25 was the damage which was more than reasonable. Definitely worth a stop.”

Apparently the diner recently came under new ownership and has improved over previous years. “The food is very good. Far better food and atmosphere than the previous restaurant in this same location,” Google-user blessedbrothersny wrote. “DO NOT get it confused with the previous restaurant. Four stars just because I think the prices are quite high for a diner in the area. They are packed on Sundays but always have adequate seating.”

Not everyone has been happy. “This is by far the worst place I have ever been to eat in my life,” Google-user Angel Pestcontrol complained. “This is where restaurant impossible should film their next show. You get an F. I can only imagine what goes on in the kitchen and what is being done to the food they serve the customers.” This patron’s experience was far outside the norm.