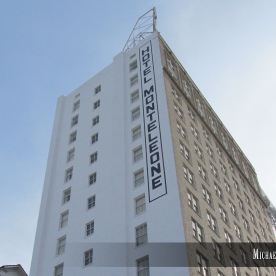 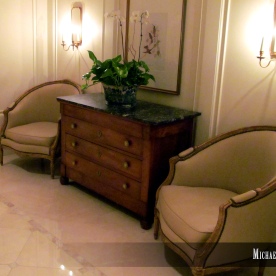 Superstitious planners omitted the 13th Floor from this majestic hotel, but was the precaution enough to prevent it from becoming haunted? Some visitors say “No.”

Hotel Monteleone is such a fixture of cultural life in New Orleans, the city’s fabled French Quarter is said to begin in its lobby. Antonio Monteleone, a Sicilian immigrant, opened this beautiful and historic Beaux-Arts style hotel at 214 Royal Street in 1886. Easily recognizable, it is the only high-rise building in New Orleans.

It contains 600 guest rooms, two restaurants, a heated rooftop pool, and a rotating bar called the Carousel Piano Bar and Lounge. Over the years, the hotel has developed a reputation for being haunted by as many as a dozen different specters.

In 1954, Antonio’s son, Frank, razed the original structure and reimagined it as the luxury hotel that stands today. The sky terrace, swimming pool, and cocktail lounges were added in 1964. Throughout its history, many literary figures, including Ernest Hemmingway, Tennessee Williams, William Faulkner, and Anne Rice (among others), have stayed there.

Locals have long believed a plethora of spirits, including former employees, a man named William “Red” Wildemere, and a toddler named Maurice, haunt Hotel Monteleone. According to the hotel, “Generations of hotel guests and staff have regularly experienced haunted events that would cause even the staunchest skeptic to take pause.

This haunted hotel in New Orleans had a restaurant door that opens almost every evening and then closes again, even though it is locked. An elevator that stops on the wrong floor, leading a curious couple down a hallway that grows chilly and reveals the ghostly images of children playing.”

The ghost of a young boy named Maurice allegedly haunts the 14th Floor (actually the 13th—the hotel skipped the number 13 when they numbered the floors). According to legend, he was the son of Josephine and Jacques Begere, who were in town to visit the French Opera House on Bourbon Street.

The Begeres left their son in the care of a nanny while they attended the opera. On their return, their horses became spooked and threw Jacques from their buggy, killing him. Soon after, his wife died of a broken heart. Hotel guests and staff believe young Maurice still wanders the hotel, searching for his parents in the afterlife.

In 2012, a woman named Phyllis Paulsen reportedly encountered the ghost of Maurice. She told hotel staff, “I was just relaxing in bed one morning when I looked up to see a young boy about three years old walk by the foot of my bed. Since he had come from the sitting room, I immediately got up to see if the door was open and to check if a parent may have followed him into the room. My husband had just left for a meeting and I thought he may not have closed the door all the way… It didn’t take me long to realize that I had seen a ghost.”

Larry Montz of the International Society for Paranormal Research investigated Hotel Monteleone in 2003 and allegedly uncovered over a dozen ghosts. Among those mentioned earlier, “Solemn John,” a businessman from Tennessee who committed suicide after one too many failed investments, makes his appearance. Two lovers who made a suicide pact at the rooftop pool are also believed to haunt the hotel.

With such inspiring architecture and a storied past, it is no wonder Hotel Monteleone has appeared in several movies and televisions shows. Expect to pay over $200 a night, but with an onsite parking garage and Bourbon Street in walking distance, and a chance to walk the same halls as Ernest Hemmingway and William Faulkner, it is worth every penny.

If you request it, you might even get the chance to stay on the 14th Floor and have an encounter with the unseen. Failing that, you can still visit everything else the French Quarter has to offer while enjoying some of the best accommodations New Orleans has to offer.