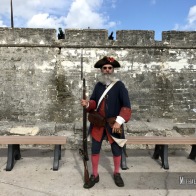 In May 1668, Captain Robert Searle and 70 English buccaneers arrived at St. Augustine to sack the city. In the process, they freed Henry Woodward, first settler of South Carolina, from Spanish prison. In response to the daring raid, Governor Francisco de la Guerra y de la Vega ordered construction of a stone fort on the western shore of Matanzas Bay.

That fort was the Castillo de San Marcos, today the oldest masonry fort in the continental United States. It was built between 1672 and 1695, and changed hands five times between 1763 and 1862.

The Castillo de San Marcos was designated a national monument in 1924 and is currently managed by the National Park Service. In addition to preserving a rich historical legacy, the fort offers beautiful views of Matanzas Bay and the Atlantic Ocean.

The British laid siege to the fort twice, once in 1702 and again in 1740, both times failing to penetrate its thick, coquina walls. Coquina is a rock comprised of shell fragments from an assortment of ocean invertebrates. Because the rock is soft, cannonballs sink into it instead of crack or puncture the fortress walls.

When the British finally acquired the fort in 1763, they renamed it Fort St. Mark and housed American prisoners there during the Revolutionary War. The Spanish regained the fort in 1784, but then lost it to the United States in the Adam-Onis Treaty (1819).

The U.S. renamed it Fort Marion after General Francis “Swamp Fox” Marion, and after the Civil War it was used to house prisoners from the western Indian Wars. At least 24 Apaches died during their confinement.

All this history has, of course, led to ghost stories. Among other tortured spirits, the ghost of English privateer Andrew Ranson is said to wander the grounds, alongside Spanish soldiers. Incredibly, some visitors also claim to have seen the disembodied head of Seminole Chief Osceola!

I have only heard about this spectacular place and I know that it’s one of the oldest masonry forts in the US. Thanks for bringing it closer and motivating me to add it to my bucket list. Keep up the awesome work, Michael!