In the spring of 2014, I had the opportunity to travel to Badlands National Park with an old friend. On the way, we ran into “Winter Storm Xenia,” which hit parts of Minnesota, North Dakota, South Dakota, and northeast Wyoming. There were 5-6 foot snow drifts in Roseau, Minn and wind gusts of up to 64 mph in Rapid City. The storm cleared up the next day, but left a dusting of snow all over the Badlands.

Growing up in Illinois, I had no concept of “wide open spaces.” It’s incredible to see golden, unbroken prairie stretching to the horizon under a big blue sky. At the Badlands, the earth just seems to fall away into huge rippling land forms. I got this shot of my friend (a better photographer than I’ll ever be) in action at the canyon edge. 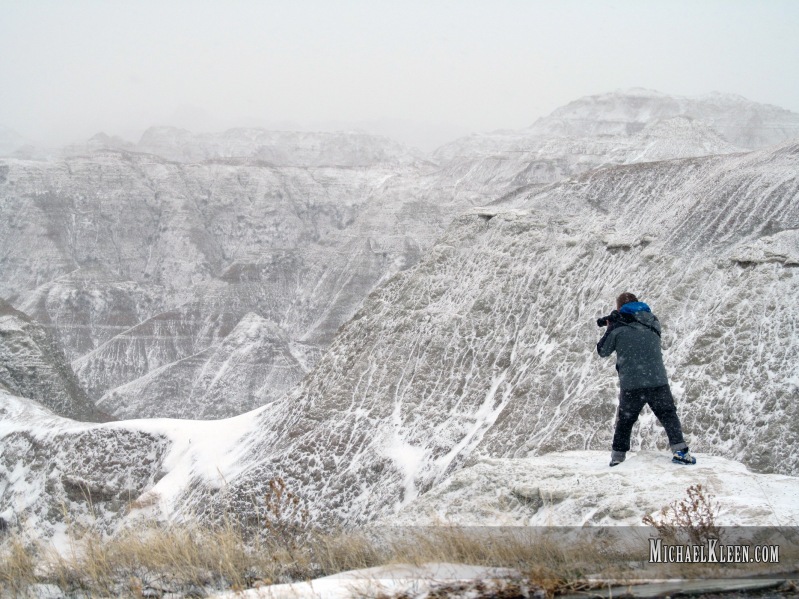 Badlands National Monument was established on January 25, 1939, and it became a national park in 1978. It consists of 379 square miles of land, offering hiking trails, camping sites, and  educational visitors centers. People even come to find fossils.

The Badlands formed when soft sedimentary rock slowly eroded over half a million years. Buttes, pinnacles, and spires are the three main land forms you’ll see at the park.

A variety of animals live in the Badlands, including bison, mule deer, white-tailed deer, Rocky Mountain bighorn sheep, and pronghorn. You’re not supposed to get within 100 yards of them, but they come pretty close to the roadside. A small herd of mule deer are depicted below. Mule deer have black tipped tails and large ears.

Rocky Mountain bighorn sheep are known for their large, round horns. We were lucky to catch a glimpse of a few grazing on the prairie. 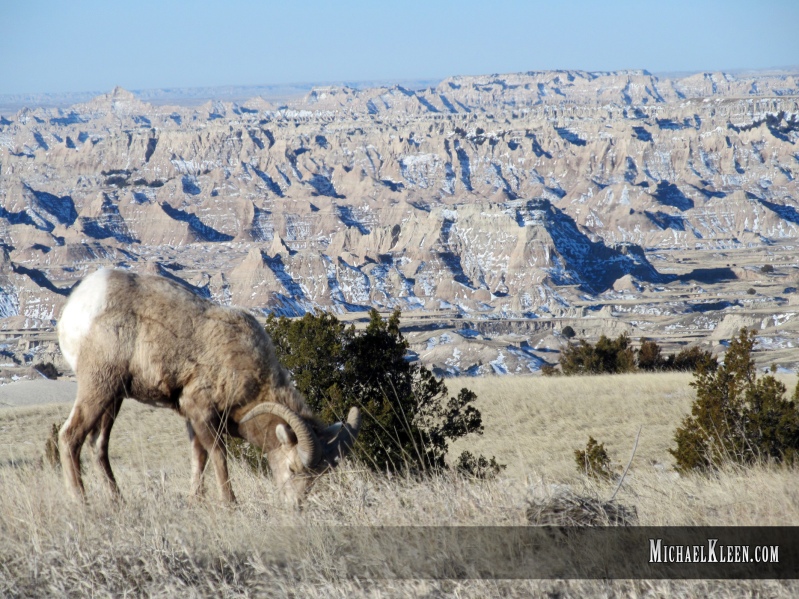 We drove through the Badlands twice, once on our way out west and again on our way back home, since snow cut short our first visit. In the picture below, you’ll see what I mean about “wide open spaces.” We have some great views in Illinois, but nothing compared to this. 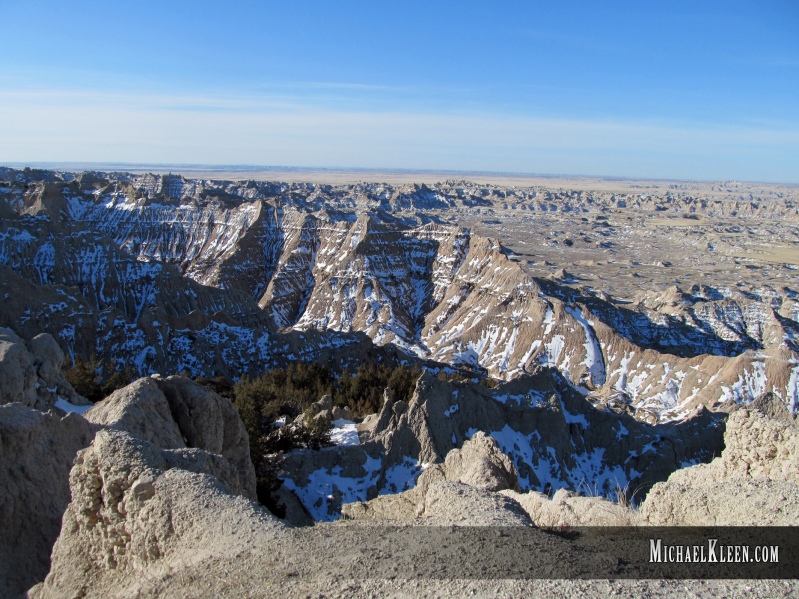 It takes a full hour to drive the entire loop road without stopping, but it’s well worth the trip. All roads are open 24 hours a day, year-round, so you can get some spectacular views of sunrise and sunset.

[…] an article all its own. I visited Deadwood on a trip that took me to Sturgis, Custer State Park, the Badlands, Devils Tower, and Mount Rushmore, among other places. I’m a huge fan of the old West, so I […]

[…] I traveled to South Dakota and parts of Wyoming, stopping at Sturgis, Deadwood, Custer State Park, the Badlands, Devils Tower, and elsewhere. While the Badlands and Devils Tower were visually magnificent, Mount […]

[…] I traveled to South Dakota and parts of Wyoming, stopping at Sturgis, Deadwood, Custer State Park, the Badlands, Mount Rushmore, and many other cool places. Devil’s Tower was our last stop. That region […]